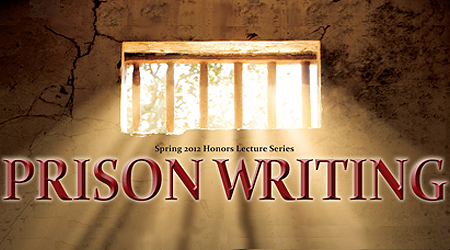 Dr. Philip Phillips, who offered an introductory lecture on Jan. 23, presented “Boethius’s Consolation of Philosophy and Philosophy’s Consolation to the Prisoner” in his second lecture Jan. 30.

Lectures are held in Room 106 of the Paul W. Martin Sr. Honors Building. The 55-minute lectures begin promptly at 3 p.m. and are open to the public. The 12-week series will be held every Monday except March 5, when students and faculty are on spring break.

Dr. Mark Jackson of the MTSU English department will lead a special honors lecture, “Lead Belly,” from 4:30 to 5:30 p.m. on Tuesday, April 3. For the series lineup, visit http://mtsu.edu/honors/lecture-series/ or click on the graphic at right for a printable PDF of the lecture-series flier.

“This semester’s Honors Lecture Series on ‘Prison Writing’ examines selected works of writers from the sixth century to the 21st century, who were imprisoned for their beliefs and who drew strength from their prison experiences to advance their respective causes and inspire others in the process,” says Phillips, an English professor who also is interim associate dean for the Honors College.

Dr. Phillip Phillips, MTSU English professor and interim dean of the University Honors College, pauses inside Riverbend Correctional Facility in Nashville, where he teaches a “Great Books in Prison” course.

“Each author epitomizes the tradition of speaking truth to power and being willing to sacrifice physical freedom, or even life itself, in the service of that truth,” Phillips says. “Several of the authors included in the series allude to the examples of their predecessors, a practice that illustrates that many those freedoms we enjoy today are the result of the struggles of those who fought to attain them.

“It should also remind us that those freedoms that are still denied to us might yet be attained if we commit ourselves wholly to achieving them. All of the lectures in the series will provide an overview of the authors’ lives, offer a close analysis of their works, and discuss the context and significance of their representative prison writings.”