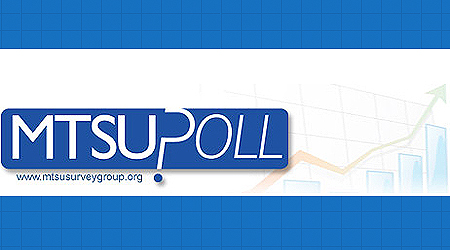 Forty percent of Tennessee Republicans in the poll favor Santorum compared to 19 percent who prefer Romney. Another 13 percent support Newt Gingrich, and 11 percent back Ron Paul.

“Tennessee appears to be heading into Santorum’s Super Tuesday column,” said Dr. Jason Reineke, an assistant professor in the college’s School of Journalism and the MTSU Poll’s associate director. “Election watchers would be wise to remember, though, just how many factors polling cannot measure or foresee, especially in the context of a primary election.”

“These percentages could reverse overnight if the Election Day problems that opponents of the law are predicting materialize,” said Dr. Ken Blake, MTSU associate professor of journalism and director of the MTSU Poll. “But with so many Tennesseans expressing support and so few undecided, these attitudes appear unlikely to change unless there’s a pretty compelling turn of events or shift in the debate’s frame.”

Eighty-three percent of Tennesseans say they are aware of the voter ID law, a significant increase from 71 percent in the fall MTSU Poll. However, Tennesseans remain confused about some aspects of the law.

While sizable majorities correctly answer that acceptable forms of ID include a current Tennessee driver’s license (93 percent) and a valid U.S. military ID (81 percent), only 21 percent know that an expired Tennessee driver’s license is also acceptable. Meanwhile, less than a majority (46 percent) know that “a valid employee ID issued by a major automaker to a worker at one of its Tennessee plants” would be unacceptable, and only 29 percent know that a valid University of Tennessee student identification card would be unacceptable.

Knowledge about the acceptability of an expired driver’s license and of a U.S. military ID has risen since last fall’s MTSU Poll. Overall knowledge of the law’s particulars has remained flat, though, with Tennesseans correctly answering an average of 2.7 of the five questions about which IDs are accepted.

In other poll findings:

Conducted Feb. 13-25 by the College of Mass Communication at MTSU, the scientifically valid telephone poll of 646 randomly selected Tennessee adults has an error margin of plus or minus four percentage points at the 95 percent level of confidence.

For more than a decade, the Survey Group at MTSU has been providing independent, non-partisan and unbiased public opinion data regarding major social, political, and ethical issues affecting Tennessee.

The poll began in 1998 as a measure of public opinion in the 39 counties comprising Middle Tennessee and began measuring public opinion statewide in 2001.

Learn more and view the full Spring 2012 report at www.mtsusurveygroup.org.