Woods, associate professor of African American history in the Department of History, discussed “Structural Racism and the Construction of Place” with the 45 class members in the Monday, Feb. 8 lecture. (Watch above)

Every spring and fall semester, the Honors College offers an upper-division class on a topic of interest, bringing in MTSU faculty and renowned experts from beyond the university to share their knowledge at 3 p.m. every Monday through April 5.

Because of COVID-19, the Social Justice lecture series will remain virtual via Zoom for class members only. The Honors College will make them available to the public within 24 to 48 hours after the class ends. To watch videos from the lecture series, go here and click on the blue YouTube button.

“I will look at some of the historical barriers and access to fair housing,” added Woods, recounting his grandfather, Melvin Grant, serving with other men on “the historical USS Mason (DE-529), the first trans-Atlantic vessel with a predominantly Black crew successfully completing five convoys across the Atlantic in World War II.”

“It took my grandfather 21 years to buy a home, despite earning a no down payment federally-endorsed GI Bill home loan,” said Woods, who added that his grandfather’s story is not abnormal. “The racial barriers of the postwar era superseded his heroic military service.

Woods said that between 1934-62, after investing more than $100 billion dollars into the private American housing market, the federal government helped Americans double their national rate of homeownership during this time period. But access to upward mobility was often dictated by veteran’s race.

“Where we live influences taxes, health care, encounters with police and wealth,” added Woods. … “A zip code is a destiny. Where people live is not an act of God; it was intentional. The federal government chose winners and losers. Black people were on the wrong side of policy. … Today, African American wealth is approximately one-tenth of their white counterparts.”

Philip Phillips, Honors College associate dean and English professor, said he “consulted with Woods in the early stages of planning for the series about possible topics and speakers, and he was very helpful.”

“Louis’ lecture is central to the series because it will address systemic racism and some of the ways that it continues to undermine the possibility of true ‘equality’ in our country for many people, especially Black Americans,” Phillips added.

At MTSU, Woods has been the Africana Studies program director and president of the Black Faculty and Staff Association.

An array of topics, gifted speakers

Phillips has invited mostly MTSU speakers to address Social Justice “from a diverse range of disciplinary perspectives and personal experiences,” he said.

“Students will have the opportunity to ask questions and engage in meaningful dialogue with the speakers and each other about social justice,” he added.

The first keynote, H. Richard “Rich” Milner IV, Cornelius Vanderbilt chair of Education at Vanderbilt University’s Peabody College, began the series Feb. 1 and “challenged us to ask ourselves what we are doing, what we can do to uplift others and to make our world a better place for all people,” Phillips said.

LGBT+ student activism, women’s equality working during the Depression, immigrant identity and African Americans’ current fight for voter justice are among the topics.

Phillips said the inspiration for this semester’s series comes from “MTSU’s stated commitment to diversity in all its manifestations in the university’s Academic Master Plan, the words of the True Blue Pledge (https://www.mtsu.edu/trueblue/pledge.php) and President Sidney A. McPhee’s Taskforce on Social Justice and Equality. 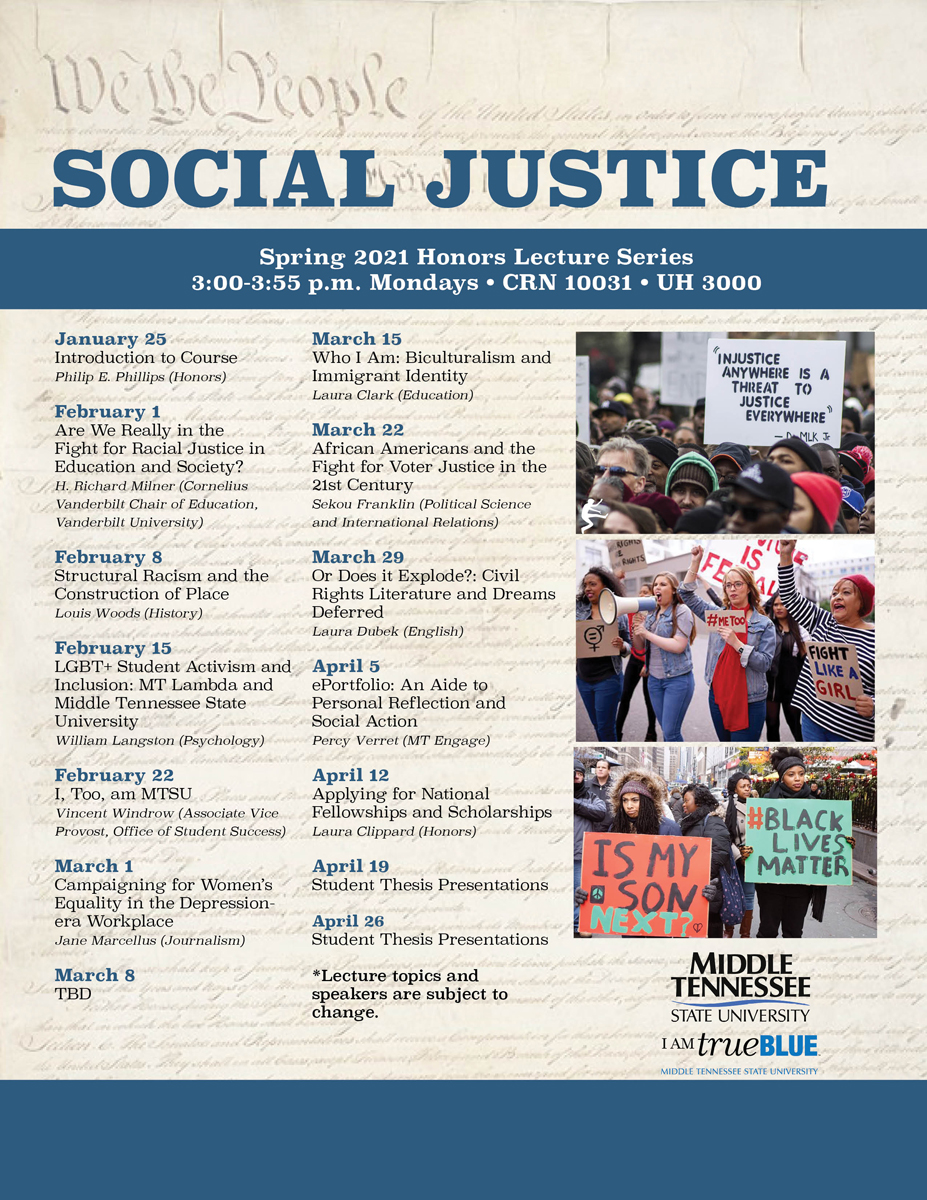 Click the image for a full-sized pdf version of the calendar.