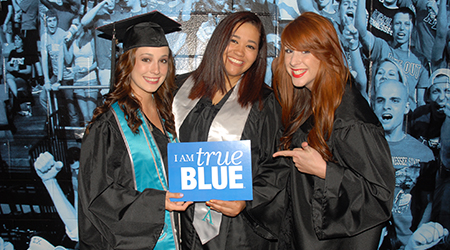 More than 2,640 MTSU students joined their family, friends, professors and other supporters in Murphy Center today to celebrate one of their greatest and most challenging accomplishments: earning a university degree.

“You are joining a legion of folks who are contributing not just to our state but to the entire country,” Gov. Bill Haslam told graduates at the morning ceremony for MTSU’s spring 2013 commencement exercises.

MTSU recognized two of those “people of quality” today when President Sidney A. McPhee presented former Congressman Bart Gordon and the family of the late Nobel laureate James M. Buchanan, with honorary Doctor of Letters degrees.

Gordon, an honors graduate of MTSU’s Class of 1971 who represented the 6th District in the U.S. House of Representatives for 26 years, grinned and shrugged as McPhee placed the ceremonial gold doctoral hood over his head at the morning ceremony.

The Washington, D.C.-based attorney also holds an honorary Doctor of Laws degree from Rensselaer Polytechnic Institute in New York, a law degree from the University of Tennessee-Knoxville and a 2012 designation of “Officer” in the French Legion of Honor.

Buchanan received the Nobel Memorial Prize in Economic Sciences in 1986 for his work on the “Public Choice” theory of economics.

His sister Liz Bradley, also an MTSU alumna, accepted the honorary doctorate on his behalf at the afternoon commencement ceremony.

The Buchanan family presented a $2.5 million gift to the University Honors College on May 9 as well as Buchanan’s Nobel medal and other memorabilia. (You can learn more about the gifts here.)

Buchanan, who graduated first in the Class of 1940 at then-Middle Tennessee State Teachers College after majoring in social sciences, English and mathematics, taught economics at UT and several other universities.

He was professor emeritus and advisory general director of the James M. Buchanan Center for Political Economy at George Mason University when he died in January at age 93.

“These are the first honorary degrees to be conferred in the history of this university,” McPhee told the near-capacity crowd.

“I can’t think of any two individuals more appropriate to receive these honors. They recognize people whose life reflects exceptional achievement … and who inspire others in the community to emulate the recipient.”

“Be honest,” Fisher, a 1987 recording industry graduate and 2004 distinguished alumnus, said. “Be authentic. Have integrity. Be accessible … and persevere. Keep an attitude of gratitude for all who’ve helped you reach this point and for all you’re given.”

Of the 2,642 students receiving their degrees in today’s dual commencement ceremonies, 2,115 were undergraduates and 527 were graduate students, including 510 master’s candidates and education-specialist recipients and 12 doctoral candidates. Five graduate students also received graduate certificates.

Chelsey Meek of Thompson’s Station, Tenn., was among the anxious graduates gathered in one of the auxiliary gyms in lower Murphy Center preparing to march toward a bright future.

“I’m so excited. It’s been a very long journey, but well worth it,” said Meek, a K-6 interdisciplinary studies major. “Late nights studying, tough professors … there were some struggles along the way, but it’s paying off today, for sure.”

Now that she’s a proud alumnus of the No. 1 producer of teachers in Tennessee, Meek will start her search for a teaching position in an elementary school, preferably in-state.

“I absolutely love kids, and my heart is anywhere that a child is,” she said. “My passion is to help children learn.”

Richard Nelson of Murfreesboro already has three job offers — one in California, two in Tennessee — to consider as a new alumnus of MTSU’s nationally recognized concrete industry management program. Nelson is leaning toward staying closer to home.

“In my program, concrete industry management, it’s amazing all the faculty that help you,” he said. “They give you opportunities. They reach out to other companies and try to give you job opportunities immediately coming out of college.”

Fellow graduate D’Juan Epps of Murfreesboro said he feels “blessed” to be an MTSU graduate with a degree in business administration, but he’s also already considering pursuing a master’s degree in sports management.

“Something within basketball operations, that’s my love, that’s my passion, so that’s eventually what I’d like to do,” said Epps, who will use his current degree to move into a full-time position with the Veterans Administration.

For 21-year-old Molly Amber Jones, commencement was the perfect culmination of a journey that began with her childhood love of country music.

“I can appreciate all kinds of music, but country has always been the one that I connect most with,” said the recording industry major from Kingston, Tenn.

Jones said she played flute in her high school band and a little bit of piano, but she aspires to land a job in music publishing. She said her MTSU education has been “wonderful,” especially her upper-division courses, in which she performed more hands-on work.

“I don’t know if I could get a job if I hadn’t had that experience and made those connections,” Jones said.

MTSU graduates D’Juan Epps, left, and Richard Nelson, both of Murfreesboro, are all smiles before graduation ceremonies Saturday at Murphy Center. Epps earned a degree in business administration, and Nelson’s degree is in concrete industry management. (MTSU photo by News and Media Relations)

Molly Amber Jones, a recording industry major from Kingston, Tenn., waits with her fellow students for the afternoon processional of the spring 2013 commencement ceremony. (MTSU photo by News and Media Relations)

A group of happy MTSU students prepare to receive their degrees at the spring 2013 commencement ceremony. (MTSU photo by Classic Photography)

You can see more photos from the spring 2013 morning commencement ceremony here. Photos from the afternoon ceremony are available here. You also can watch another brief video from the day’s events below.