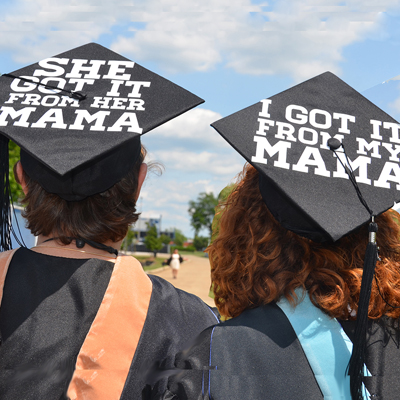 Mother and daughter Barbara Adkerson, left, and Amber Morton of Smyrna, Tennessee, smile outside MTSU’s Murphy Center May 6 before accepting their degrees in the university’s inaugural College of Graduate Studies commencement. (MTSU photo by News and Media Relations)

With family members from as far away as Virginia and Ohio joining them in Murphy Center for the ceremony, mom Adkerson, 55, received her Master of Business Administration, and daughter Morton, 28, earned her master’s in education in teaching English as a second language.

“This just has been a bond-strengthening thing for us,” said Morton, who plans to continue teaching ESL in grades K-1 at La Vergne Primary. “I’ve been thinking how great the semester has been.

“It is awesome that we’re graduating on a weekend that emphasizes the bond between a mother and her children,” Morton added.

The May 6 event was the first in a two-day spring 2016 commencement celebration at MTSU that will see a total of 2,383 students receive their degrees. On May 7, 2,034 undergraduates accepted their MTSU diplomas at 9 a.m. and 2 p.m. ceremonies; you can get more details about that event here.

Noting that MTSU has been conferring master’s degrees since 1952 and doctorates since 1970, university President Sidney A. McPhee said this first-time ceremony for graduate students, independent of MTSU’s undergrad event, reinforces the importance of the university’s mission.

“It’s long been my belief that the graduation ceremony is the single most important event at this university,” McPhee said, commending the students for their dedication.

He’s taught at MTSU since 1985, working regularly with graduate students, and had the opportunity Friday to present one of his doctoral students in public history, Thomas Robert Flagel, with the colorful Ph.D. hood.

“You students who have come here wanting to achieve, you’ve done it, you’ve been committed to the field, and you deserve every great round of applause, cheers, whatever it takes tonight. You’ve earned it. Congratulations,” he told the crowd.

“It’s time for you guys to go out and make a difference in the professions that you’ve chosen in the communities we serve. As you do so … be what you aspire to. Be better than we ever were. Be a leader not only for yourself but for us here at MTSU.”

New graduate Adkerson, a Tennessee Department of Education employee, took advantage of her free-class-per-semester benefit to cover her graduate education expenses. This spring, however, she paid for a second class in order to graduate with her daughter.

“It was worth it to me — financially and emotionally — to pay for a class,” said Adkerson, who’s a child care program evaluator working in Coffee, Bedford, Cannon, Franklin and Grundy counties and part of Rutherford County.

Adkerson said her late mother, Loyce Adkerson, was an inspiration to her; the older woman graduated from Belmont University at age 60 in 1993. Barbara Adkerson said she now plans to retire from the state and move into the human resources field.

Morton, who also is an MTSU undergrad alumna, is mother to Joanna Morton, 3, and Benaiah Morton, 2, and is expecting a third child in August. Amber Morton spent three semesters as a graduate assistant in the University Studies’ developmental reading program.

A PDF copy of the complete spring 2016 commencement program, which includes all the student graduates, is available here. You can see an album of photos from the event here.

A joyful Melissa Stugart, who’s earned her doctorate in literacy studies from MTSU, gives a thumbs-up to the camera as she and her classmates wait for the university’s first graduate student commencement to begin May 6. Stugart is director of teacher outreach in the Nashville offices of the Collaborative for Student Success. (MTSU photo by Andy Heidt)