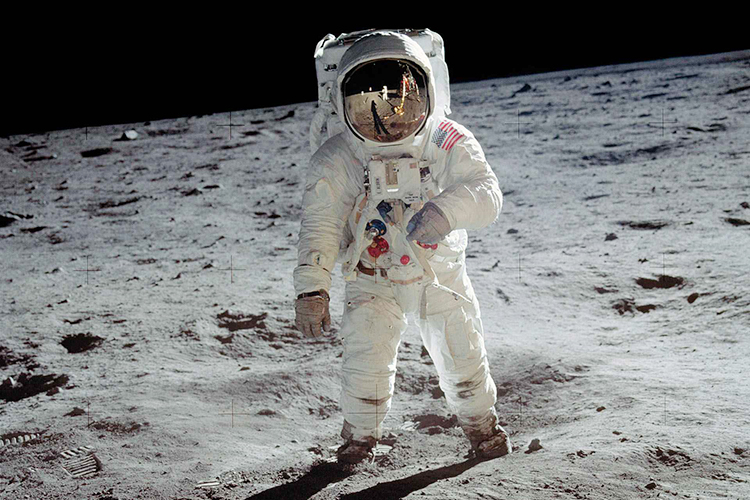 A return of moon rocks and soil and a discussion about the upcoming celebration of the 50th anniversary of the NASA Apollo 11 moon landing will highlight the MTSU Department of Physics and Astronomy Star Party set for 6:30 p.m. Friday, May 3.

Dr. Irina Perevalova will lead the event in Room 102 of Wiser-Patten Science Hall. 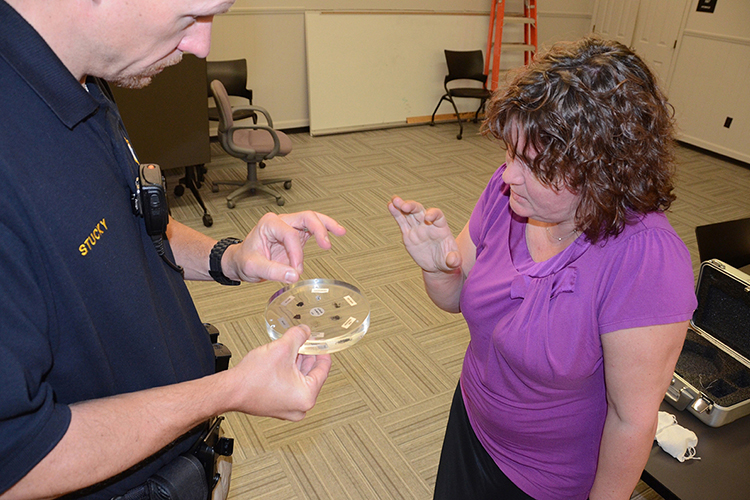 Former MTSU Police Lt. Broede Stucky, left, and Dr. Irina Perevalova of the Department of Physics and Astronomy discuss the moon rock samples he’s holding, which Perevalova obtained on loan from NASA in 2013, in this file photo. The moon rocks will return for the Friday, May 3, Star Party in Wiser-Patten Science Hall Room 102. (MTSU file photo by Randy Weiler)

First Friday Star Parties are a way for the department to bring the MTSU, Murfreesboro and surrounding communities together. There will be a lecture followed by telescope viewing outdoors, weather permitting. 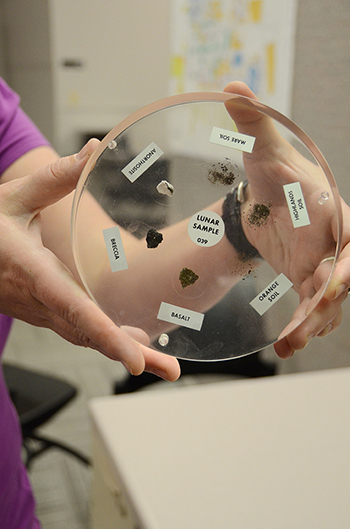 Dr. Irina Perevalova provides a close-up view of the lunar samples displayed on the MTSU campus in 2013 in this file photo. Lunar Sample #039 includes basalt; orange, highlands and mare soil; anorithosite and breccia. More NASA lunar samples will return to MTSU for the May 3 Star Party celebrating the 50th anniversary of the Apollo 11 moon landing. (MTSU file photo by MTSU News and Media Relations)

The event is free and open to the public, and families are always  welcome at MTSU’s Star Parties.

“We’ll try to make it interesting, have some activities for children and answer questions that people have,” said Perevalova, who first brought the special moon rocks collection to MTSU in 2013.

The moon rocks will remain at MTSU for a short time, she said.

The Department of Physics and Astronomy is one of 11 in MTSU’s College of Basic and Applied Sciences.

Astronaut Edwin E. “Buzz” Aldrin Jr., Apollo 11 lunar module pilot, is shown during the Apollo 11 moonwalk on July 20, 1969. Astronaut Neil A. Armstrong, commander, took this photograph with a 70mm lunar surface camera and is shown reflected in Aldrin’s helmet alongside the lunar module. The 50th anniversary of the moon landing is the topic for the May 3 Star Party at MTSU. (Photo by Neil Armstrong/NASA)