Professor Kevin McNulty on "An..

‘MTSU On the Record’ experienc.. 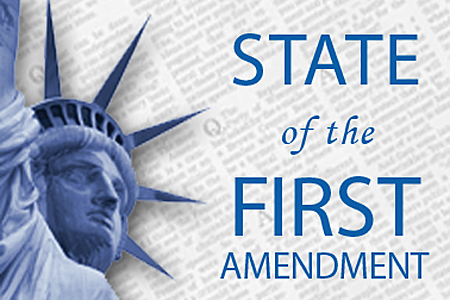 WASHINGTON — In a survey released July 16 by the Newseum Institute, 34 percent of Americans say the First Amendment goes too far in the rights it guarantees, up from 13 percent in last year’s survey. This is the largest single-year increase in the history of the State of the First Amendment national survey.

“It’s unsettling to see a third of Americans view the First Amendment as providing too much liberty,” said Paulson, who also is the dean of the College of Mass Communication at Middle Tennessee State University. “This underscores the need for more First Amendment education. If we truly understand the essential role of these freedoms in a democracy, we’re more likely to protect them,” Paulson said.

On other issues, the survey found:

“Americans remain generally supportive of First Amendment freedoms. But the inability of most to even name the freedoms, combined with the increase of those who think the freedoms go too far, shows how quickly that support can erode,” said Policinski. “As a nation, we must better prepare our fellow and future citizens for the hard decision of defending core freedoms against those who would damage or limit them by violence or by law.”

In this undated photo, visitors review newspaper front pages from around the world at the Newseum, which is located on Pennsylvania Avenue in Washington, D.C. (Photo courtesy of Sam Kittner/Newseum)