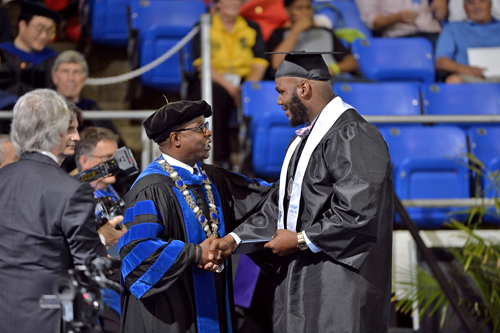 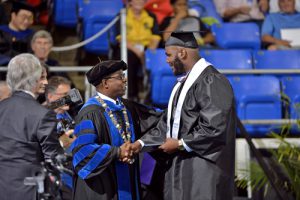 Middle Tennessee Blue Raider defensive tackle Jimmy Staten, right, shakes hands with MTSU President Sidney A. McPhee after receiving his bachelor’s degree Saturday — the same day Staten became the first Blue Raider to be drafted since 2011, as he was selected 172nd overall in the fifth round of the 2014 NFL Draft by the defending Super Bowl Champion Seattle Seahawks.

Staten learned of the Seahawks’ decision in the midst of his graduation ceremony on Saturday afternoon and was given a special acknowledgement by McPhee, at left, before later walking across the stage to receive his degree. Staten received the call about being drafted while awaiting to receive his degree in Liberal Studies.