MTSU grads urged to ‘double yo.. 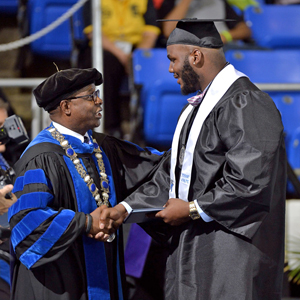 Middle Tennessee Blue Raider defensive tackle Jimmy Staten became the first MTSU player to be drafted since 2011, as he was selected 172nd overall in the fifth round of the 2014 NFL Draft by the defending Super Bowl Champion Seattle Seahawks.

“I’m just excited. This has been the best week for me ever,” he said Saturday evening. “My birthday was Sunday, and I graduated and got drafted today. … It’s been an awesome week.”

Staten learned of the Seahawks’ decision in the midst of his graduation ceremony on Saturday afternoon inside MTSU’s Murphy Center and was given a special acknowledgement by MTSU President Sidney A. McPhee and a rousing ovation from the crowd before he later walked across the stage to receive his degree.

A jubilant Staten, who received the call about being drafted while waiting to receive his degree in liberal studies, jumped up and pumped his fist in satisfaction as his fellow graduates cheered him on in Hale Arena.

Staten said he recalls someone speaking on stage, but he admitted being a bit distracted after learning that his dream of playing on Sundays was one step closer to becoming a reality.

“I was totally into my phone,” he said, adding that he understands getting drafted is just the beginning.

“It’s an honor, but I know it’s work from here,” he said. “I leave out (Sunday) and I know that I’ve gotta work hard and do what I know … and I believe I can make the team.

“A lot of people think just because you get drafted that you made it, but you have to make that 53-man roster and you also have to become a productive member of that team.”

The Waycross, Georgia, native was tabbed All-Conference USA Honorable Mention in 2013. He was also invited to the NFLPA Collegiate Bowl.

As a senior, Staten was voted a permanent team captain. He played in 12 games, starting in 11. He completed his senior year finishing with 30 tackles, 1.5 tackles-for-loss, a pass breakup and two hurries.

Staten only missed the MTSU season opener against Western Carolina due to injury. He posted 36 tackles in 12 games as a junior and finished his career with 49 career games played.

Staten is the 31st draft pick in school history, becoming the first since Rod Issac was selected by the Jacksonville Jaguars in the fifth round — 147th overall — in 2011.

He is the first Raider to be picked by Seattle since Tony Burse was a 12th round pick in 1987. Cornerback Marcus Udell was the last Raider to participate in a Seattle camp, participating there in 2010.

Staten will report to the Seahawks rookie camp in Seattle later this month.

Middle Tennessee Blue Raider defensive tackle Jimmy Staten, right, shakes hands with MTSU President Sidney A. McPhee after receiving his bachelor’s degree Saturday — the same day Staten became the first Blue Raider to be drafted since 2011. He was selected 172nd overall in the fifth round of the 2014 NFL Draft by the defending Super Bowl Champion Seattle Seahawks. (MTSU photo by Andy Heidt)