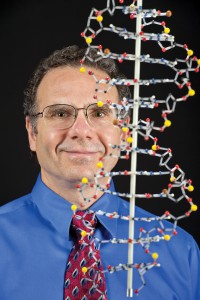 In science, home runs are the exception, not the rule. It’s the rare day in the lab that yields a life-changing vaccine or reveals a new element. (And even those “days” are themselves the result of the weeks, years, and even decades of work that preceded them.)

Instead, the potential advances of most research are incremental—helping scientists understand another step of a metabolic process, verifying something is not possible, or providing a crucial next step for a discovery that is itself still years away.

That doesn’t mean there aren’t home runs to hit—discoveries that yield practical, even revolutionary, real-world applications within years and even months of being made. And those are precisely the type of advances that appeal most to Dr. Elliot Altman, the head of MTSU’s newly established, interdisciplinary Molecular Biosciences Ph.D. program.

When Altman steps up to the plate, he’s aiming for the fences.

Altman’s laboratory is helping address one common misery of the human condition—arthritis. The key to tackling such a far-reaching problem? Keeping it short. And that’s where peptide therapeutics come in.

Peptides are short chains of amino acids. They are so short, in fact, that they often lack an epitope—a marker that helps the immune system distinguish between what belongs in the body and what is a foreign, potentially harmful invader. Whereas antibodies are large proteins that always contain epitopes—some of which may trigger negative immunogenic responses—most peptide therapies being pursued involve 20 amino acids or fewer,and thus lack an epitope. As such, they also neatly sidestep the host of immunogenic complications that plague antibody drugs.

Though a phrase like “peptide therapeutics” may draw blank stares from the average person, almost everyone knows someone benefiting from the science. Insulin, that mainstay of diabetes treatment, is one of more than 20 peptide drugs currently on the market. (Others include glucagon, calcitonin and oxytocin.)

Although peptide drugs have a substantial advantage over antibody-based drugs, they also carry a pretty significant drawback—they lack staying power.

“Insulin has a half-life on the order of minutes,” Altman says. “That’s why people who have diabetes who have to take insulin have to take it three times a day.”

The human body is very efficient at breaking down and recycling peptides. In fact, most peptides are completely broken down and removed from the bloodstream in a process that can take anywhere from a few minutes to a few hours. From a practical perspective, this means peptide-based medication must be taken much more frequently and in higher doses than traditional antibody drugs.

For Altman and his researchers to make any progress toward providing an attractive peptide-based therapy—be it for arthritis or any other affliction—they first needed either to find or build a hardier peptide.

That’s where E. coli comes in.

Though the general public associates Escherichia coli with food poisoning, for a molecular geneticist like Altman, this common bacterium of the human gut is an invaluable tool in peptide research—for, although the human body swiftly breaks down peptides, E. coli does it even faster.

“With a much faster metabolism than humans, E. coli replicates and divides in 20 minutes under optimal conditions,”

Altman says. “Unstable peptides are destroyed in seconds to minutes.”

But while its metabolism is faster in comparison, E. coli and humans are comparable in that each possesses a vast array of enzymes that degrade peptides.

“Thus, conventional wisdom suggests if you tried to produce a recombinant peptide in E. coli, you wouldn’t find it [it would be degraded too quickly],” Altman says.

After all, with a robust population of protein-devouring enzymes, how could any peptides survive? And why even bother checking? In a tribute to the value—and obstinacy—of the scientific method, Altman and his team did it anyway.

In this instance, scientific method trumped conventional wisdom, as some peptides showed surprising staying power—lasting days instead of minutes.

What helped a few peptides stay active and whole while their fellow peptides were being cleaved down to their individual amino acids?

“When we sequenced them, we found a telling answer,” Altman says. “These peptides had developed a protective motif that prevented degradation.” Since the initial discovery, Altman and his team have distinguished two separate motifs—or recurring structures—that yield hardier peptides.

“One protective motif has to do with multiple prolines at the end of the peptide,” Altman explains. “The other involves fusing the peptide to a small stable protein anchor.” Each motif serves as a shield for the peptide to which it is attached, which in turn has yielded dramatic results in terms of peptide half-lives.

“We’ve shown that we can increase the half-lives of these peptides, depending on what motif we use, anywhere from 2- to 100-fold.”

Big Pharma is no stranger to the potential of peptide therapeutics. (Nor is small pharma, for that matter.) A number of pharmaceutical companies have invested heavily in the technology, discovering hundreds of peptides that, alone in a test tube, do everything asked of them. These peptides seek out protein targets and block receptors—and in doing so promise effective treatment for everything from arthritis to a host of cancers. But then they are taken out of the test tube and that promise vanishes as quickly as the peptides themselves.

“In an animal model, they don’t work—they are degraded too quickly,” Altman says. The result? “Hundreds of peptides sitting on the shelves of pharmaceutical companies.”

But with the new protective motifs Altman and his team have discovered—and the 2-to-100-fold increase in peptide half-lives that come with the motifs—there is now good reason to return to the shelves and give these orphaned peptides a second look.

“We can take a failed peptide and make it a drug,” Altman says. Peptide Biosciences, headquartered in Thousand Oaks, Calif., was one of the first companies to seek to do just that.

In the case of Peptide Biosciences, the orphaned peptide in question is a potential game-changer in the fight to treat rheumatoid arthritis. In “immune compromised” diseases such as rheumatoid arthritis, the body attacks itself, causing an immune response that can lead to a corresponding cascade of ill effects—from inflamed and painful joints to potential skin and vision problems, not to mention the emotional and psychological effects of dealing with a chronic condition and the side effects of many of the drugs used to treat it. In fact, ask anyone who suffers from rheumatoid arthritis about the trials and travails of the condition, and they are likely to spend as much time bemoaning the different adverse side effects of treatment medications as they are the affliction itself.

Peptide Biosciences’ particular peptide, currently named NB406, addresses both sides of the treatment equation. First, NB406 disassociates one of the key parts of the initial cascade that leads to full-fledged rheumatoid arthritis, setting the clock back to zero. Then, as a card-carrying non-epitope-bearing treatment, the stabilized peptide passes unremarked by the body’s immune system. So far, so good—NB406 has outperformed Enbrel, one of the most widely used drugs on the market for rheumatoid arthritis in an animal model.

The Tip of the Peptide

As exciting as the development of NB406 might be for sufferers of rheumatoid arthritis, it’s just one of many potential peptide-based applications. There are plenty of orphaned peptides out there, after all, and the motifs discovered by Altman and his team could turn any one of them into an effective treatment for any of a host of other ailments. Altman is particularly interested in the use of peptide antibiotics to battle bacterial infections—autoimmune diseases, such as atherosclerosis, but also of the effort to battle bacterial infections—particularly Methicillin-resistant Staphylococcus aureus, better known as MRSA, a virulent superbug that’s the bane of many ofa hospital wing.

“Pathogens will always develop resistances,” Altman says. “With peptides, we can develop hundreds of antibiotics and stay well ahead of the curve.”

Thanks to Altman’s research, NB406 is likely just the first of many new drugs to have its home-run potential unleashed. Batter up.