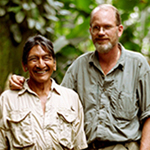 Sponsored by the Distinguished Lecture Fund, Saint’s talk  was held in the Keathley University Center Theater.

Saint, who also is an inventor and engineer, was born to missionary parents in Ecuador in 1951. The native Waodani Indians killed Saint’s father, Nate, and four other people in 1956, and Steve Saint has spent much of his adult life serving indigenous people in Africa and Central and South America.

“He has a compelling personal and professional story to tell and to share with the MTSU and Murfreesboro communities,” said Joe Cooper, an MTSU aerospace graduate student who helped coordinate Saint’s campus visit along with Assistant Professor Nate Callender.

“The story of forgiveness and redemption has been told in his book, Through the Gates of Splendor, and in the 2005 movie End of the Spear,” Cooper added.

Saint and Mincaye Enquedi, who was part of the 1956 attack and is believed to have speared Nate Saint and fellow missionary Ed McCully during the fracas, have since become close. Enquedi, who now practices Christianity, adopted Steve Saint as his tribal son.

In 1996, Saint established I-TEC, or the Indigenous Technology Education Center, based in Dunnellon, Fla., to develop, produce and distribute unique tools and training for native peoples in frontier areas. The special tools are branded I-See for vision care, I-Dent for dental work, I-Med for health care, I-Fix for technology training and I-Fly, which features Maverick, a “flying car”/powered parachute for frontier transportation.

To learn more about I-TEC and Saint, visit www.itecusa.org.