Preparing to Land the Perfect ..

In the News: Local, national p.. 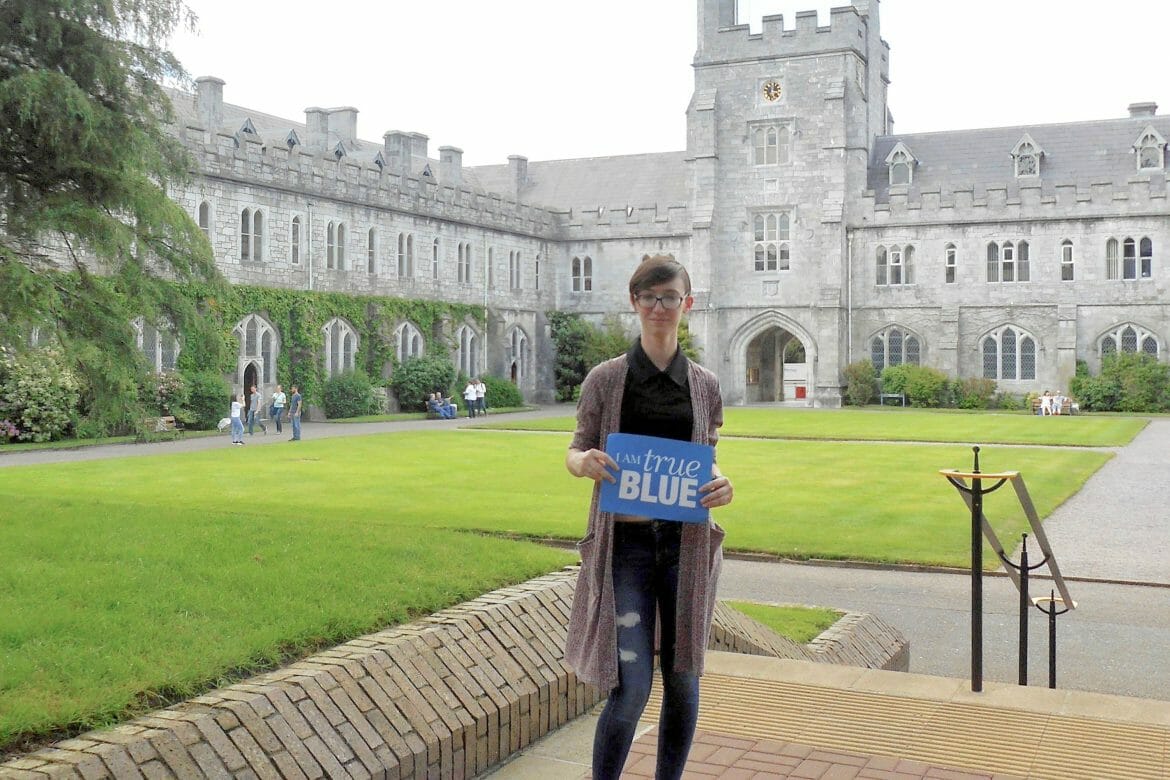 While an ideal summer for most consists of going to the beach or chowing down at family cookouts, the extended break from school grants you the opportunity to go on some pretty rad adventures. Study abroad trips, valuable internships, and volunteer experiences filled the vacation calendar of a lot of MTSU students, but summer has wrapped up (sorry, somebody needed to give you a reality check) and it’s time to sit down and learn about the summer experience of a few Blue Raiders.

Hunter Wolkonowski: Opening for Kane Brown, Florida Georgia Line, and a Crowd of 30,000

While most of us sing in the shower with a crowd of only ourselves, Hunter “HunterGirl” Wolkonowski, a junior Recording Industry major, played a crowd of over 30,000 at the Country Stampede festival in Manhattan, Kansas. She earned this honor by participating in the Nashville Songwriters Association International (NSAI) Songwriting Contest, a competition judged by industry officials and an online vote.

“I submitted my new single, ‘Falling Out of Loving You,’ and prayed for the best,” she said. Evidently her prayers were answered, as the next thing she knew, she was getting a phone call she’d never forget. “It was absolutely surreal to get the call that I’d be opening for Kane Brown and Florida Georgia Line at Country Stampede!” Hunter was able to perform the song she won the competition with on the Cenex Main Stage with a couple of her friends.

That wasn’t the only highlight of Hunter’s summer, though. A month later, she performed at an event with Operation Song here at MTSU. She’s worked with the group since her freshman year, citing her love for helping veterans and songwriting.

She did admit to being a little starstruck at the event after meeting country music icon Charlie Daniels, the namesake of the MTSU Charlie and Hazel Daniels Veterans and Military Family Center. “He was so nice and down to earth! It was unbelievable getting to meet someone I had looked up to and jammed out to his songs on the radio as a little girl.”

Although songwriting is something she took up at a young age, she still credits MTSU as a large part of her success. “MTSU has played a large role in my life. The professors here push you to be your very best and work as hard as you possibly can to reach your dreams.” She even had a shoutout to one of her professors, Dr. Kristine McCusker. “Kristine McCusker is one of my favorite professors I have ever had. She has attended some of my shows, been a huge supporter, and introduced me to so many amazing people.”

As she prepares for the new school year, she is also working on a new CD to be released around October. Be on the lookout for it at huntergirlsmusic.com!

MTSU student Angele Latham looking over the water from a cliff during her Study Abroad trip to Ireland.

What happens when you find yourself at an Irish pub (a real one, not the one down the street that’s packed on St. Patrick’s Day) in the middle of the night, and you try to find a spot in the tiny establishment? They make room for you, hand you instruments, and cheer for you, of course!

Angele Latham, a sophomore Visual Communications student, learned a ton about Irish language and culture while studying abroad in Cork, Ireland through the USAC Program. After meeting up with other students from around the United States in Dublin, they journeyed the Wild Atlantic Coast, which runs alongside the coast of southwest Ireland. After around a week, they finally arrived in Cork, “which is a beautiful port city that boasts the recent ranking of the 3rd friendliest city in the world. And if you even spent one minute there, you would agree.”

The biggest feature of the trip that grabbed Angele’s attention was the historical value of the old town. “It’s filled with so much history: ancient castles just appear on the horizon, old tall ships creak in the harbor, sword marks appear on random stones, and tiny little shops (that need no name because of their age) jut out of modern buildings along the twisty streets that make Cork.”

Oh, and that whole pub scenario? Let Angele describe it herself:

“One night, we stumbled upon a tiny little pub called the High B Bar. It was so small and so well known that there wasn’t even a sign. You had to know it was there and get there early, because it held about 30 people at most. So, we poked our heads in to see the live music, and mind you, no one there knew us, obviously, or had ever met us. But as we stepped in, the music paused, and they all turned to look at us expectantly. In a panic, we all just waved and said hello (our accents, apparently, had given us away), and they broke into cheers. Not just a friendly little exclamation, they were raising their glasses and yelling for us. One woman in the back even shouted ‘Oi, it’s the Americans!’ and the cheering continued. The offered us seats, handed us instruments, and we joined their little céilí session like we were long-lost family members. It was amazing, and something I’ll never forget.”

I can’t speak for you all, but if I spent weeks of my summer in Ireland, coming back would be a colossal disappointment. Angele, however, is still searching for excitement here in Murfreesboro: “I’m really excited for the coming school year, actually! I have a lot of journalism and criminal justice classes lined up, and recently joined the staff at Sidelines, so my reporting life is about to be very busy. I always look forward to a challenge, though, and I genuinely love journalism, so I’m excited to see where these opportunities take me.”

Entering her first summer break of college, sophomore Biology major Emily Oppmann knew it would be tough to find significant biology-related research opportunities for someone her age. However, after forming a connection with her genetics professor, Dr. Ashley Morris, she was offered a summer spot in her lab studying the genetic variations in Sweet Gum trees.

“My part of the project involved extracting DNA, using primers to amplify the target regions we were interested in studying, and then analyzing the results to see how closely related one tree was to another.”

Even though she wasn’t paid and had a ton of work to do, she made the most of it and gained valuable experience that she’ll hold onto throughout her career.

“I came to the lab almost every day over the summer! I wasn’t doing it alone, so there was thankfully a social aspect to it as well. I collaborated with the other people involved in the project to interpret the data and make a research plan. Although I didn’t get paid, I was able to learn how to use some really cool lab equipment and keep an organized journal. It got a little tedious, but I had fun knowing I was making a worthwhile contribution to a big project.”

While she didn’t exactly take a break from campus, she’s excited to get back to class and present what she’s found before looking for new research opportunities. “I am ready for school to get started! The experience I’ve gained over the past couple months has been invaluable and makes what I’m learning throughout the school year so much more real. Outside of my work in the lab and classrooms, I’ll be continuing my involvement with the Student Government Association and Blue Elite.”

Cast members of Titanic: The Musical at the Arts Center of Cannon County who have attended or worked for MTSU.

What do you get when you throw 7 current MTSU students (including myself!), 6 alumni, and 3 current members of our faculty and staff on a stage in Woodbury, TN? A sunken ship, an abundance of 1912-style costumes, and thunderous applause, of course!

This past summer, the Arts Center of Cannon County put on a production of Titanic: The Musical that featured heavy involvement from the MTSU community. From dual enrolled students to staff and recent graduates, there was definitely a True Blue mark left on the production. And it showed.

Drawing critical acclaim from BroadwayWorld Nashville, the show ran from August 10th until the 25th, selling out nearly every show. Don’t be fooled, though: this wasn’t a musical version of the James Cameron film. Instead, the show (which won Best Musical at the 1997 Tony Awards) focuses on several stories that actually happened aboard the RMS Titanic during that fateful maiden voyage. From stories of elopement and love, to the flaunting of wealth and status, it was a show with many moving parts that came together to tell the story of the quintessential disaster of the 20th century.

Nicholas True, a junior Music Industry major in our School of Music, served as Assistant Music Director for the show. For him, the entire process was made easier by the people he worked with every day. “The experience from learning the music to performing with the cast was absolutely fantastic. I could not think of better people to help share this amazingly heart touching story with.”

You may even see some of the cast members from this show in MTSU’s own theatrical productions this year. In November, the MTSU theatre department is putting on Dolly Parton’s 9 to 5: The Musical, and in April there will be a production of Spring Awakening. Be sure to check them out!

Looking to find awesome experiences to take part in next summer? Make sure you check out our Study Abroad opportunities as well as Lightning CareerLink for internships currently being advertised specifically for MTSU students. Have a great semester!