After a workday of trying to find a lost kid, negotiating a road-rage-fueled feud between drivers involved in a fender-bender, pursuing speeders, and handling a domestic violence dispute, how would you unwind and relax? 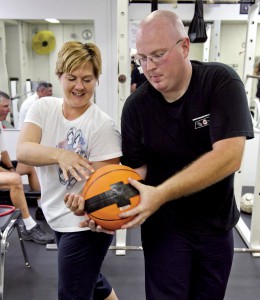 Drs. Mark Anshel and Dana Umscheid of the Department of Health and Human Performance wanted to find out if a coping skills program, implemented in combination with a 10-week wellness program, would help officers and dispatchers at the Murfreesboro Police Department deal better with the unique pressures of their jobs.

“One of the things I learned in working with law enforcement and with emergency dispatchers, as well, is they do not have very good recovery strategies,” Anshel says.

Participants, including Chief Glenn Chrisman, were divided into three groups for the study, which was conducted over the spring and summer of 2010.

The upshot of the study is that the second group made more progress.

“Our officers are some of the most well-trained in the Southeast,” Chrisman says; however, he notes, “This project illuminated the need for more stress management and physical agility training.”

It was important to Anshel and Umscheid that dispatchers were included in the study. Anshel characterizes them as “unsung heroes in our community” for handling calls that range from tragic emergencies to frustrating inanities.

Umscheid observed that the dispatchers’ jobs are so sedentary that they must get up and take advantage of exercise opportunities even when they’d rather not do so. Now dispatchers are taking the stairs to the fitness room and working out with weights or on a treadmill during 10–15 minute breaks.

Another frustration faced by dispatchers and officers alike is the lack of opportunity to talk about their stress levels.

“Most of us have friends and family we can vent to when our job is frustrating,” Umscheid says. “In many ways, our colleagues are the only ones who understand what the job is like, day in and day out.”

Anshel and Umscheid’s research was presented at the annual convention of the American Psychological Association in August, but the scholars found the opportunity to give back to the community and the men and women who protect it even more rewarding than the academic kudos.

“We hope this study will help bring light to the need for police stress management training, resulting in a healthy police force nationwide,” Chrisman says.