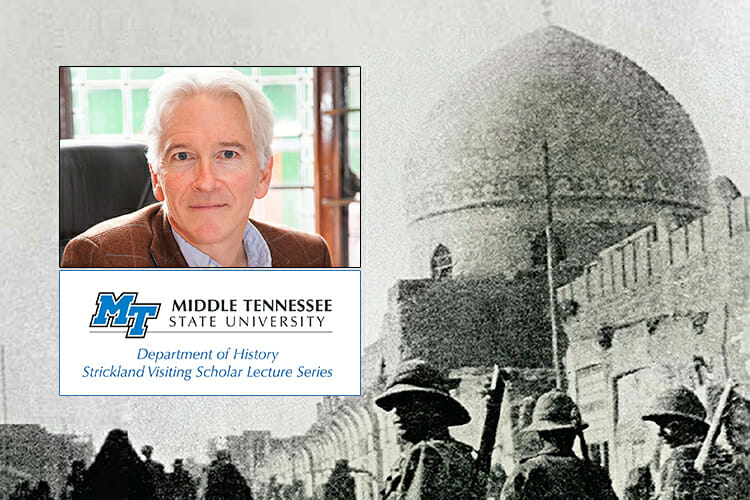 An acclaimed American historian teaching at the University of Oxford, with a thorough knowledge of the Middle East from the 14th century to the present day, will visit MTSU Thursday, Nov. 15, to present this fall’s free Strickland Visiting Scholar Lecture.

Dr. Eugene Rogan will speak on “World War I and the Making of the Modern Middle East” Nov. 15 at 6:30 p.m. in the James Union Building’s Tennessee Room on the MTSU campus.

A 5:30 p.m. reception in the JUB lobby will precede Rogan’s talk, and a book-signing opportunity with the author will follow the lecture.

MTSU’s Department of History, the Strickland Lecture series sponsor, is encouraging visitors to park in the Ingram Lot across Middle Tennessee Boulevard from the James Union Building and use a guest shuttle to avoid the area’s construction hazards. The shuttle will run from 5 to 6:30 p.m. and again after the lecture until 8:30 p.m.

The professor taught at Boston College and Sarah Lawrence College before joining the St. Antony’s faculty in 1991. In 2017, he was elected a Fellow of the British Academy, which is the United Kingdom’s national academy for the humanities and social sciences.

The Economist and the Wall Street Journal named Rogan’s recent book, “The Fall of the Ottomans: The Great War in the Middle East,” one of the best of 2015. The work also received the British Army Military Book of The Year award in 2016, and the Indonesian translation received the Islamic Book Award in the 2017 Jakarta Islamic Book Fair.

Rogan is also the author of “The Arabs: A History,” named one of the best books of 2009 by The Economist, Financial Times, and The Atlantic Monthly. His works have been translated into 17 languages.

For more information about this Strickland Visiting Scholar Lecture, please contact MTSU’s Department of History at 615-898-5798 or visit www.mtsu.edu/history.