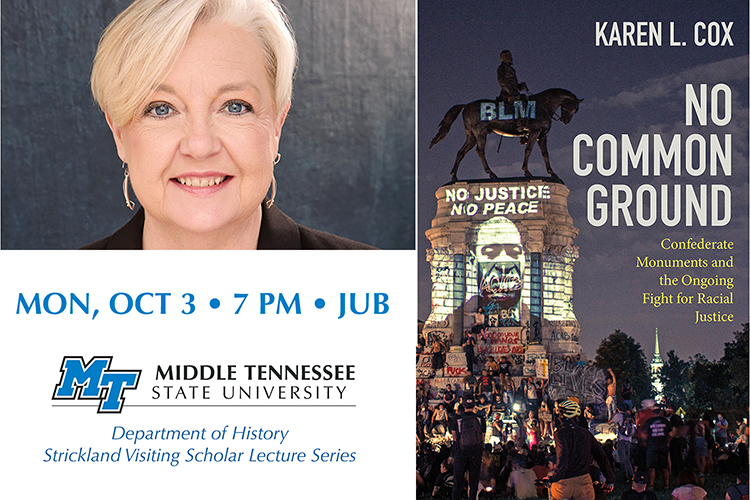 An expert on Southern history and culture will delve into Confederate monuments’ legacy of white supremacy when she talks with a Middle Tennessee State University audience on Monday, Oct. 3, at this fall’s Strickland Visiting Scholar Lecture.

Karen L. Cox, a professor of history at the University of North Carolina at Charlotte, will speak on “No Common Ground: Confederate Monuments and the Ongoing Fight for Racial Justice” at MTSU’s James Union Building at 7 p.m. Central Oct. 3.

Cox’s free public talk will be followed by a question-and-answer session and a book-signing opportunity.

The lecture is set for the Tennessee Room inside the JUB, located at 516 Alma Mater Drive just off Middle Tennessee Boulevard. A campus map is available at https://bit.ly/MTSUParking.

Guests should park in the Ingram Lot, across MT Boulevard from the President’s House, and ride a free shuttle to the event from 5:30 to 7 p.m. Return rides will be available after the lecture until 9:30 p.m.

Guests with disabilities can use the accessible entrance at the back of the JUB and take the elevator to the second-floor Tennessee Room.

The talk also will be livestreamed via Zoom beginning at 7 p m Central. Access is free and available at https://bit.ly/MTStricklandLectureOct2022Livestream.

Cox, who also is founding director of the UNC graduate public history program, published her fourth book, “No Common Ground: Confederate Monuments and the Ongoing Fight for Racial Justice,” in 2021 to trace the history of the controversial shrines and why white men and women erected them to mark their “Lost Cause” mythology and what they saw as their continuing supremacy.

In her Oct. 3 lecture, Cox will discuss how the memorials began cropping up shortly after the Civil War — the first at a public courthouse was in Bolivar, Tennessee, in 1867 — and escalated near the 50th anniversary of the conflict as the builders used the markers to support their Jim Crow legislation.

The civil rights movement in the 1960s, and the war’s centennial, saw another wave of Confederate memorials erected across the South as white supremacists sought to intimidate their Black fellow citizens.

Anti-monument sentiment grew over the next decades as Black Americans took their rightful places as business and community leaders and won elected offices.

Monument proponents fought back with gerrymandered elections and “heritage commissions” that banned renaming or removing Confederate-themed tributes. The “Black Lives Matter” movement’s emergence in 2013 helped convince growing numbers of Americans to call for the removal of Confederate monuments.

For more information about this lecture, please contact MTSU’s Department of History at 615-898-5798 or visit www.mtsu.edu/history/strickland-scholar.php.