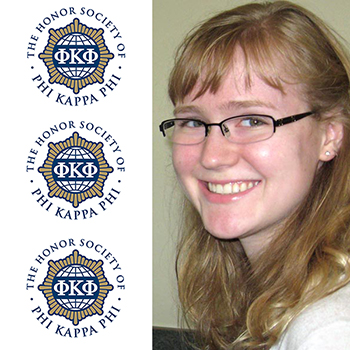 One bright MTSU graduate’s pathway to the stars is being paved with a major monetary boost.

Katelyn Stringer, who graduated from MTSU in May 2015 with a bachelor’s degree in physics, will use her $5,000 fellowship from the Phi Kappa Phi honor society to help finance her graduate degrees in astronomy at Texas A&M University.

“I was not expecting it at all,” Stringer said of her stipend. “It was such a nice surprise.”

Stringer’s academic excellence in high school resulted in a Buchanan Scholarship, which paid for her entire baccalaureate education at MTSU.

“We all know that college is expensive and I’ve been very fortunate … to have the Buchanan Fellowship,” said Stringer, “but I also really don’t have anything left over. So it’ll be really nice to have a … start on making a safety net for the future.”

Included in that economic “safety net” is a three-year diversity fellowship from Texas A&M, which Stringer said she will supplement with part-time teaching work and research grants.

Although she won’t become an official student at A&M until September, she began research July 6 to get a head start on the work to come.

The Lake Charles, Louisiana, native, who grew up in Smyrna, Tennessee, will study the properties of very old stars from a galaxy that was sucked into the Milky Way by gravity.

Last summer, on a visit to A&M’s McDonald Observatory, Stringer was allowed to climb inside a telescope while workers were installing a new secondary mirror.

“I put on these little goofy bootie-looking things over my shoes, and I climbed inside a 107-inch diameter telescope,” she said.

Ironically, Stringer admits to being “lost in space” when she first arrived at MTSU.

“I wouldn’t say that I was aimless, but I really didn’t have a concrete direction,” she said.

“The more I learned, the more I grew to love it,” Stringer said.

She loved it so much that she served as president of the MTSU Astronomy Club from 2013 to 2015.

Stringer also credits Laura Clippard, a coordinator in the University Honors College, with helping her craft the application that convinced Phi Kappa Phi to award her the fellowship.

Phi Kappa Phi was founded in 1897 at the University of Maine to acknowledge and honor excellence in all academic disciplines. Its motto is “Philosophia Krateito Photon,” which is Greek for “let the love of learning rule humanity.”

“Having a committee of successful people look at my application and say, ‘Yes, we think she has potential,’ that’s an awesome pat on the back,” Stringer said.