MTSU names co-directors of Off..

Telling the story of a century’s worth of broadcasting in America and in Tennessee has turned a national spotlight — and a pair of prestigious awards — toward a team of nine Middle Tennessee State University multimedia journalism students and alumni.

The students, all part of the School of Journalism and Strategic Media in the College of Media and Entertainment, first received a top-10 win May 21 in the national Hearst Journalism Awards Program for their November 2020 TV news special, “100 Years of Broadcasting.” 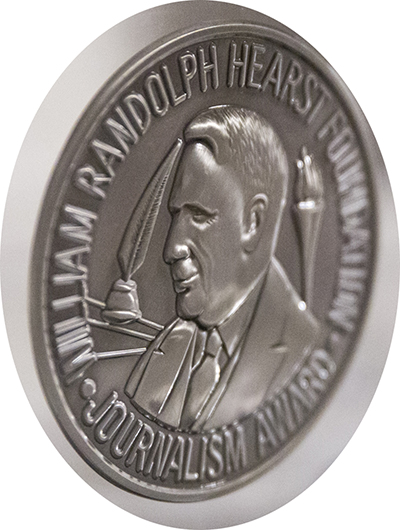 Then, on May 25, they learned their 30-minute special and its associated website made them one of six student-category Silver Winners in the renowned Telly Awards, which recognize the best TV and video content created worldwide by advertising agencies, TV stations, production companies and publishers.

The Hearst awards, called “the Pulitzer Prizes of collegiate journalism,” are considered the top honors for journalists at accredited U.S. universities.

This year’s Tellys included winning creations from organizations ranging from The Walt Disney Company and the PBS NewsHour Student Reporting Labs to CBS Interactive and the Smithsonian National Museum of African American History and Culture.

The award-winning MTSU student special and its accompanying website are available at www.middletennesseenews.net/100-years-of-broadcast. You also can watch the entire program above.

“I am so proud of my students for earning these prestigious awards,” Eschenfelder said. “They put a great deal of work into the website and the television special. All of them spent many hours in and out of class gathering footage, interviews and archival materials as well as creating interactive elements and working on the website layout and content. Some of the students traveled outside of Murfreesboro to get content.

“We took every COVID-19 safety precaution to protect ourselves and others. The students conducted several interviews over Zoom, and they were wonderful! I loved the enthusiasm, creativity and care they displayed throughout the entire process. I also enjoyed watching them joyfully work as a team in the classroom and in the field. It was a great experience for us all.” 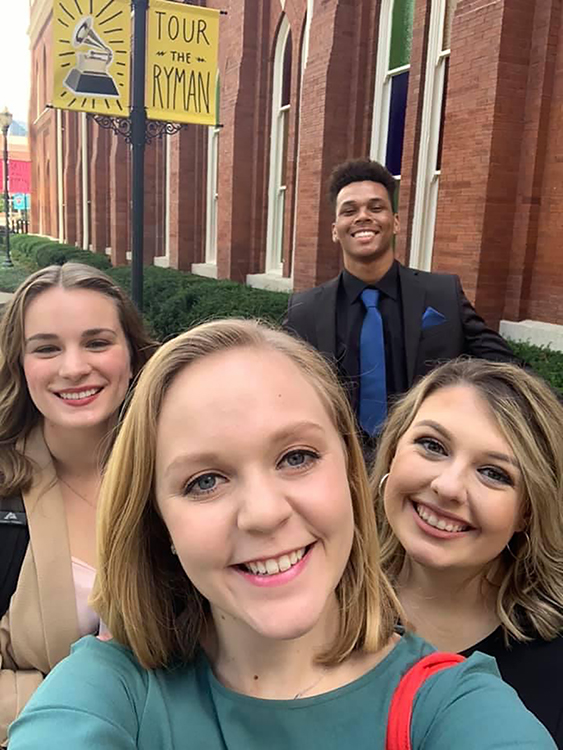 “100 Years” includes background on the first commercial radio broadcast on Nov. 2, 1920, from KDKA in Pittsburgh, Pennsylvania, and explains the history, diversity and impact of broadcasting in Tennessee with the help of in-person and virtual interviews with a wealth of experts.

• The Grand Ole Opry’s head archivist, Jen Larson, and WSM Radio engineer Jason Cooper discussing the station’s history from its crackling 1925 start and 1927 partnership with the Opry to its survival through the Depression, World War II, the 2010 Nashville flood and COVID-19.

The students incorporated archival footage with standups around campus as well as at Nashville locations. Those include the Ryman Auditorium, the Fisk campus and several downtown neighborhoods, reflecting the diversity of Tennessee broadcasting and its audience and linking the first 1920 election-day broadcast to their special, which aired the day before the 2020 presidential election. 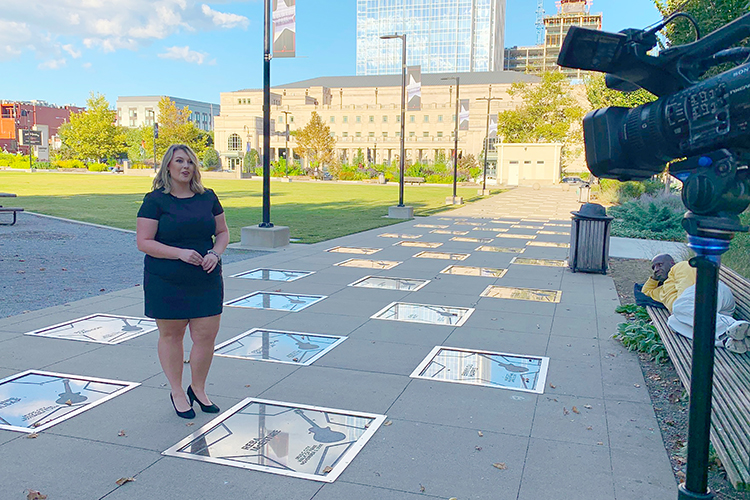 MTSU journalism student Christyn Allen of Oneida, Tennessee, records her introduction to a national award-winning 30-minute TV and web special, “100 Years of Broadcasting,” last October at the Music City Walk of Fame in downtown Nashville as a curious spectator listens on a nearby bench. Allen, who graduated last December, was part of the nine-member MTSU School of Journalism and Strategic Media student team that created the project on the history of broadcasting in America with a Tennessee focus. (photo submitted)

If all the award news wasn’t enough, Gonzalez, who produced the student special, also learned May 21 that she’s a recipient of this summer’s 12-week paid Fred Young Hearst Television Producing Fellowship and will be working in Louisville, Kentucky.

If her fellowship’s a success, she’ll be offered a full-time news producing job with a Hearst station.

“To say I am a happy camper right now would be an understatement — I’ve been doing my happy dance all morning!” Gonzalez said. “I am so incredibly excited for the opportunity to be a 2021 Hearst Fellow!

“Words cannot describe just how thankful I am for my professors and mentors in the School of Journalism and Strategic Media for helping me get here. Without professors like Dr. Christine Eschenfelder, (journalist-in-residence and Middle Tennessee News news director) Dan Eschenfelder and (journalism professor) Dr. Keonte Coleman, this would not have been possible, and I am so grateful for them!”

Coleman, who teaches digital media skills and video journalism courses plus the senior-level “Race, Gender and Class in Media” class, said Gonzalez “absolutely earned her spot” in the fellowship class.

“Morgan really impressed me with her preparation leading up to the Middle Tennessee News ‘Vote 2020’ election night live coverage and with her calm demeanor during the night of the newscast. She has what it takes to be a news producer ….

“I worked for Hearst Television as a news producer before I began teaching journalism. Morgan is going to a company that values nurturing its newsroom leaders, and it will give her every opportunity to succeed and move up within the company.”

2021 marks the third consecutive year of Hearst recognition of MTSU students’ work and continues a pattern of MTSU representation in the program.

Alumna Inman, who graduated in 2018 and now works at WBIR Channel 10 News in Knoxville, was a top-10 finalist in the 2017 Hearst TV news awards. Her fellow 2018 grad, Sarah Grace Taylor, was in the top 10 of the 2017 Hearst breaking news contest and now covers government for the Chattanooga Times Free Press.

The Telly Awards, established in 1979, are judged by a council of video and television experts from top companies in entertainment, publishing, advertising and emerging technology, such as WarnerMedia, NBC News, Framestore NY and Vimeo. This year’s competition saw a 15% increase in entries, which the organization said was driven by a significant rise in remote and virtual productions and many brands’ first-time use of animation.

Eschenfelder’s class also swept state and regional awards last year with their 20-minute special report, “Never Forgotten: The 75th Anniversary of D-Day.” The students and professor traveled to Europe in 2019 to retrace the steps of Allied soldiers who landed at Normandy, France, on June 6, 1944, to begin liberating Western Europe.

The students interviewed American and British WWII veterans, active-duty and retired military members during their study-abroad class, plus local youngsters back at home, for the story, which judges for one contest called “a multimedia masterpiece.”

For more information about MTSU’s School of Journalism and Strategic Media in the College of Media and Entertainment, visit www.mtsu.edu/journalism. 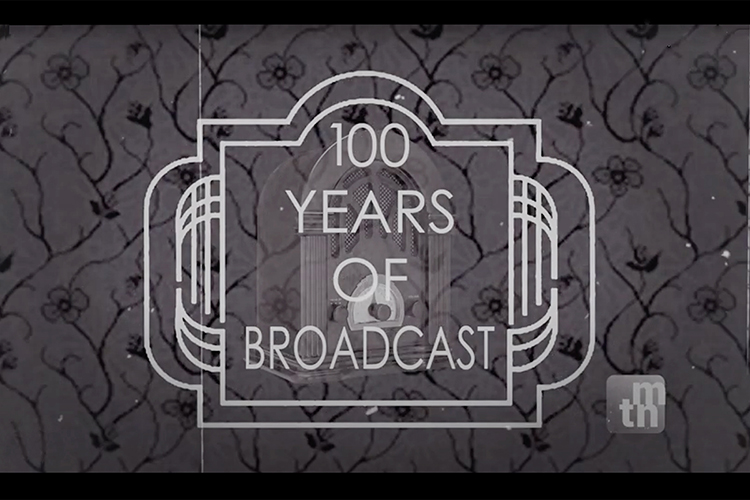 Art Deco-era text helps create the title screen for a national award-winning 30-minute TV and web special, “100 Years of Broadcasting,” by a nine-member MTSU School of Journalism and Strategic Media student team. Click on the image to watch the special. (photo submitted)