MTSU Board of Trustees OKs 2 n.. 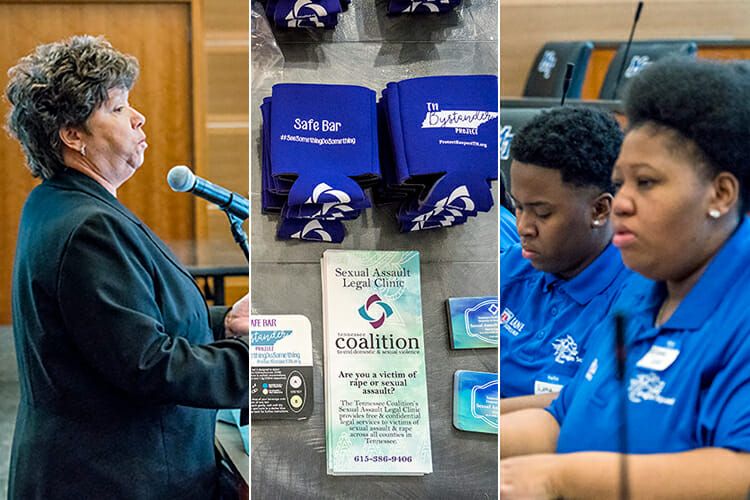 A new program at MTSU is taking aim at bystanders’ tendency to want to stay uninvolved in potential sexual assaults.

Activists explained the “Safe Bar” initiative March 22 during the Middle Tennessee Campus Safety Summit, held in the university’s Student Union. The program is modeled after a Washington, D.C.-based effort to show employees at bars and restaurants how to intervene if they suspect a customer or customers are in a potentially dangerous situation.

Sharon Travis, an outreach and advocacy specialist with the Nashville Sexual Assault Center, told participants it’s important to help those employees realize that the program can help their company’s bottom line as well as the larger community.

“We’re not demonizing alcohol,” Travis said. “We’re demonizing people who use alcohol to take advantage of another person.”

Items promoting personal safety are shown awaiting distribution at the 2018 MTSU Safety Summit March 22. The second and third items on the bottom row are coasters that can be used to test for the presence of drugs in a bar patron’s drink. (MTSU photo by J. Intintoli)

Because bar and restaurant workers have variable working hours, the center has placed an online training module on its website at www.besafeatlast.com/safe-bar.aspx. Amy Dean, sexual assault liaison in the University Police Department, and Barbara Scales, director of the June Anderson Center for Women and Nontraditional Students, have taken the training.

“Where we want to put our energy is in getting our college students involved in helping to train these places that they frequent, not only with asking them to be trained but being part of the training process,” Travis said.

Volunteer Chris Kepler, a Nashville bartender with master’s degrees in theological studies and gender and sexuality studies from Vanderbilt University, is pitching the program to Nashville businesses. “I saw that there was a lot of trauma at the intersection of sexuality and religious and ethical beliefs in society,” Kepler said.

Bar protection coasters, which enable drinkers to test their drinks for so-called “date rape drugs,” were distributed to summit participants.

Dean announced that MTSU also has received a $300,000 grant from the U.S. Office on Violence Against Women, a division of the U.S. Department of Justice, to help promote sexual assault awareness among underserved campus populations, including international and nontraditional students.

“We are in the process of advertising for a coordinator … for the next three years to monitor that grant under Barbara Scales’ guidance,” Dean said.

Lane College of Jackson, Tennessee, sent representatives of its “Dragon Squad” to the gathering. The “Dragon Squad” is a group of students who alert campus police and security personnel of any incidents or potential incidents.

“I’m always encouraged to see that there are resources out there that are trying to get ahead of the game, that are trying to do the preventive-type measures, because we see in law enforcement that prevention, in a lot of situations, does work,” Murfreesboro Police Chief Michael Bowen said.

“This is the type of thing that can do such good for so many people,” MTSU Police Chief Buddy Peaster added. “It can help all of us in this room and all of the people that we know and care about, and those even that we don’t, but that we serve.”

Experts will come together at MTSU Thursday, March 22, to pool their knowledge about ensuring safety on and around university campuses.

A campus parking map is available at http://tinyurl.com/MTSUParkingMap. Off-campus visitors attending the summit should obtain a special one-day permit from MTSU’s Office of Parking and Transportation at www.mtsu.edu/parking/visit.php.

Amy Dean, MTSU’s sexual assault intervention liaison in the University Police Department, said the summit “is an opportunity to bring area universities together … and come up with a best practice model for implementing the education and techniques from the Safe Bar Initiative in Washington, D.C., to make our area bars and restaurants safer for our students and community.”

Two Washington-based nonprofit organizations, Collective Action for Safe Spaces and Defend Yourself, introduced the Safe Bar Initiative in 2016. Its purpose is to train bar and restaurant staff “to recognize and respond to sexual harassment among staff and patrons,” according to the Collective Action website, www.collectiveactiondc.org.

This National Women’s History Month event is free and open to the public. It is co-sponsored by the Sexual Assault Center of Nashville, the Tennessee Coalition against Domestic and Sexual Violence and the MTSU STOP Grant, which is the stipend that funds Dean’s position.