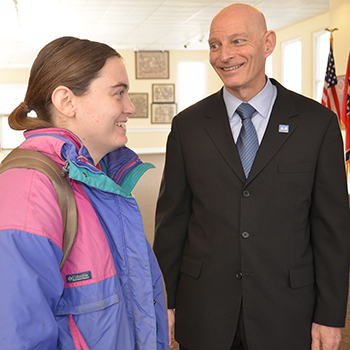 Keith M. Huber wanted to hear questions, concerns and constructive dialogue related to the MTSU student veterans and life for them on campus.

The one-hour, 15-minute conversation marked the first day of the two-day military-type “roll call” meeting, held in Cantrell Hall of the Tom H. Jackson Building. Huber wanted to meet the student veterans and begin to assess their needs.

Day 2 of the roll call sessions will be held from 11:20 a.m. to 12:45 p.m. Tuesday, March 3, also in Cantrell Hall. All student veterans and their family members are welcome to attend. To find the building location, a printable campus map is available at http://tinyurl.com/MTSUParking14-15.

Huber is hopeful word will spread and many more of the estimated 1,000 student veterans on campus, including their dependents, will bring their questions and concerns.

“What I need to hear from you are your experiences at MTSU,” Huber told the group. “… I’m here for you. This university cares about you.”

The three-star general, who retired as a lieutenant general in the U.S. Army after a 38-year career, said he had Ray Howell, coordinator in the MTSU Veterans Affairs office, send a nine-question survey to nearly 1,000 student veterans.

As of Monday’s roll call, almost 100 had responded and more responses are expected.

“Every veteran you come across, carry that message — ‘MTSU cares about you’ — to them,” Huber said. “I want them to share with me what concerns they have.”

MTSU junior accounting major Christopher Jeffery of Nashville said he would like to see a building like Tom Jackson, which is adjacent to the Veterans Memorial, “become dedicated space.”

“Part of my task is to improve the Veterans Center,” Huber said. He and Bartel explained how “we’ve got to get a better facility” while praising the efforts of Howell, who handles the veterans’ paperwork, and Heather Conrad, who directs the VetSuccess on Campus program. Both Howell and Conrad manage with small office space in Keathley University Center.

“I agree with the statement about space on campus,” Bartel said, noting he has the same concern for graduate and international students.

Graduate student Ryan DeBooy, 29, who is studying information systems while the Army pays for his education, requested Huber and the university do something to improve streamlining forms and student access to Huber.

Freshman plant and soil science major Crystal Richardson, 28, of Fayetteville, Tennessee, said it was “not only good to meet him (Huber), but also to get to meet other veterans who are here. I’m still trying to learn what’s available.

Huber first told the group he wasn’t on Twitter of Facebook and doesn’t send text messages. However, he later told them he “is receptive to change my personal habits. … I will change if that’s the way I need to communicate with veterans.”

He told them he could be reached by email at Keith.Huber@mtsu.edu and available in person in Room 111 in Cope Administration Building.

The group learned from Bartel that university President Sidney A. McPhee has approved a software package for text-messaging bursts specifically for veterans.

Huber and Hilary Miller, a member of the university’s Veterans and Military Affairs Committee, plan to visit Arizona State University and its Pat Tillman Veterans Center in several weeks.