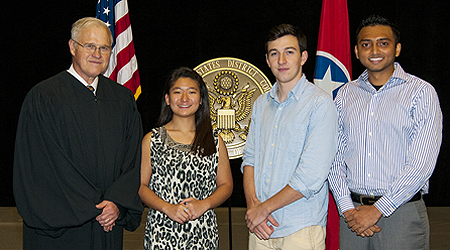 After five years or more of life in America, MTSU students Mike Patel, Levon Mkrtchyan and Tammy Li need no more time to make up their minds. They became U.S. citizens at a naturalization ceremony on the campus of their university today.

MTSU celebrated Constitution Day this Sept. 17 by hosting a rare naturalization ceremony held outside Nashville for new Middle Tennessee citizens. Patel, Mkrtchyan and Li were among almost 300 people taking the oath of citizenship at the event.

The moment was doubly significant for Patel. The 23-year-old biology major from Knoxville is on track to receive his bachelor’s degree in December.

Patel moved to the United States with his family in 2006 from Surat, a hamlet in eastern India near Bombay. An uncle, with whom Patel lived in North Carolina for his first year in this country, sponsored the family.

He admits to a difficult initial adjustment, since he arrived in America as a high-school senior. But Patel said his new friends were nice and, through the international language of sports, he fit in quickly and decided he wanted to stay.

“This country has given me the opportunity to do whatever I want to do,” Patel said. “There is no limit to what I can do here. Over here, I get more time to myself. Over here, I follow my own routine.”

Family is important to Patel, whose father grew sugar cane for a living in India. Now the family operates a motel in Knoxville, where Patel’s brother will graduate from the University of Tennessee in May with a degree in accounting.

If there was a somewhat bittersweet overtone to Patel’s naturalization, it is that he wasn’t able to take the oath with his brother.

“We both applied at the same time, but, somehow, his (government approval) was delayed by a month,” said Patel.

When his brother’s approval finally came through, he happened to be in Memphis, so he went ahead with the oath there. Patel, however, said he liked the idea of having the ceremony at a place that has meant so much to him.

“People have always been nice and decent,” Patel said with a shy smile. “I am very grateful to them.”

Mkrtchyan, a 19-year-old photography major from Yerevan, Armenia, makes his home in Nashville. He could not be reached for additional comment at press time.

Tammy Li, a bubbly 19-year-old freshman majoring in nutrition and food science, came to America from Fujian Province near Hong Kong in the People’s Republic of China.

She lived with her parents in New York for a year but has lived in Smithville, Tenn., since her freshman year of high school. Li, who speaks Mandarin, Cantonese and other Chinese dialects, in addition to English, graduated high school with a 3.5 GPA. Her transcript includes membership in the Beta Club, the Science Club, 4-H and the Student Council.

“In the summertime, I worked six days a week, 12 hours a day, to save money,” Li said. “I am very independent.”

With that kind of track record, it comes as no surprise that Li received a HOPE scholarship and passed her citizenship test in the same week.

“I just feel that this is my home,” Li said. “You have free speech, free religion.”

She has come to feel that MTSU is also her home.

“MTSU gives me a chance to do my best,” said Li. “The teachers are so nice. I feel like if I need help I can just ask people.”

Back home in Smithville, Li raises her voice in song in the Smithville Cumberland Presbyterian Church choir.

“I always put Jesus first, others second and self third,” said Li.

You can read more about the Constitution Day 2012 events and watch a video, too, at mtsunews.com/constitution-day-2012.