Students stand against cancer for Relay for Life e...

Students stand against cancer for Relay for Life event 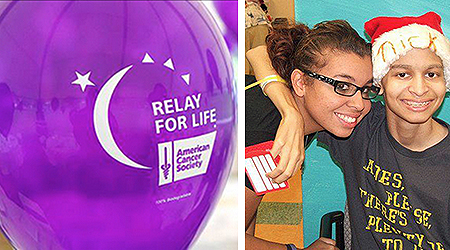 MTSU’s chapter of Colleges Against Cancer is encouraging the community to join the fight against the deadly disease at the university’s first Relay for Life on Friday, April 19, at 6 p.m. at the Dean A. Hayes Track and Soccer Stadium.

In this December 2007 photo, MTSU graduate student Alexandra Alvarez, left, executive director of the MTSU chapter of Colleges Against Cancer, shares a hug in a Miami children’s hospital with her younger brother, Nicholas, who is a cancer survivor. Alvarez is a team captain for Friday’s MTSU Relay for Life event on the MTSU campus and will walk in honor of her brother. (Photo courtesy of Alexandra Alvarez)

Part of the worldwide annual fundraising effort for the American Cancer Society, the MTSU Relay for Life already has more than 40 teams, more than 470 participants and more than $16,700 in donations toward its $20,000 goal.

“For a first Relay for Life, this is incredibly unique, because sometimes it takes three to five years for events to have over 25 teams,” said Alexandra Alvarez, a graduate student in mass communications and executive director of MTSU’s chapter of Colleges Against Cancer.

“We have become incredibly united and are ready to fight back against cancer.”

Designed to celebrate the fight against cancer and raise money for research, Relay for Life teams will gather Friday evening and take turns walking or running laps until Saturday morning, each keeping at least one member walking at all times.

Relay for Life is more than just the walk, however. The 12-hour event encompasses four ceremonies:

The MTSU community has participated in Relay for Life for years, even conducting special fundraisers on campus in support of countywide Relays for Life. This is the first time MTSU has hosted an official Relay for Life on campus, however.

Although the MTSU teams are raising a significant portion of the funds, Alvarez said the best way for the community to support Friday’s relay is to attend and enjoy the festivities.

“We really need people to know that this event is all-encompassing and you don’t have to be on a fundraising team to enjoy all that the relay has to offer,” she said. “Even if people show up for a couple of hours, the support is greatly appreciated.”

Each relay team has a designated campsite featuring a creative fundraiser that they have been working on for months. Attendees can enjoy free food, entertainment and games and can get their own paper lantern in exchange for a $10 donation.

Community events are expected to last from 6 to 10 p.m. MTSU’s Relay for Life will conclude Saturday morning at 6.

All donations will go to the American Cancer Society of Nashville.

“We’re starting something from the ground up, and we hope to leave a legacy,” said Alvarez. “It’s incredible how much money a relay can raise. Hopefully this will continue for many years to come and develop like other college relays, which raise over $450,000 a year.”

Relay for Life is celebrated each year in more than 5,200 communities and more than 20 countries.

To learn more about the 2013 Relay for Life at MTSU, visit www.relayforlife.org/mtsu. You also can connect via Facebook at the Relay for Life-Middle Tennessee State page, www.facebook.com/RFLMTSU, and on Twitter: @MTSURelay4Life.