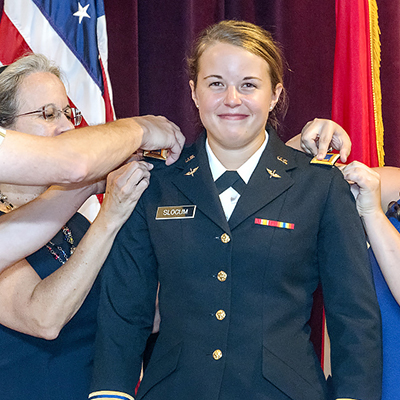 Following university tradition, the summer 2016 commissioning ceremony was held on the eve of MTSU’s graduation to celebrate the students’ completion of academic and physical training and their readiness to serve in various branches of the military.

Both students will graduate Saturday, Aug. 6, with a bachelor’s degree in exercise science from the Department of Health and Human Performance in the College of Behavioral and Health Sciences.

Ogg, a member of the Classes of ’78 and ’87, stressed “integrity, high standards and humor” in his talk.

“Don’t give your integrity away. Never lie. People must trust you,” Ogg told the new officers.

“Hold yourself to the highest standard. Keep a positive approach and attitude. Be able to have the courage to laugh at yourself.”

Lt. Col. Jackie McDowell, who is completing his first year of leading the MTSU military science program, commended both cadets for completing their physical training and keeping their grades up.

The event included the administering of the oath of office, swearing-in and pinning of the commissionees, first salute ceremony and the singing of the Army song.