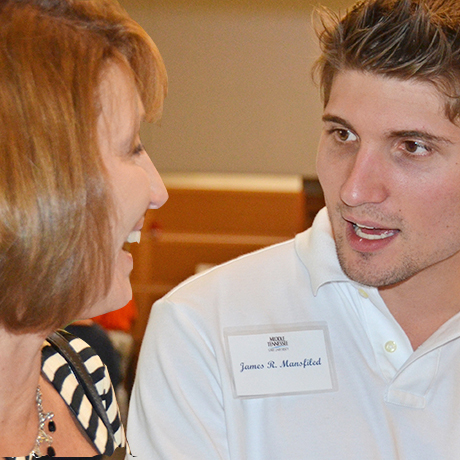 During an MTSU research project this summer, four students needed only three weeks to be in total harmony on a recording project.

They aced the assignment in all phases.

“It has been great,” said their faculty mentor Chris Haseleu, the former chair in the College of Mass Communication’s Department of Recording Industry. “The final product is outstanding. They worked well together, which was part of my proposal … to give and take criticism to advance the project.”

The “EP Music Production” by Dean Hall, Jimmy Mansfield, Frank Gerdts and Steven Helton was one of 43 team and individual projects included in the second MTSU Summer Research Celebration. The event was held Friday, Aug. 1, in the Student Union Ballroom.

The event showcased more than 90 students’ individual and collaborative work.

Mansfield, from Murfreesboro and fellow senior Gredts, formerly from Columbia, Tennessee, and now living in Atlanta, served as audio engineers. Helton, a junior from Cleveland, Tennessee, was an assistant engineer who documented the entire process.

“We documented ever single knob, microphone, placements, the instruments — everything,” said Hall. “It went from creation of the three songs to a master. There were a lot of late-night hours in Studio A at MTSU, plus some of us have studios in our homes.”

Helton agreed with Hall and Haseleu that the four undergraduate students worked as a unit to finish the project.

“The creativity all came together and we got it done,” he said. “This has been the smoothest session I’ve been on.”

In addition to the music production, projects included an area in Parkinson’s disease and other scientific research and a video titled “Coffee: An Animated Short Film and the Production Pipeline.”

Andrew Nolin, a rising junior biology major from Manchester, Tennessee, said he wanted to be a part of the Parkinson’s work because his grandfather, Woody Steinhart of Portland, Tennessee, has been diagnosed with the disease.

“It’s been really eye-opening to be able to work on something like Parkinson’s to try to make a difference,” Nolin said.

Participating students have been conducting Undergraduate Research Experience and Creative Activity, or URECA, research; National Science Foundation-sponsored Research Experiences for Undergraduates, or REU, research; or been part of FirstSTEP, a five-year, $2 million grant funded by the National Science Foundation, providing financial and academic support for students majoring in biology, chemistry, computer science, engineering technology, geosciences, mathematics and physics and astronomy. MTSU is at the beginning of the fifth year.

The event was sponsored by the MTSU Undergraduate Research Center and Dr. Mike Allen, dean of the College of Graduate Studies and vice provost for research.