‘Best of the Best’ National Gu.. 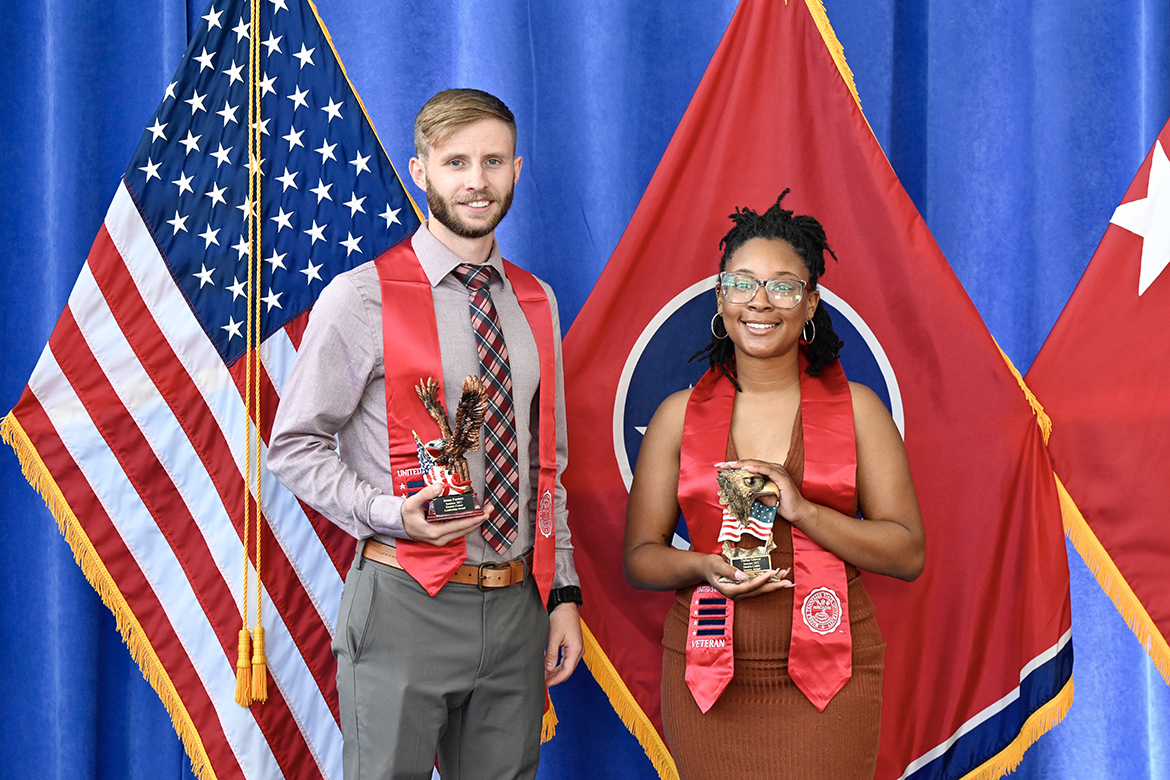 They were among 20 student veterans recognized and presented red stoles at their upcoming graduation at 9 a.m. Saturday, Aug. 6, in Murphy Center. Forty-four student veterans are scheduled to graduate that day.

Stole ceremonies have become a three-times-a-year tradition for the host Charlie and Hazel Daniels Veterans and Military Family Center, home to more than 1,000 student veterans and family members.

Glover, 22, is a specialist with the Army National Guard. The Memphis, Tennessee, native serves with the S.W.E.E.T. Malanin campus organization, a group created to empower and educate young minority women and women of color at MTSU. She also worked at the campus radio station and was the Daniels Center social media coordinator.

“This award means everything to me,” said Glover, who is studying interdisciplinary media in the College of Media and Entertainment. “When I first arrived at MTSU, I wasn’t really sure what I was going to do, but I knew I was going to make an impact. Being at MTSU and joining the Guard allowed me a way into making an impact and making sure I influence different people. This award means confirmation that I’m doing what I’m supposed to be doing and I accomplished my goal.”

Brothers Jonas and Orrin Farmer are aerospace professional pilot majors in the College of Basic and Applied Sciences.

Regarding the Leadership Award, Jonas Farmer, who has been a flight instructor, said “it means I’ve been able to put a lot of good out there and show people that I can help them. When I’ve had difficulty finding help at times and also given access to the same help the Charlie Daniels Center has given me, MTSU’s helped me grow as a leader as well as my time in the military.

“I got to experience what good (and bad) leadership was, so I try to take the good from both of them and apply it to everything I have going forward, and I’ve gotten a lot of good leadership from my brother Orrin. He’s helped me tremendously through a lot of this.”

Jonas Farmer has “worked with other veterans to help them understand the pro pilot program and navigate the VA to help ensure they received all the benefits available,” said Anne Anderson, the Weatherford Chair of Finance chairholder in the Jennings A. Jones College of Business.

Orrin Farmer said graduating together “is a tremendous point of pride. I don’t think I could’ve done it without him in a STEM (science, technology, engineering and math) field, going from high school dropout to STEM graduate here with an aerospace bachelor’s degree. It means a lot to me, to my family, and I’m proud of him every step of the way. … He lifted me up along the way. He led me to being here in school.”

‘Make the world a better place’

Keith M. Huber, MTSU senior adviser for veterans and leadership initiatives and retired U.S. Army lieutenant general, told the audience — which included family members and prospective employers — that at the Daniels Center, “we’re here to serve.” He later told the graduates “to use those lessons and that experience to continue to make the world a better place. Be worthy of each day you get because life is far too uncertain and precious.”