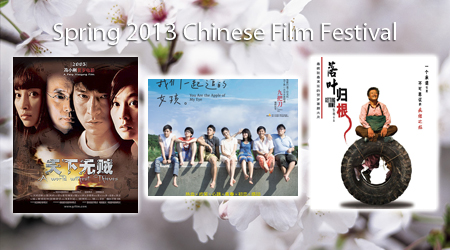 MTSU’s free Chinese Film Festival celebrates its 16th semester beginning this Sunday, March 24, with “A World Without Thieves,” the first of four films to be screened in Room 103 of the Bragg Mass Communication Building.

Sponsored by the College of Mass Communication and the Confucius Institute, each movie will begin promptly at 6 p.m. in COMM 103. Chan Chen, a mass-comm master’s degree candidate, will lead a question-and-answer session after each film.

All movies in the series have English subtitles. There is no admission charge, and each is open to the public.

Sunday night’s film, “A World Without Thieves,” focuses on a pair of con artists who meet an artless carpenter and change their plans when he’s targeted by thieves on a train.

A real-life romance tale of teens who meet in high school, grow up and drift apart, “You Are the Apple of My Eye,” which will be screened March 31.

On April 7, a poor migrant worker’s determination to keep a promise after his friend’s unexpected death leads to a cross-country odyssey in “Getting Home.”

And on April 14, special guest professor Tan Ye, director of the Confucius Institute at the University of South Carolina and an expert on Chinese films, will present and discuss a film to be announced.

Dr. Bob Spires, professor of electronic media communication and the festival’s organizer, said student attendance will be taken at each screening and reported to instructors on request.