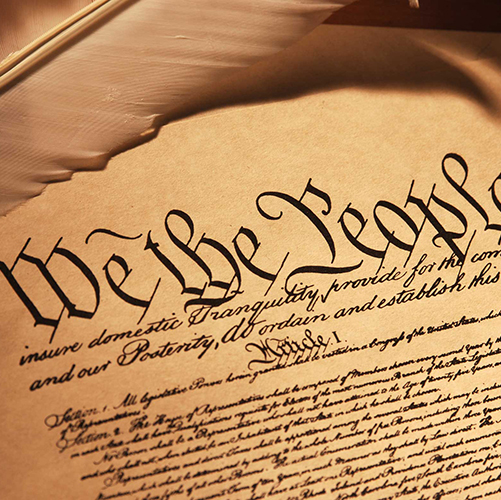 A new national survey by the Nashville-based First Amendment Center indicates that nearly a third of Americans still can’t name one of the five freedoms — speech, religion, press, assembly and petitioning the government — guaranteed by the U.S. Constitution.

Ken Paulson, dean of MTSU’s College of Mass Communication and president of the Newseum Institute’s First Amendment Center, said it’s “disheartening” to see a continuing lack of knowledge among citizens about their most basic rights.

Twenty-nine percent of the 1,006 adults surveyed in May by phone in the contiguous 48 states for “The State of the First Amendment: 2014” couldn’t think of a single one of their First Amendment rights. That figure is down from 36 percent in 2013, however.

“We’ve asked Americans every year whether they could name their core freedoms, and we were optimistic that we had turned a corner on awareness in recent years because of some of the perhaps lesser-known freedoms, including the right to assembly, were showing up more in their responses,” Paulson said. “We thought that might be because of reports on the Occupy movement.”

Prior years’ reports showed as many as 14 percent of the people surveyed were aware of their right to gather peaceably in public places, but the figure abruptly dipped from 11 percent in 2013 to 7 percent this year.

“It’s disheartening that in a nation founded on freedom that so few know them,” Paulson said.

He added, however, that he’s hopeful that awareness in specific areas is growing.

“What’s most encouraging about this year’s survey is the growing support for free speech rights for young people,” the dean said. “We’ve seen a number of high-profile cases in which students were punished for comments they’d made outside of school in social media.

“The courts have been split in their decisions, but more Americans are obviously seeing young people as what they truly are: citizens, with the same rights as adults.”

Paulson also said he is encouraged by the people who see the media in a watchdog role for the government, regardless of political affiliation.

“Regardless of whether you’re in the Republican Party, the Democratic Party or the Tea Party, these people realized that you have a strong vested interest in knowing what your government is doing,” he noted.

The results of “The State of the First Amendment: 2014” were announced this week during the Al Neuharth Free Spirit and Journalism conference in Washington, D.C. The survey has an error rate of plus or minus 3.2 percentage points.

The 2014 survey also discussed current First Amendment-related news, including whether the government can require religious groups to provide health care to same-sex partners and whether wedding businesses must serve same-sex couples.

You can find a printable, searchable copy of the 2014 survey, as well as previous surveys, at the First Amendment Center’s website at http://ow.ly/yxrjZ.

You can learn more about the First Amendment and your rights — and responsibilities — as a citizen at www.firstamendmentcenter.org/about-the-first-amendment. Learn more about MTSU’s College of Mass Communication at www.mtsu.edu/masscomm.