MTSU professor among Top 10 at..

Hidden Children and the Holoca..

Holocaust survivors who were forced to spend their childhood years in hiding shared some of their wisdom with middle school and high school students Tuesday, Oct. 15, at MTSU.

Dr. Nelly Toll and John Koenigsberg told how they were spirited away from their birth families and placed with other families as Nazi Germany sought to exterminate Jews throughout occupied Europe. 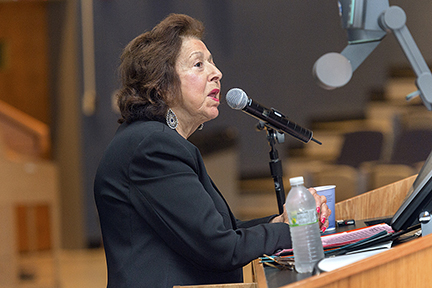 The Tennessee Holocaust Commission conducted the gathering as part of the university’s Biennial International Holocaust Studies Conference, which continues through Friday, Oct. 18.

Before an audience of youngsters and teachers interested in learning how to teach the Holocaust, Toll displayed some of the 64 watercolor paintings she created as a little girl hiding with a sympathetic family in Poland.

Toll painted vivid pictures of happy family moments while reserving her documentation of the horrors of World War II for verbal entries in a journal.

“My pictures were really not reflecting the reality that I lived with, but a fantasy and a better world,” she said.

After she went to live with another family, Toll and her mother had a hiding place with a trap door. Since the door to the room stayed locked, the signal for them to enter the hiding place was for the lady of the house to say, “I can’t find my keys. Where did my husband put my keys?”

Koenigsberg praised his parents, both of whom worked at a Jewish hospital in Amsterdam, The Netherlands, for giving up their only child when he was 5  1/2 years old. 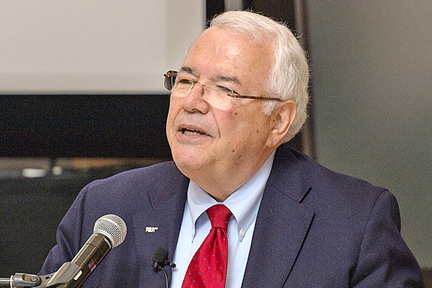 He said his parents “saw brothers and sisters systematically receive their orders to report” to a local theater from which they were transported to concentration camps.

His parents ensured his safety by telling the Gestapo he was ill. Koenigsberg was rushed to the hospital, where he underwent a fake appendectomy. Later, he was placed with a Catholic family miles away in the province of Limberg, where he pretended to be the family’s sickly cousin.

Koenigsberg worked to ensure that the family who concealed his true identity received the honor of “Righteous Among Nations,” the highest honor Israel bestows on non-Jews.

“It was eye-opening,” said Melissa Dixon, a sophomore from Soddy-Daisy High School in Soddy-Daisy, Tenn. “Not a lot of people who went through this are around now. It’s really amazing.”

“I think it’s a fabulous experience for the students,” said Bonnie Moses, who teaches world and American history at Harpeth Hall High School in Nashville. “It’s furthering their understanding of the Holocaust. The focus on childhood is especially meaningful to high school students.”

Toll’s artwork will be on display Wednesday through Friday at MTSU’s James Union Building, where the rest of the International Holocaust Studies Conference will take place.

For conference information, contact Dr. Nancy Rupprecht at 615-898-2645 or holocaust.studies@mtsu.edu, or Dr. Elyce Helford at 615-898-5961 or elyce.helford@mtsu.edu. You also can visit www.mtsu.edu/holocaust_studies.

For parking information, go to http://tinyurl.com/MTSUParkingMap13-14.

Visiting high school students from the region applaud Oct. 15 during a lecture inside the Learning Resource Center at Middle Tennessee State University. The lecture was part of the Tennessee Holocaust Commission’s Biennial International Holocaust Studies Conference.