October 'Out of the Blue' stud.. 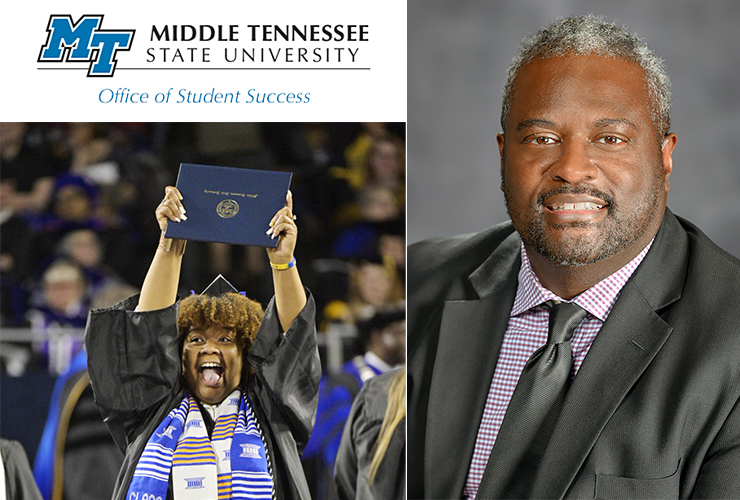 Walter Tarver is ready to make an impact at Middle Tennessee State University. As the newest associate vice provost of Student Success, he is in the perfect position to do just that, assuming an integral role in supporting the university’s efforts to ensure entering students stay on track to earning their degrees.

Tarver’s first time on campus was the day he interviewed, and he could tell that MTSU, though twice as large as the college he worked at, felt like a close-knit family.

“I definitely felt that family environment, and it’s tough to get that feeling when there are 20,000 students walking around,” said Tarver, who is joining MTSU from Stockton University in New Jersey and fills the role previously held by the recently retired Vincent Windrow.

“We are very fortunate to have Walter Tarver in this position,” said Richard Sluder, vice provost of Student Success and dean of University College. “He has a proven track record, is committed to this work, and his experience will be invaluable in further advancing programs that are already high performing. His work will benefit our students.”

The position Tarver finds himself in has several goals, which include increasing retention and graduation rates and closing the equity gap in educational outcomes for underserved and at-risk students. Tarver says he’s up for the task because he has been in similar situations many of these students find themselves in today.

“Students sometimes think we just popped up on campus in these positions,” Tarver said. “I think as professionals we need to tell our stories as well. Not all of our journeys are paved smoothly, and many of us come from the same backgrounds as our students.”

Tarver himself is a first-generation college student, so he’s no stranger to hard work. He knows that this job is not easy and comes with long hours, but he’s OK with that. Like many others who work in education, he feels that what he is doing is not just a career, but a mission.

“I have a passion for this, and it started before I even realized it,” Tarver said, recounting his days as a student working in the career development office. “It’s been a winding path to get to this point, but it’s been my destiny to do this type of work.”

In fact, when Tarver and his wife, Corrinne, relocated for her job as the athletic director and gymnastics coach at Fisk University, he had been considering a career in the private sector and wasn’t looking to get back into higher education.

That all changed when he heard about the open position at MTSU.

“If I had to describe what I wanted to do in higher ed, this would be it,” he said. “It really ties everything together with my experience and what I wish to do with the rest of my professional life.”

Student success is a campuswide effort, Tarver said, and he hopes to get everyone on board with what his office is doing. He expects that to be easy, as MTSU is already doing so many great things regarding equitability and student resources.

“It’s so exciting to come to a place and just build on programs that are already going well,” he said.

One of those programs is MTSU’s Scholar Academy, an early arrival program with an emphasis on the needs of first-generation, underrepresented, and/or underprepared students, by providing them with an introduction to college in a supportive learning environment. Tarver provided leadership for a similar effort at Stockton University and said it was one of the most rewarding things he’s done in his career.

“These are the types of programs that really move the needle in terms of equity and making students feel comfortable on campus,” he said, noting that many of the students in these programs likely never considered attending college before hearing about them. “We found time and time again that these students have higher retention rates, are highly engaged on campus, and are more involved in clubs and other extracurricular activities.

“These programs take a student who may not have the confidence that they’re college ready and shows them that they’re capable and lets them ask all the questions they need to ask before everyone else is back on campus.”

Tarver knows there is work to do, but he’s confident that the campus community is ready for it. He says he’s taken the last several weeks before starting to really get to know what MTSU is already doing in terms of ‘leveling the playing field’ for students.

“At my last institution we battled with students not being able to afford the books they needed for their classes,” he said. “I know there are programs in place now to make it easier for students at MTSU not to have that same problem.”

Tarver knows that sometimes even though the programs exist, students may not know about them. He says he wants to create more ways for students and faculty and staff to have a dialogue and interface with one another.

“It all starts during orientation and those first couple of class sessions,” he said. “We have to make sure students are comfortable approaching their professors when they need help. “We always say ‘if you need something, contact us,’ so we need to be sure that we all remain accessible.”

Reach Tarver at Walter.Tarver@mtsu.edu. For more information about the MTSU Office of Student Success, visit https://www.mtsu.edu/studentsuccess/index.php.