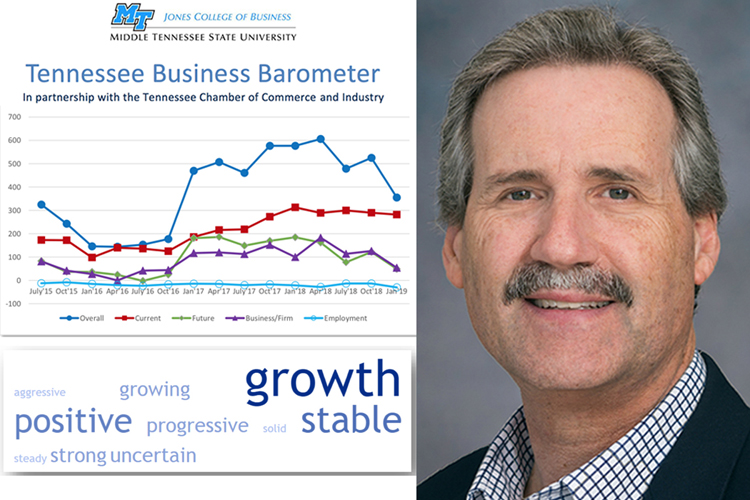 The Tennessee Business Barometer dropped sharply from the end of last year, according to the latest snapshot of business leaders’ opinions as measured by MTSU’s Jones College of Business.

The Business Barometer Index now stands at 355, down from 525 in October 2018, and its lowest level since before the presidential election in 2016.

“Even though perceptions of the current economy remain relatively steady, expectations for the future economy as well as for individual firms/businesses have fallen,” noted Tim Graeff, MTSU marketing professor and director of the university’s Office of Consumer Research. “The reason for this drop can be summed up in one word — uncertainty.”

The index is determined by the percentage of positive and negative responses to a series of economic questions. Find the full survey report and previous reports at http://www.mtsu.edu/consumer/reportsbarometer.php.

Political uncertainty accompanying the new Congress, apprehension about potential tax increases and fears of greater governmental regulation all contributed to unease among business leaders, along with the partial government shutdown.

Compared to October, concerns related to political uncertainty, economic uncertainty, and increasing business/government regulation have risen dramatically, the survey revealed, and have given rise to the decreasing expectations for the future.

Even though the overall index fell dramatically, perceptions of the economy are still relatively positive.  The percent of business leaders with positive views of the economy still more than doubles the number who have negative views. 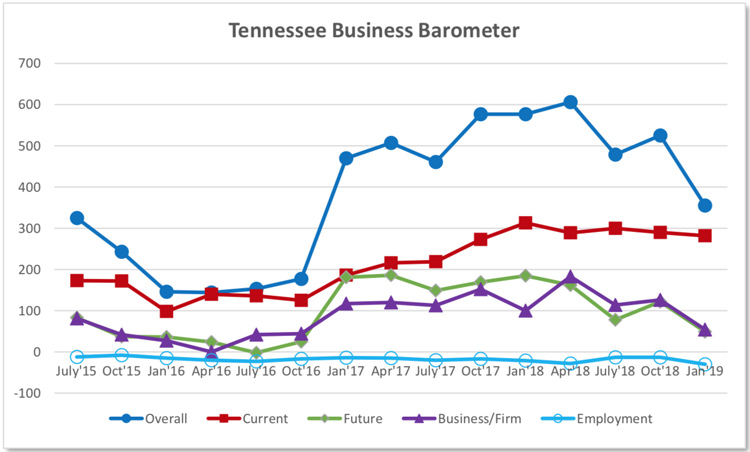 • Many of the skills employers say are important are also those that many of today’s employees are lacking. This is especially true for soft skills, such as interpersonal skills, motivation, work ethic, and the ability to work with others. The ability to solve problems is also a highly valued skill that is lacking in today’s employees. This gap between what employers need and what employees lack can lead to significant frustrations in terms of staffing and growing a business.

This word cloud shows the 10 most frequently used words from respondents surveyed for the latest Tennessee Business Barometer Index about the state of the Tennessee economy. The darker the word, the more frequently it was cited. (Courtesy of the MTSU Office of Consumer Research)

The current online survey of 77 business leaders from across Tennessee was conducted in partnership with the Tennessee Chamber of Commerce and Industry from Jan. 14-25. The sample of respondents includes business owners (23 percent), vice presidents (9 percent), senior managers (22 percent), and managers/others (45 percent) at firms of various sizes.

The next Tennessee Business Barometer survey is scheduled for April.The inaugural survey in July 2015 registered an index of 325.