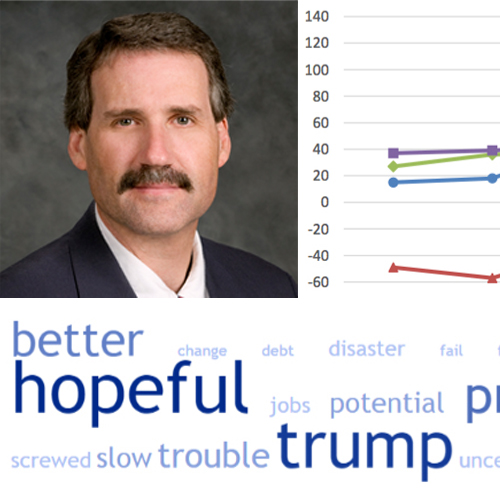 The most recent Tennessee Consumer Outlook Survey indicates consumers across the state are feeling much more optimistic about the economy during this holiday shopping season.

The Tennessee Consumer Outlook Index soared to 113 from 47 in September, according to the latest statewide snapshot of consumers by Middle Tennessee State University’s Office of Consumer Research. The quarterly survey consists of a series of questions that measure areas such as how consumers feel about the local, state and national economies as well as their personal financial situations and the job market.

“This pattern of improving outlook was consistent across all three regions of the state,” said Tim Graeff, director of the Office of Consumer Research in MTSU’s Jones College of Business. “Additionally, Tennessee consumers feel optimistic about the potential effects of Donald Trump’s election to president on the overall American economy.”

The current survey of 630 Tennessee consumers was conducted between Dec. 1 and Dec. 8, with a margin of error of 4 percent. A copy of the full report and previous report are available at www.mtsu.edu/consumer/tnoutlookreports.php.

When asked about the possible effects of the recent presidential election on the economy, the majority of Tennessee consumers expect that Trump’s victory will have a positive effect on the future of the overall American economy.

“Even though there were minor differences in response to the recent election across the three regions of the state, the general pattern of positive expectations is consistent across the state,” Graeff noted. “The anticipation of decreased business regulation, favorable tax policies, construction spending for infrastructure improvements, and a more business-friendly climate might explain such positive views.”

This chart shows results of the overall Tennessee Consumer Outlook Index and sub-indices since September 2015. The index is measured quarterly. (Courtesy of the MTSU Office of Consumer Research)

In addition to tracking an overall index, the outlook survey also includes sub-indices that measure consumers’ outlook on their current financial situations, their future expectations and their purchasing plans.

Overall, Tennessee consumers feel much more optimistic about the future of the economy, Graeff noted, with the Future Expectations Index rising significantly from 28 to 80.

“In general, Tennessee consumers have found renewed optimism regarding the future of the overall American economy, the state’s economy, the job market, their personal financial situation, the stock market, and the value of their savings and investments,” Graeff said.

“Taken together, this is exactly the type of good news retailers want to hear heading into the Christmas and holiday shopping season.”

Consumers were also asked specifically about their shopping and spending plans for the Christmas and holiday season. When asked if they did any shopping over the Thanksgiving weekend (including Cyber Monday), most consumers either made purchases online (40 percent) or went to big box retailers such as Walmart or Target (37 percent). Three in 10 (30 percent) did not do any shopping during the traditional Thanksgiving weekend shopping days.

Improving optimism regarding the job market and personal finances means consumers may be more willing “to open up their wallets and spend money” in the future, Graeff said.

Consumers in the latest Tennessee Consumer Outlook Survey were also asked to identify the one word that came to mind when they thought about the future of the overall U.S. economy. The word clouds in this graphic show the 20 most frequently mentioned words, by region of the state. The larger the word, the more frequently it was mentioned. This can provide clues about the thoughts on consumers’ minds as they responded to the survey. These word clouds show that the result from the recent presidential election was on the minds of many consumers. (Courtesy of the MTSU Office of Consumer Research)