TBR approves Thomas as VP for .. 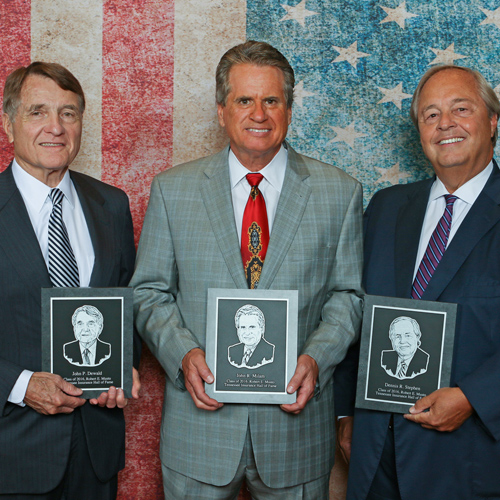 This year’s inductees included John Dewald of Memphis, John Milam of Knoxville and Dennis Stephen of Columbia. The induction ceremony was held July 26 at the Embassy Suites Hotel and Conference Center in Murfreesboro.

The Insurance Hall of Fame has now inducted 65 members since its inception. The hall is coordinated through the Tommy T. Martin Chair of Insurance in MTSU’s Jennings A. Jones College of Business.

The Robert E. Musto Tennessee Insurance Hall of Fame at Middle Tennessee State University inducted the 2016 class during a July 26 ceremony at the Embassy Suites Hotel and Conference Center in Murfreesboro, Tenn. Pictured, from left, are inductees John Dewald of Memphis, John Milam of Knoxville and Dennis Stephen of Columbia. (Submitted photo)

A Texas A&M University graduate, John Dewald served a stint in the U.S. Air Force before becoming an early pioneer in the insurance brokerage industry firm. He started his career with Aetna Life Insurance Co. in 1962, forming his own firm, Dewald & Associates, in 1964.

Along with wife Sue, who worked in the business with him, Dewald later changed the name to Agency Services Inc. (ASI) in 1977. Throughout his career, Dewald was active in professional organizations such as the National Association of Life Underwriters and the National Association of Insurance and Financial Advisers. In 1982, Dewald’s son, Jack, joined his father in the business, and in 1994, Dewald retired at age 60, selling the firm to his son.

MTSU alumnus John Milam is executive vice president, human capital and benefits, for Willis Towers Watson in Knoxville, a firm at which he’s worked since age 22. A native of Tupelo, Mississippi, Milam moved to Nashville with his family when he was 11. He attended Nashville schools and later earned his business degree from MTSU.

Milam is a member of the Million Dollar Round Table (MDRT) and the Top of the Table, two of the most elite professional organizations for financial service professionals. He was named Tennessee Association of Insurance and Financial Advisers Professional of the Year in 2003.

Among his civic contributions, Milam served six years on the United Way Board of Directors. He has also served as president of several professional associations, including The Dream Connection, a wish-granting organization for seriously ill children. Last year, MDRT awarded a $50,000 grant to The Dream Connection in Milam’s honor for his work with the organization. It was the largest grant ever given by the 43,000-member MDRT on behalf of one of its members.

His civic involvement includes serving four years as board chairman for Columbia Academy, a private Christian school that serves pre-school through 12th grade. He served as a member of the school’s board of directors for 15 years and on its executive committee eight years.

The Hall of Fame is named for the late Robert E. Musto, longtime vice president of the National Life and Accident Insurance Company. The hall, which is under the auspices of the Tommy T. Martin Chair of Insurance in MTSU’s Jennings A. Jones College of Business, is located on the west wall of the first-floor south lobby of the Business and Aerospace Building at MTSU.

MTSU offers an insurance concentration through the Department of Economics and Finance within the Jones College. For more information about the department, go to www.mtsu.edu/econfin.