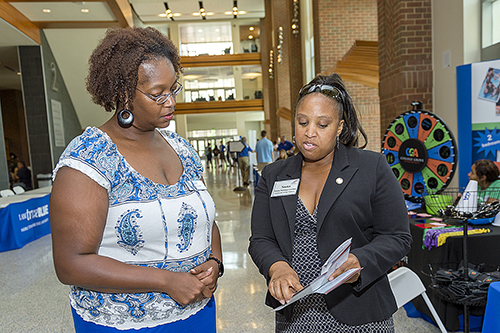 It’s “getting to know you” time for Tennessee’s higher education resource officer and the more than 52,000 people who keep the state’s public colleges and universities functioning.

Nneka Norman-Gordon is making the rounds of schools in the Tennessee Board of Regents and University of Tennessee systems to explain her job duties.

Norman-Gordon’s job was created July 1, 2013, under the Comptroller of the Treasury to help faculty, staff and other higher-education employees function more efficiently.

“They’re my constituents, and I’m here to serve,” Norman-Gordon said during her Aug. 6 stopover at MTSU’s Student Union.

The higher education resource officer can serve as a conduit between employees with questions or issues and the people who can provide answers, either within an institution or at the governance level.

“The mission is to make government work better, to the extent there are institutional barriers, by shining a spotlight on it, perhaps discussing a different method of handling an issue,” Norman-Gordon said.

In some instances, Norman-Gordon performs a liaison’s role.

When a professor at one TBR school complained that her job was coming to an end because her applied research was not being considered along with her peer-reviewed research, Norman-Gordon agreed to sit in on a meeting between the key players.

The matter was resolved in the professor’s favor.

Norman-Gordon can field inquiries not only from the higher education community but also from legislators and other individuals and agencies. She has used her contacts to explore how equipment grant funds were distributed, the criteria for those decisions and which programs were unfunded, among other items.

Norman-Gordon, a 2012 graduate of the Tennessee Government Management Institute, earned her bachelor’s degree from Hampton University in Hampton, Virginia, and her master’s degree in industrial/organizational psychology from Austin Peay State University.

She has worked for the comptroller’s office for more than nine years. Before assuming her current position, she worked as a legislative research analyst for the state’s Offices of Research and Education Accountability.

Norman-Gordon runs the office alone at the moment, but she said she doesn’t rule out the possibility that the office will grow over time.