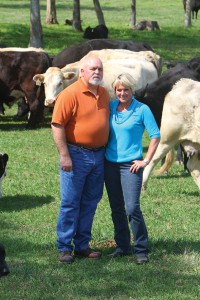 Farmers aren’t always found on the farm, according to Donna Jo Curtis (’80), president of the Alabama Cattlemen’s Association (ACA). These days, future farmers are found in colleges studying such diverse disciplines as plant science, biotechnology, animal science, horticulture, and forestry, to name a few.

“Agriculture is the basis of everything and the sustainability of this nation,” Curtis says. “It’s said that we’ll be feeding nine billion people in a decade. The technology it’s going to take for those of us in the world of agriculture to meet that need is unbelievable.”

Farm life has changed. Statistically, there are far fewer “family” farms now, but the ones that are left are working more acres. Technology is absolutely necessary to even plant, according to Curtis, which leads to all sorts of job possibilities—and this is why agribusiness and agriscience departments are thriving components of many universities.

“You don’t have to be raised on a family farm to work in some aspect of the agriculture business,” Curtis says. “If a student has an interest in any aspect of agriculture—farm animals, becoming a veterinarian, studying horse science, or studying soil science—there is a broad spectrum of jobs out there.”

Curtis, only the second woman to lead the ACA, lives and works on her 300-acre farm in Thatch, Ala., where she manages a cow-calf program running 120 cows. She has a B.S. in animal science and a minor in secondary education, and while her plans were not to teach in school settings, she finds herself educating consumers in her high-profile position.

“One of my primary responsibilities is to keep the presidents of all the county associations up to date about what is going on at the national level. I also work on member recruitment—especially getting young people involved in the beef industry,” she says.

According to Curtis, surveys of consumers have shown that most people are disconnected from farm life, yet they are the buyers of the industry’s end product. Beef cattle production ranks second behind broiler chickens in cash receipts among Alabama farm commodities. Alabama cattle producers sold $395.8 million worth of cattle and calves in 2011. Cattle are produced in every county, and cattle production represents a $2.5 billion industry in Alabama. The state’s climate and land are ideally suited for growing forage and raising cattle, and as of January 2012 there were 1.2 million head of cattle and calves on Alabama farms.

“I am the face of the producer,” Curtis says. “I help consumers understand what we do and help them to see the beef industry in a positive way.”

Curtis grew up on her family’s cattle farm and always intended to raise cattle after college. Her husband, John Curtis (’78), graduated from MTSU with a degree in animal science.

The two were high school sweethearts, which helped push Donna Jo to MTSU, a decision she has never regretted.

She recently returned to MTSU on Field Day and saw the University’s new $4.3 million, 435-acre dairy located six miles east of campus. The new dairy opened in September 2012. One-third of all the milk produced by a herd of 70 cows is consumed by students on campus, and the rest is sold to Virginia and Maryland Milk Producers. The dairy is only one thriving aspect of the School of Agribusiness and Agriscience: the school has increased its number of undergraduate majors by 14 percent since 2010.

“I am so impressed,” Curtis says.

Curtis’s children are also in the family business. Daughter Lauren Graham, also an MTSU graduate (’10), is teaching agriscience in Limestone County, Ala. Son Landon graduated from Auburn University in May with a degree in business and agricultural economics, and his twin sister, Landria, is set to graduate from Auburn in December with a degree in animal science. Agriculture in the Curtis family, it appears, is a family affair.