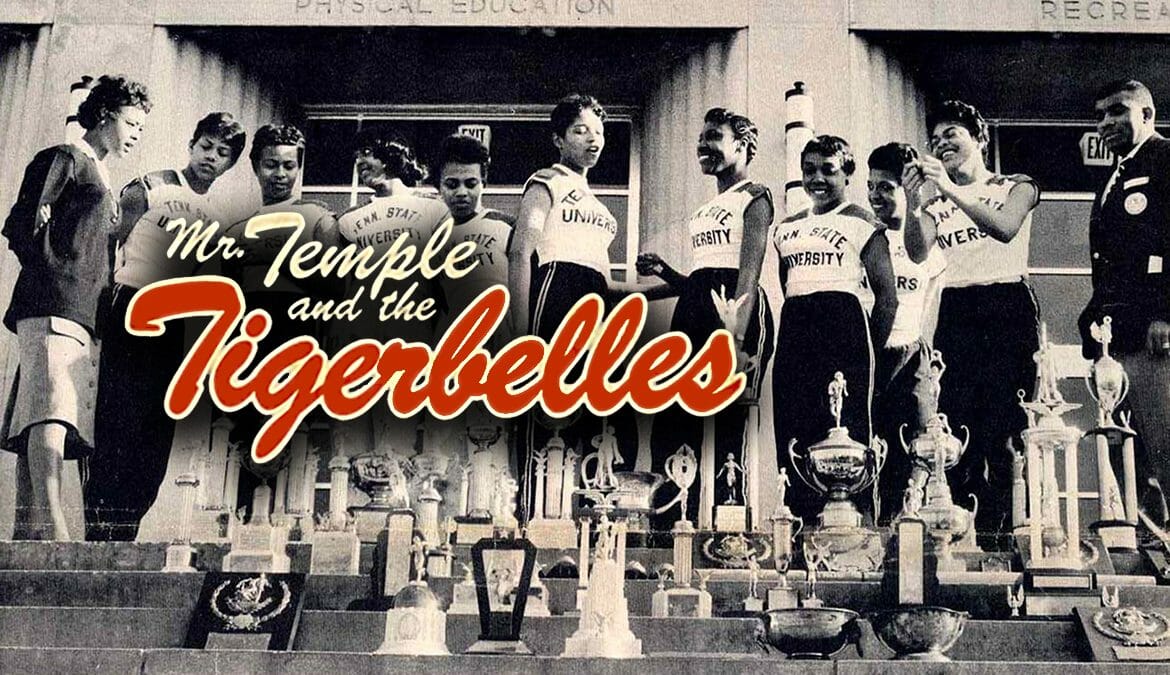 NASHVILLE, Tenn. — Mark your calendar and lace up your running shoes to join a special preview Thursday, Oct. 18, of a new documentary, created by an Academy Award-nominated MTSU Media Arts film professor and students and faculty from across the College of Media and Entertainment, celebrating the 40 gifted women of the Olympics-winning Tennessee State University Tigerbelles and their coach, the beloved Ed Temple.

“Mr. Temple and the Tigerbelles,” which was included Oct. 9 on the International Documentary Association’s short list of film shorts nominees for the 2018 IDA Documentary Awards, boasts a roster of informative interviewees and rare footage of the color-barrier-busting athletes who brought home 23 medals from the 1960 Olympics in Rome, including 16 golds.

The most famous Tigerbelle was Wilma Rudolph, who became the first American to win three gold medals in a single Olympic Games. All the women continued their college education, all earning their bachelor’s degrees and several earning master’s and doctorates.

This special preview of the 40-minute documentary, set 6:30-8:30 p.m. Oct. 18 at the Nashville Public Library’s Main Branch, located at 615 Church St. in Nashville, is free and open to the public.

It will be followed by a panel discussion featuring several members of the Tigerbelles, including Wyomia Tyus, the first person to win a gold medal for the same event in consecutive Olympics. She won the 100-meter dash in 1964 and 1968.

“The more we got into the story, the more pressure we put on ourselves to tell it in an innovative way,” says writer-director Tom Neff, who teaches film, documentaries and media management at MTSU and is the Emmy-winning founder of the Documentary Channel.

“So many people contributed to the film. Students and faculty at MTSU either donated time or worked for very little pay. The editor, Barry Rubinow, did a stunning job of combining the footage from the Olympics with footage from the civil rights era, as well as footage from the Tigerbelles who still run today for Tennessee State University.”

“Mr. Temple and the Tigerbelles” was nearly three years in the making. It aired last spring on the CBS Sports Network, and the filmmakers plan to enter it in festivals. It was already named as an official selection of the 2018 HollyShorts Film Festival in August.

Billy Pittard, chair of the Department of Media Arts, says bringing students, faculty and staff from multiple departments together on projects like “Mr. Temple” is a common practice at MTSU.

“This interdisciplinary approach to independent faculty projects is one of the things that truly distinguishes our program,” Pittard explains. “Every department in our College of Media and Entertainment contributed to ‘Mr. Temple and the Tigerbelles.’ Students worked on production, (Department of Recording Industry) faculty member Matt Foglia mixed the film, animation faculty member Richard Lewis was the digital effects artist, (assistant director of technical systems) Mike Forbes contributed technical expertise, and it goes on and on.

“We are interested in reaching a national audience, and with the CBS Sports Network television premiere and the festival outreach of this film, we are achieving our goals.”

“The first time I saw the promo for the film, I knew this was a story that had to be told,” the film’s co-producer, Shelley Hay, recalls. “These amazing women struggled through untold adversity to world success.

“We are entering the film into festivals but wanted the people of Nashville to see a preview first. We are so thrilled to have every gold medal Olympian able to attend the screening, as well as Ralph Boston, who won the gold medal for broad jump the same year that Wilma Rudolph and Muhammad Ali won their 1960 Rome Olympic gold medals.”

“People don’t realize what a treasure they have in their own backyard,” says Roberts. “Coach Temple is probably the most important coach in American history.”

Nashville historians Dwight Lewis and Linda Wynn provide important historical context in the documentary, which places the successes of the Tigerbelles firmly in the perspective of the civil rights era. The gifted young women of TSU struggled to practice with no financial aid and no support, all during the Jim Crow era.

“Coach Temple was given $300 and two station wagons and told to go compete against the world,” says Lewis, who’s now finishing his own book on the Tigerbelles.

“They could win gold medals at the Olympics, on a world stage, and yet come back home and not be able to eat in a restaurant,” adds Gentry, whose family has served TSU since the late 1940s and was very close to Temple.

Roberts notes that DVDs of “Mr. Temple and the Tigerbelles” will be available to purchase on-site and online, “with a significant portion of sales going to the Ed Temple Scholarship Fund and the Ed Temple Wing of New Hope Academy. We want to continue the legacy of this historic group.”

Tyus also plans to donate a copy of her new autobiography, “Tigerbelle,” to the Nashville library after the preview and sign copies for all who purchase one that evening.

You can learn more about the film by visiting its website, www.tigerbellesmovie.com.

The Department of Media Arts at MTSU serves students majoring in animation, interactive media, media management, photography, and video and film production. You can learn more about the department at www.mtsu.edu/mediaarts.

Members of the 1959-60 Tigerbelles from Tennessee State University, then called “Tennessee A&I University,” join their coach, Ed Temple, in looking over the 50-plus trophies they’d won “over the years” in this file photo from the Ed Temple Collection at TSU. From left are Shirley Griffin, Wilma Rudolph, Shirley Crowder, Barbara Jones, Lucinda Williams, Martha Hudson, Annie Smith, Joann Terry and coach Temple. “Mr. Temple and the Tigerbelles,” a new documentary created by Academy Award-nominated MTSU Media Arts film professor Tom Neff and students and faculty from across the College of Media and Entertainment, will have a free public preview Thursday, Oct. 18, at the Nashville Public Library’s Main Branch. (Photo courtesy of Tennessee State University)

Members of the Tennessee State University Tigerbelles, former and current, gather on the steps of TSU’s Kean Hall after the September 2016 memorial service for their beloved coach, Ed Temple. Over his 40-year career as a track and field coach, Temple guided the talented women to Olympic gold as well as advanced educational degrees. They earned the most renown during the Jim Crow 1950s and ’60s when they raced around the world on a budget hardly more than the strings in their racing shoes. “Mr. Temple and the Tigerbelles,” a new documentary created by an Academy Award-nominated MTSU Media Arts film professor and students and faculty from across the College of Media and Entertainment, will have a free public preview Thursday, Oct. 18, at the Nashville Public Library’s Main Branch. (Photo courtesy of Tennessee State University)