Tip of the Iceberg

Tip of the Iceberg 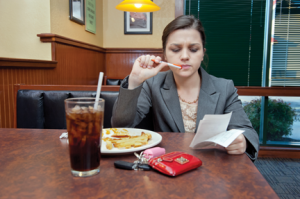 It’s a topic that never fails to spark a heated discussion: what is the proper amount to tip a server? And what are the appropriate determining factors involved in making that decision?

Recent MTSU graduate Kaitlin Beck says the reason tipping a food server is such a hot-button issue is that for whatever random reason, we’ve decided as a society that this is one area where we are going to put our fates in the hands of the people to whom we are catering.

“We are relying on human compassion and sympathy and understanding in order to make a living,” Beck says. “If the kitchen undercooks your burger, I didn’t have anything to do with that, and I am so sorry, and I’ll give you free fries, but will you forgive me, will you please give me my living? Some people say ‘yes’ and some people say ‘no’ . . . essentially, we’re making a quantifiable, emotional decision about [a] fellow human being.”

Put in context of the workplace as a whole, it’s an odd thing to put one’s earnings at the whim of consumers.

“You don’t have auto mechanics saying to you, ‘I hope you were happy with the service,’” Beck says. “So it’s a strange kind of natural experiment—this one sector where we arbitrarily have decided this is different.”

An economics major and also a server at a local restaurant chain, Beck became determined to investigate the phenomenon of tipping and make it the basis for her thesis. What she found is that there are significant gaps in current research. For instance, there are published studies indicating that women are more generous than men but other studies that indicate the opposite. 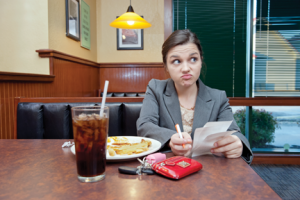 One hallmark of the existing literature? Much of it is based on research conducted in behavioral lab settings, not actual restaurants. That’s where Beck gets excited about her work. She gathered data (receipts) from actual servers working in restaurants for a lengthy period of time.

Beck’s research intended to peer more deeply than gender, skin color, or whether or not a patron has food service experience as factors for determining how we tip. Her research looks at overcoming such demographic likenesses or differences to find the connections that truly steer a person’s fateful moment with pen and receipt in hand.

“For instance, I was recently serving an older, black male-which is, demographically speaking, already two strikes against me as a white, female server,” Beck explains. “But I saw his last name, and I remembered that name was the name of a professor at MTSU that taught a course my boyfriend took. So I asked this person if he had a connection [to] MTSU and, sure enough, the person’s son was the professor, so we suddenly connected.” 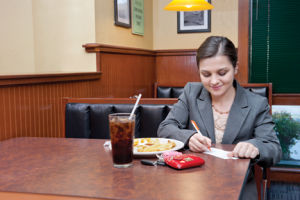 • There was no significant difference between the amount tipped by men and women.

• The average tip left by a college-aged customer was 21%. (Beck reasons college-aged students are more often employed as servers themselves, making it more likely that they are familiar with tipping norms and they are able to commiserate with the server serving them).

[Editor’s Note: Portions of this article first appeared in print in Honors magazine, the newsletter for the MTSU Honor’s College.]