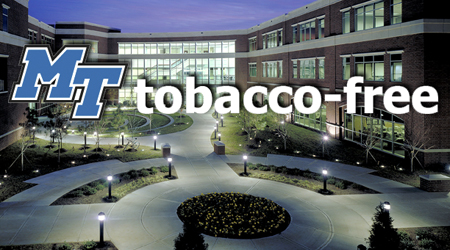 MTSU joined more than 400 colleges and universities across the nation on Jan. 1, 2012, when it became a tobacco-free campus.

MTSU has produced two videos about the change, including a brief informational spot featuring Lisa Schrader, director of health promotions for Student Health Services, and several University students and administrators.

For information about the new policy at a glance, as well as smoking-cessation resources and a note from MTSU President Sidney A. McPhee, visit www.mtsu.edu/tobaccofree/.