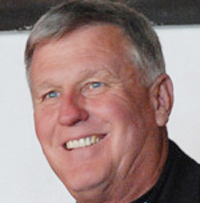 Former Major League pitcher Tommy John, who saved his career and revolutionized his sport by undergoing a groundbreaking operation, was the luncheon speaker at MTSU’s 2012 Baseball in Literature and Culture Conference March 30.

John had amassed a 13-3 record for the Los Angeles Dodgers by July 1974 when a ligament in his pitching elbow ruptured. In a three-hour operation in September 1974, Dodgers team surgeon Dr. Frank Jobe replaced the ligament in John’s left elbow with one taken from a tendon in the pitcher’s right wrist. The surgery had been performed previously on wrists and hands, but never on an elbow.

Following another procedure to reroute a nerve, John underwent 18 months of extensive rehabilitation and strengthening workouts. In the 1976 season, he posted a 10-10 record with a 3.09 earned run average, netting him the National League Comeback Player of the Year Award.

In a 26-season career with six different franchises, John posted 288 wins, 164 of them post-surgery, placing him seventh all-time among Major League southpaws. However, he is best known for what is now called “Tommy John surgery,” a procedure that has extended literally hundreds of athletes’ careers.

Gina Logue’s interview with Tommy John on “MTSU on the Record,” which aired on WMOT-FM on March 19, is available online via podcast. Listen to “The Surgically Altered Southpaw” by clicking here.

You also can watch John’s luncheon speech on video below.

Dr. Daniel Anderson delivered the keynote address, “Renaissance Men: Sportswriting, Popular Culture and Negro League Baseball.” A professor of literature, composition and American Studies at Dominican University in suburban Chicago, Anderson has published essays on sports in the work of W.E.B. DuBois and on intellectualism in the Negro Leagues.

Other topics discussed at the conference included “Traditional Fandoms in the Digital Age,” “The Colorful, Quirky Confines of Nashville’s Sulphur Dell,” “Hip-Hop, the Blogosphere and the Emergence of Baseball Poetry” and “The Cubs and Conservatism, or Why I Hate George Will.”

“The conference has really produced a lot of useful academic work, and it’s really great to see people use this venue as a way of producing viable baseball scholarship,” said Dr. Warren Tormey, an assistant professor of English at MTSU and organizer of the conference.

In fact, Tormey says, a volume of contributions by conference presenters, titled “Baseball and Class,” is due to be published in late spring or early summer.