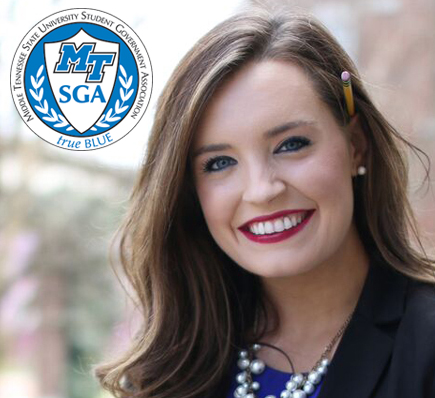 As MTSU students prepare to deal with sweeping changes universitywide, its new Student Government Association president is preparing to keep them in the loop.

Madison Tracy, a rising senior majoring in public relations, is primed to put her chosen field of study to use in bringing the student community and its representatives closer together.

“I eventually saw a disconnect between the students and SGA, and I realized while I was campaigning last year that a lot of students didn’t really know what SGA did,” said Tracy.

The Murfreesboro native and Buchanan Scholar in the University Honors College brings considerable experience to her new position. She was student body president at Central Magnet School for three years, and at MTSU, Tracy has served on the freshman council and as vice president of marketing for the executive board.

“With each different position, I kind of got to see every different area of the SGA, and I really liked how they reached out to students and how every area was important,” said Tracy.

To emphasize that message, Tracy created Facebook and Instagram pages titled “Humans of MTSU.” The social media pages, which emulate on blogger Brandon Stanton’s “Humans of New York” website, show various members of the MTSU community and enables them to tell their stories at www.facebook.com/humansofmtsu and www.instagram.com/humansofmtsu.

Tracy also is intent on helping students understand the ramifications of the Focus on College and University Success, or FOCUS Act, the next step in Tennessee Gov. Bill Haslam’s plan to see 55 percent of adult Tennesseans holding a postsecondary degree or certificate by 2025.

That plan involves a reorganization of higher education that will create independent governing boards for MTSU and other four-year institutions currently overseen by the Tennessee Board of Regents.

“With public relations and messaging, I want to bring that down to a very applicable, understandable thing for the students,” said Tracy, who is a member of MTSU’s FOCUS Act Transition Team.

Tracy said she also wants the students to understand MT Engage, the university’s blueprint for keeping students connected with the relevance of their classroom learning to their lives and careers.

The eldest of seven children, Tracy was homeschooled by her mother until the sixth grade, when she enrolled at Middle Tennessee Christian School.

Her mother is a substitute teacher at Northside Elementary School, and her father is a claims specialist in arbitration for State Farm Insurance.

“Because they believed in me and because they gave so much for us to go to college, I’m so thankful and just feel really blessed to have parents like that,” Tracy said.

MTSU senior Madison Tracy of Murfreesboro, the 2016-17 Student Government Association president, walks in the courtyard of the Paul W. Martin Sr. Honors Building in this May photo. Tracy also is a Buchanan Scholar at the university. (Photo by Sam Stockard)