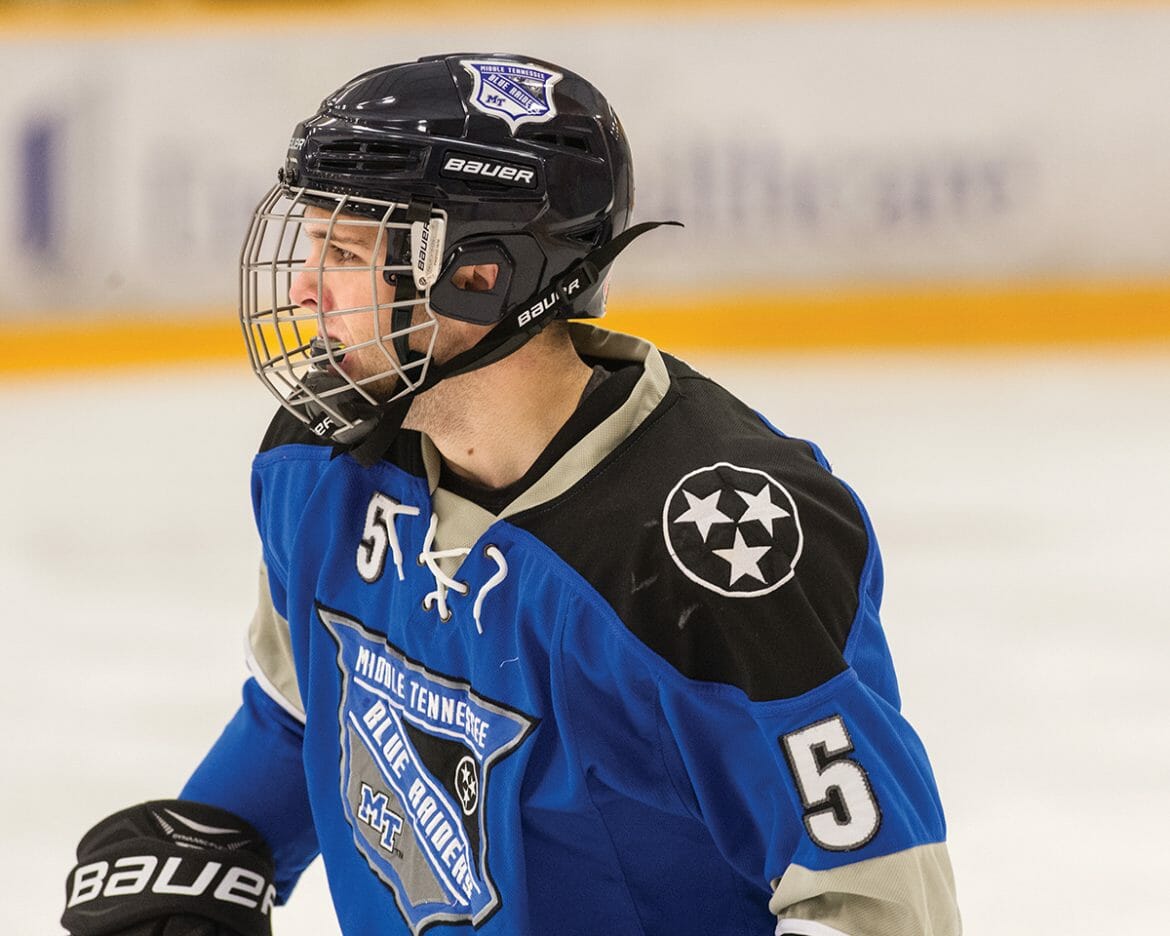 MTSU’s fledgling hockey club gets a boost from the success of its nearby fanged friends, the Nashville Predators

With an overtime game at LSU hanging in the balance, MTSU’s Jackson Graham delivered.

He carried the puck across the top of the faceoff circle, then whipped the game-winning shot high into the left corner of the net, giving the Blue Raiders a 4-3 victory last season.

MTSU’s players swarmed the ice surface in Baton Rouge, Louisiana, in celebration, marking another step forward for the club (non-varsity) team. The Blue Raiders would go on to finish the 2016–17 season with a record of 12 wins, eight losses, and one tie.

The Blue Raider Hockey club celebrates the winning goal during an Oct. 29, 2017 victory over the Tennessee Volunteers

Few people even realize that MTSU boasts a hockey club, much less that it travels to compete against Southeastern Conference universities like LSU. Perhaps greater success on the ice in the coming years will change all that.

There is certainly optimism that the Blue Raiders will improve again this season, which began in September and continues through early February. This is MTSU’s third season playing in the American Collegiate Hockey Association’s Division III.

“I’m excited, by all means,” Blue Raiders captain Zach Range said. “Seeing the steps we’ve been taking from year to year—just comparing the first games—has been phenomenal, to say the least.”

The current version of MTSU hockey actually represents the rebirth of a club sport that existed in the 2000s, but faded away due to a lack of participation around 2009. Two former MTSU players from more traditional hockey regions—Riley MacKenzie of Massachusetts and Jaylen Mitchell of Vancouver, British Columbia—are credited with pumping life back into the program.

“There’s a whole lot that goes into getting a club sport together, not to mention going the extra lengths of scheduling ice time and finding people in Murfreesboro that wanted to play hockey,” Range said. “Without those guys, there wouldn’t have been a team at all.”

MacKenzie, Mitchell, and Range did plenty of recruiting for the 2014–15 squad, the first to return to the ice. The Blue Raiders club played in a local men’s league that year, meaning the roster wasn’t limited to MTSU students.

“If you were hanging out at Centennial Sportsplex, A-Game, or Ford Ice Center,” Range said, “chances are you were going to hear from us about MTSU hockey.”

MTSU’s club became a member of the ACHA in 2015–16 and was placed in Division III, along with a number of other nontraditional hockey schools. ACHA rules restrict player participation to undergraduate students taking at least 12 credit hours or graduate students enrolled in 6 hours or more.

Also new in 2015–16 was the arrival of Jason Riherd as head coach. A middle Tennessee resident since 1993, Riherd helped restart Vanderbilt’s hockey club years ago and recently coached hockey at Blackman High School, where Range and a handful of other students played for him. The program’s restart experienced expected growing pains. MTSU won just one game in its inaugural ACHA season.

“A lot of times we were traveling for away games with just eight guys,” Riherd said. “It was a learning experience. I didn’t really get to do too much coaching. Guys would come off the ice and say, ‘Coach, what do you want me to do?’ And I’d say, ‘Catch your breath and go back out there.’ ”

But plenty of new players arrived for 2016–17 to help carry the Blue Raiders to a winning record. Highlights included Swedish native Niclas Lindstrom leading team scoring, MTSU playing a game in Bridgestone Arena against Lipscomb University, and the team winning in OT at LSU. Another batch of new recruits—coupled with the experience and leadership of returning players like Range, Wilson, and alternate captain Pete Ridley—should only continue the Blue Raiders’ climb this season.

“ People are definitely asking about the team more now because a lot more people are hockey fans now.”

Also boosting prospects for the MTSU hockey club going forward are some nearby fanged friends—the Nashville Predators pro hockey team. Everyone involved in the MTSU program agrees the club sport is clearly benefiting from the Preds reaching their first National Hockey League Stanley Cup Finals last spring. The exciting playoff run featured monstrous home crowds outside of Bridgestone Arena and drummed up all kinds of hockey interest in middle Tennessee and beyond.

“There’s definitely more interest,” said Nathanael Wilson, an MTSU defenseman and alternate captain. “I had to tell people we had a team last year, but this year they already know. People are definitely asking about the team more now because a lot more people are hockey fans now.”

Added Riherd: “When you fill an arena and have 100,000 more people outside watching on big screens, that tends to trickle down. The hockey interest is there. That’s why it’s so important for me this year to try to capitalize on it.”

Perhaps in its own small ways, MTSU’s program is exerting its own influence in the greater Nashville area as well. Former MTSU player Chris Weber now works at Ford Ice Center in Antioch, where he just happens to coach Riherd’s 5-year-old son.

“That’s a good example of why I do this,” Riherd said. “I know none of these guys is going to the NHL . . . so my job is for us to have a blast while we’re playing. It should be competitive, and it should be fun, and I want these guys to continue their love for the game and their education in the game.” MTSU

To read this and other stories from MTSU magazine click here!