Get your tickets for May 3 ‘True Blue Night&... 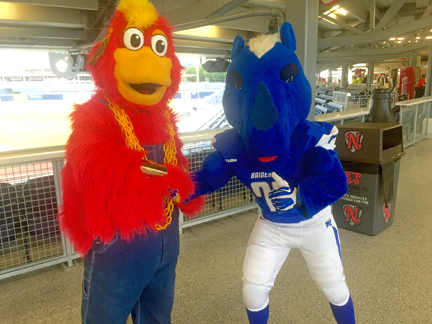 The Nashville Sounds will celebrate Middle Tennessee State University on Tuesday, May 3, with its second annual True Blue Night at First Tennessee Park.

The Sounds are offering MTSU students, faculty, alumni and supporters special discounted tickets with designated seating for the game. You can buy tickets for $8 a seat here through Monday, May 2, by using the promotional code “TRUEBLUE” when prompted.

“We thank the Nashville Sounds for providing this great opportunity for the MTSU community to celebrate our True Blue pride in coaches Insell and Davis – and see some baseball in a terrific park,” said MTSU President Sidney A. McPhee.

Davis and Insell will sign special posters at the game commemorating their Conference USA championship seasons. MTSU also will provide giveaways, and Lightning, the university’s mascot, will be on the field between innings.

The nationally recognized student group “Maybe April,” which includes MTSU’s Katy Bishop and Kristen Castro and their bandmate Alaina Stacy, will sing the National Anthem. The group was recently featured in Billboard Magazine as one of the industry’s “emerging female country trios.”

Get your tickets now!