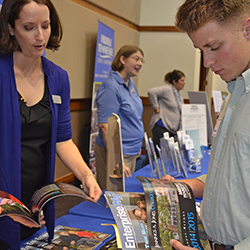 It came in the form of alumna Victoria Devon, who has made a fast rise in the broadcasting industry and is a multitalented morning show host, producer and video editor. Devon received her start in broadcast journalism in MTSU’s College of Media and Entertainment.

MTSU brought its True Blue Tour to Kentucky for the first time. University President Sidney A. McPhee, Vice President of Student Affairs Deb Sells, college advisers, academic staff and others met the prospective students — mostly from Bowling Green but one from two hours away in Danville, Kentucky — to share about the Murfreesboro, Tennessee, school’s variety of programs and the new Regional Scholars Program.

“It prepared me for the industry I’m in now,” Devon, 26, said of the hands-on broadcast journalism background she received from MTSU. “… When I stepped into the real world, I wasn’t shocked. Everything we had done at MTSU prepared me. I knew how to turn news packages in a timely fashion.”

Devon began working before graduation. She landed jobs at 102.5 The Game/ESPN Radio in Nashville. She pursued TMZ Sports and Fox Sports in Los Angeles before returning to Nashville to work for Scout.com and be a WSMV-TV Channel 4 producer. Her latest calling is with WNKY-TV, both a CBS and NBC affiliate, where she now hosts “SoKY Sunrise.”

The Franklin (Tennessee) High School graduate says MTSU’s $1.7 million mobile production truck and other technology advances during and since the time she attended are a bonus for students.

“Being able to see what MTSU offers — where they came from and where they are going — provides opportunities for students,” she said.

The program, offered to prospective students living within a 250-mile radius of MTSU’s campus, will bring a greatly reduced rate for out of state tuition for those who meet the academic requirements and apply by Dec. 1. To learn more, visit http://www.mtsu.edu/financial-aid/scholarships/regional-scholars.php.

“Ultimately, that is her decision (where to attend college), but it takes our decision up a notch,” said Ramona Karsner, emphasizing her daughter’s college major (education), cost and “if it’s a good fit” as factors into the decision. “She’s adaptable, a leader.”

Should Madison Karsner, a Boyle County High School senior, land a job teaching after graduating from college, she will become the 41st member of her family to work in education. Her father, Steve Karsner, is principal at Boyle County Middle School; her mother is an assistant principal at the Kentucky School for the Deaf in Danville.

Western Kentucky University senior Susan Mathis, 22, of Brentwood, Tennessee, attended because she plans to transfer to MTSU in January. She will major in advertising and minor in graphic design.

The 2011 Brentwood High School graduate commutes to WKU from her home.

“I love Western, but it will be more convenient for me (to transfer),” she said.

The 10th stop on the True Blue Tour will be Thursday, Nov. 19, at the Marriott Franklin Cool Springs, 700 Cool Springs Blvd., in Franklin. To register for any MTSU Admissions events, go to www.mtsu.edu/rsvp.

The expanded MTSU True Blue Tour has added a 10th stop — Williamson County — in the midst of a busy season to recruit prospective students.

At each event, MTSU holds an 11:30 a.m. luncheon to court high school counselors and community college staff and a 6-8 p.m. reception for students and their families.

To register for any MTSU Admissions events, go to www.mtsu.edu/rsvp. Walkups are welcome. All high school and community college students and families are welcome.

It is the first time MTSU will take the tour to Williamson County, which had approximately 2,200 students graduate from nine public and 10 private high schools in May.

“We are excited about this opportunity to bring MTSU to Williamson County and visit with students, their parents and area counselors,” McPhee added.

The MTSU president said he would like to see Williamson County’s influx of first-time freshmen admitted to MTSU grow to 500-600 students in the coming years.

The True Blue Tour already has made stops in Johnson City, Knoxville, Chattanooga and Nashville in Tennessee, and Atlanta in Georgia, which marked the first time MTSU has taken the tour out of state.

McPhee said plans are in place for MTSU to entertain principals from all of Williamson County’s high schools in December. He wants them to visit the University Honors College and Science Building, learn about the phenomenal growth of mechatronics engineering and see the variety of more than 140 programs.

NASHVILLE — A large turnout of prospective MTSU students and their families made for a successful True Blue Tour stop in Nashville Thursday, Oct. 22.

MTSU admissions recruiter Ashley Murray, right, answers a question from Valerie Delorme, center left, as daughter Ella and husband David Delorme of Columbia, Tennessee, observe. Ella Delorme, 16, who was home-schooled by her mother, is a junior who is a part of the Comenius School Franklin umbrella. She plans to graduate in May 2016 and earned a $750 MTSU scholarship presented by Provost Brad Bartel. (MTSU photos by Randy Weiler)

The Murfreesboro university goes on the road as deans, academic staff, Provost Brad Bartel, Student Affairs Vice President Deb Sells and President Sidney A. McPhee share all that MTSU has to offer with a variety of more than 150 programs.

The College of Basic and Applied Sciences now offers world-class research and learning opportunities in the $147 million Science Building that opened last fall as $20 million in renovations continue at existing facilities.

The university continues to build on its founding as a teaching college with a state-of-the-art College of Education building; and promoting student success remains at the forefront with a Student Union and Student Services and Admissions Center buildings opening in recent years.

“All of the deans, academic advisers and faculty were very helpful,” said Delorme, who is home-schooled by her mother and carries a 4.0 GPA. “All of the questions I had about my application were answered. I’m very excited to attend MTSU. I have visited campus and found it amazing.”

“It is phenomenal,” she said of the Science Building. Although a junior, Ella Delorme said she plans to graduate in May 2016, major in chemistry with a focus in molecular biology and be a part of the Honors College.

Delorme earned a $750 scholarship in a drawing during the event.

MTSU College of Media and Entertainment Dean Ken Paulson, left, and Center for Innovation in Media Director Val Hoeppner listen as Teriyana Scales talks about her future college aspirations as her grandfather, Cecil Ramsey observes. They visited Oct. 22 during the annual True Blue Tour at the Renaissance Nashville Hotel. Scales, 19, is a sophomore at Nashville State Community College and wants to study journalism.

MTSU President Sidney A. McPhee, left, and Melissa Duff, executive director of the Walters State Community College Student Success Center, discuss the dual admissions agreement between the two schools announced Oct. 20 during the MTSU True Blue Tour stop at The Foundry on the Fair Site in Knoxville. The agreement helps ease the transition for students to transfer from Walters State to MTSU. (MTSU photos by Randy Weiler)

The agreement occurred at the The Foundry on the Fair Site, where the fourth leg of MTSU’s nine-city True Blue Tour was held later featuring a reception for prospective students and their guests and luncheon for area high school counselors and community college staff.

The agreement helps establish programs to promote successful experiences for students wanting to complete a degree. Walters State students can now interact with MTSU advisers and have access to faculty and programs within their proposed majors. Students completing an associate degree will be granted access to register early for university classes.

“MTSU and Walters State strive for our students to succeed and this partnership provides another element to enable more Tennessee residents to graduate from college, fully supporting the state’s objective to produce a more educated workforce,” McPhee said. “This agreement allows for an easier transition from Walters State’s campuses to our campus in Murfreesboro.”

“This agreement offers our students the chance to get on a guaranteed track to earn a bachelor’s degree while still at Walters State,” said McCamey.

“We are eager to work with MTSU to make the transition process as easy as possible for our students,” he added.

Gibbs High School counselor Marissa Buchanan, right, reacts after winning both a gift bag from Middle Tennessee State University President Sidney A. McPhee and a book about his Chinese travels. It occurred during the annual MTSU True Blue Tour visit to Knoxville. As a way to recruit prospective students, MTSU holds a student reception and luncheon for counselors and community college staff at The Foundry on the Fair Site.

A student completing MTSU courses can transfer those credits back to Walters State to help meet requirements for an associate degree. To learn more, students should email transfer@mtsu.edu or visit www.mtsu.edu/apply.

MTSU, the largest and oldest institution in the Tennessee Board of Regents system, recently established a dual admissions agreement with Cleveland State Community College and in 2014 with Northeast State.

Walters State is a TBR community college offering more than 100 associate degrees and technical certificates. It is considered one of the leading tech-savvy colleges in the country and is an Apple Program of Distinction.

The college serves 10 East Tennessee counties with campuses in Morristown, Greeneville and Tazewell. About half of Walters State students plan to transfer to complete a four-year degree. The other half complete associate of applied science degrees or technical certificates to enter the workforce immediately. To learn more about the college, visit www.ws.edu.