One prospective MTSU student with aspirations to be an anesthesiologist likes the university’s special partnership with Meharry Medical College.

Another student ranks MTSU as her “top choice” because of an outstanding aviation program. And a third young woman, who fell in love with the university as a child, likes the affordability, scholarship opportunities and not having to travel far to attend college. 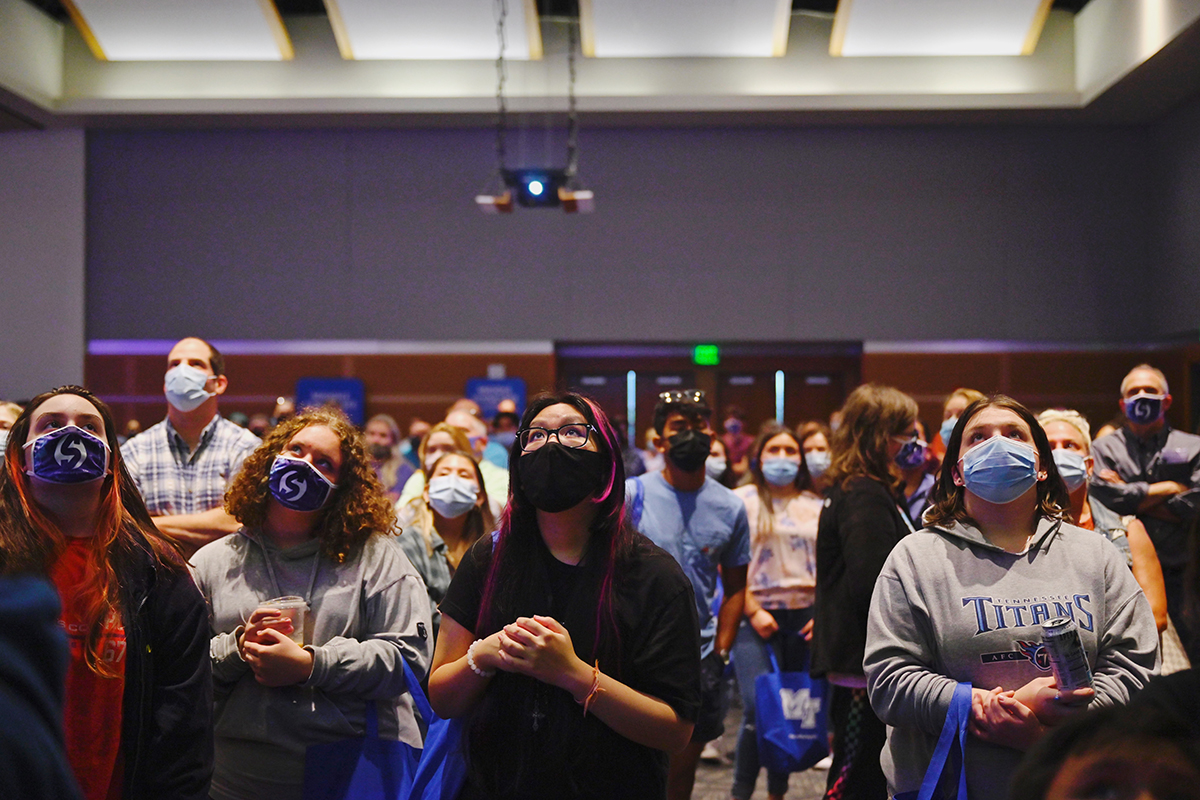 Prospective MTSU students and their parents watch a video during the kickoff event for the True Blue Tour recently in the Student Union Ballroom on campus. Campus officials visit 14 cities in four states during the fall recruiting season. (MTSU photo by Cat Curtis Murphy)

The trio joined dozens more in the kickoff to the 2021 MTSU True Blue Tour recently in the Student Union Ballroom on campus.

MTSU opened its doors for students from Murfreesboro, Rutherford County and the surrounding area for the first stop on the 14-city tour across Tennessee as well as pending visits to Birmingham and Huntsville, Alabama; Atlanta, Georgia; and a tour-ending visit to Louisville and Lexington, Kentucky, in November.

MTSU officials are emphasizing the importance of applying by the Dec. 1 deadline to receive a guaranteed scholarship for qualifying students.

Shekinah Pobi, 17, lives in Smyrna, Tennessee, with her parents Samuel and Deborah Pobi, attends Central Magnet School in Murfreesboro just down East Main Street from the university and plans to pursue a pre-med path for a career as an anesthesiologist.

The Medical School Early Acceptance Program — an MTSU College of Basic and Applied Sciences-Meharry Medical College School of Medicine partnership — appeals to Pobi, who likes “the reduced time to become an anesthesiologist,” she said.

“The main consensus among my friends interested in medicine is that the length of time it takes isn’t worth it,” Pobi said. “Of course, you would want your doctor to be highly educated, but many believe their life won’t start until they are out of school. They don’t want to spend another 10 to 12 years in school. … The Meharry program would accelerate the time in school while also insuring I gain the necessary education to become a good doctor.”

Somewhat familiar with campus — having been a part of a True Blue 100 cohort of academically promising high school underclassmen three years ago — Pobi said the campus “looks nice from what I’ve seen so far.” She maintains a 4.0 GPA and hopes to increase her ACT from 27 to 30.

An interest in aviation

With a strong interest in aviation and aerospace engineering and pursuing a minor in education, Ireland MacMullen of Mt. Juliet, Tennessee, is more than interested — “I’d say MTSU probably is my top choice,” the 18-year-old Green Hill High School senior said.

“It’s close to home and in-state,” she added. “They have one of the best aerospace programs in the country and a lot of my friends are considering coming here, too.” MacMullen is working to increase her ACT to 30 or higher and she has a weighted 4.38 GPA. She may look into the U.S. Air Force or U.S. Navy “for what I want to be doing (later).”

A brief visit with Vincent Windrow, associate vice provost for Student Success, had MacMullen collecting this advice: “Don’t be afraid of tutoring … and make sure you take advantage of all the resources,” he said. 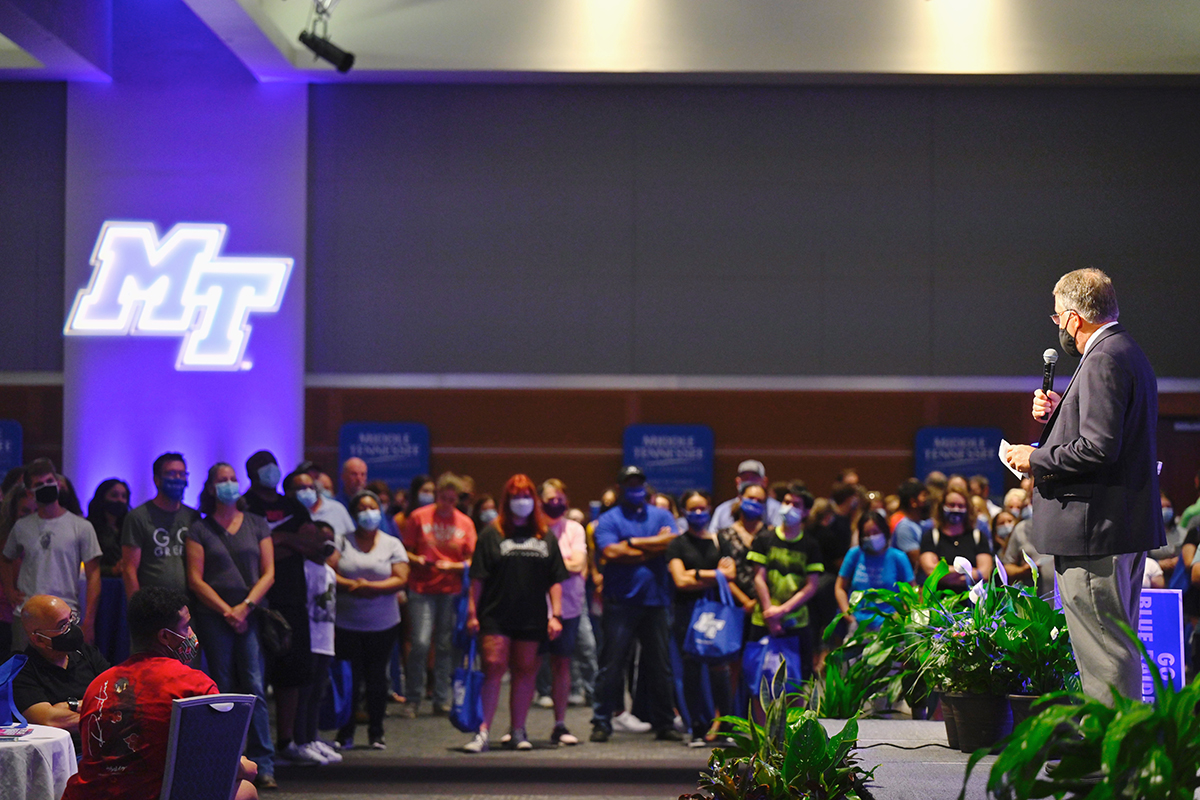 A large turnout of prospective students and their family members listen as MTSU Provost Mark Byrnes shares about university resources available to them as MTSU students during the recent kickoff for the 14-city True Blue Tour in Murfreesboro in the MTSU Student Union Ballroom. University officials travel across the state and to cities in Georgia, Alabama and Kentucky. (MTSU photo by Cat Curtis Murphy)

Growing up a Blue Raider

Shank, 17, an Oakland High School senior, wants to study marketing with an emphasis in advertising.

“I don’t have to worry about being several hours away, there’s lots of scholarship opportunities and it’s more affordable than others schools,” said Shank. “It’s nice to know it’s nationally recognized and, at the end of the day, we are all here to learn.” 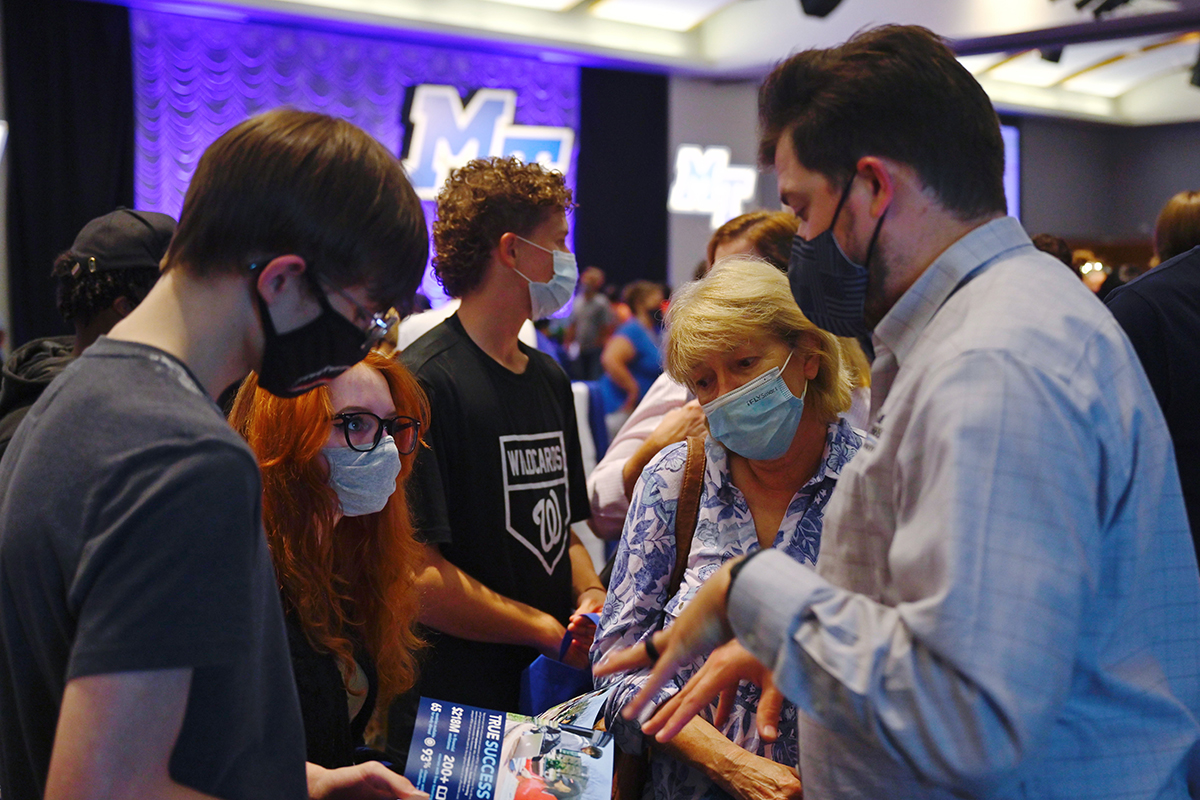 An MTSU adviser assists prospective students by providing information and answering their questions during the Murfreesboro/Rutherford County True Blue Tour event recently in the MTSU Student Union Ballroom. It marked the kickoff of the tour and fall recruiting season, as MTSU will travel across Tennessee and to Georgia, Alabama and Kentucky to showcase quality programs. (MTSU photo by Cat Curtis Murphy)

MTSU has two scheduled in-person True Blue Preview Saturday events — Sept. 25 and Nov. 6. On the RSVP for Special Events page, click the date you plan to attend. Prospective students can enjoy the full campus experience. Visitors can participate in academic and department presentations, obtain financial aid and scholarship information and pick from a variety of special interest sessions. 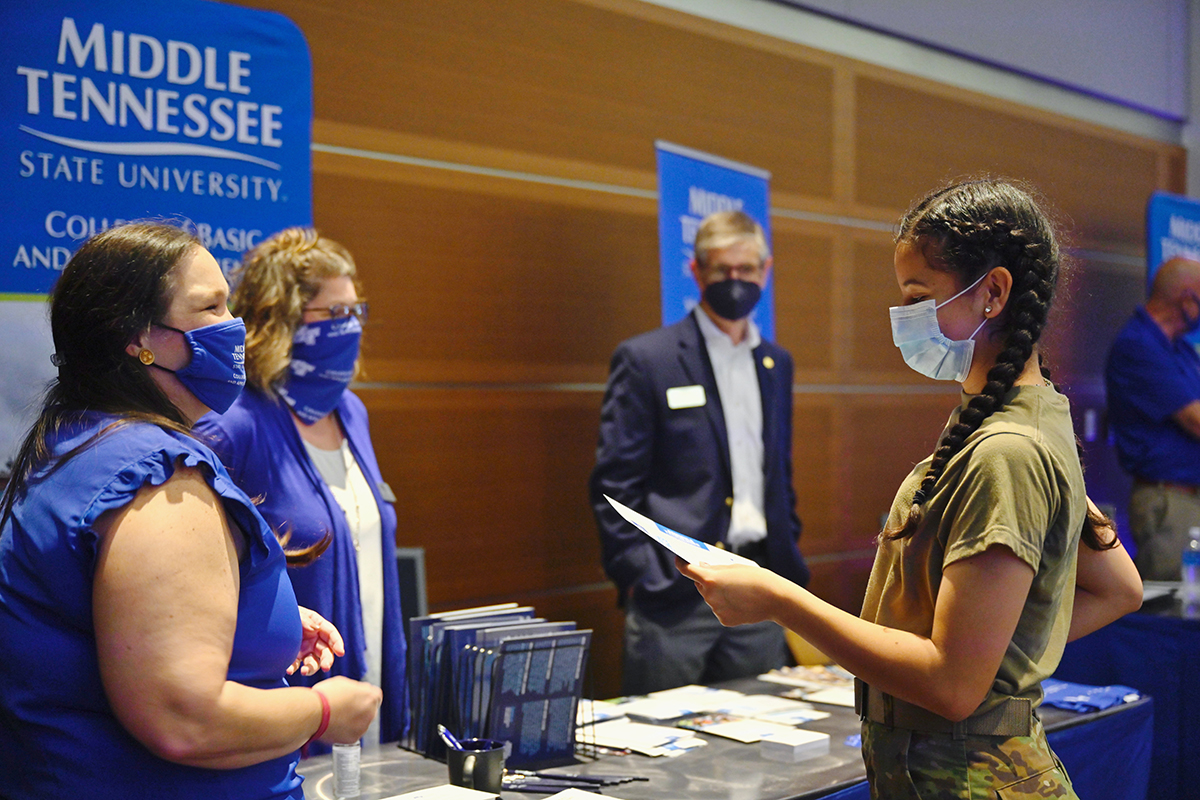 A prospective MTSU student gathers information about the College of Basic and Applied Sciences table during the recent True Blue Tour event for Murfreesboro, Rutherford County and the surrounding area. The event, held in the Student Union Ballroom, was the kickoff for the 14-city True Blue Tour across Tennessee and three other states. (MTSU photo by Cat Curtis Murphy) 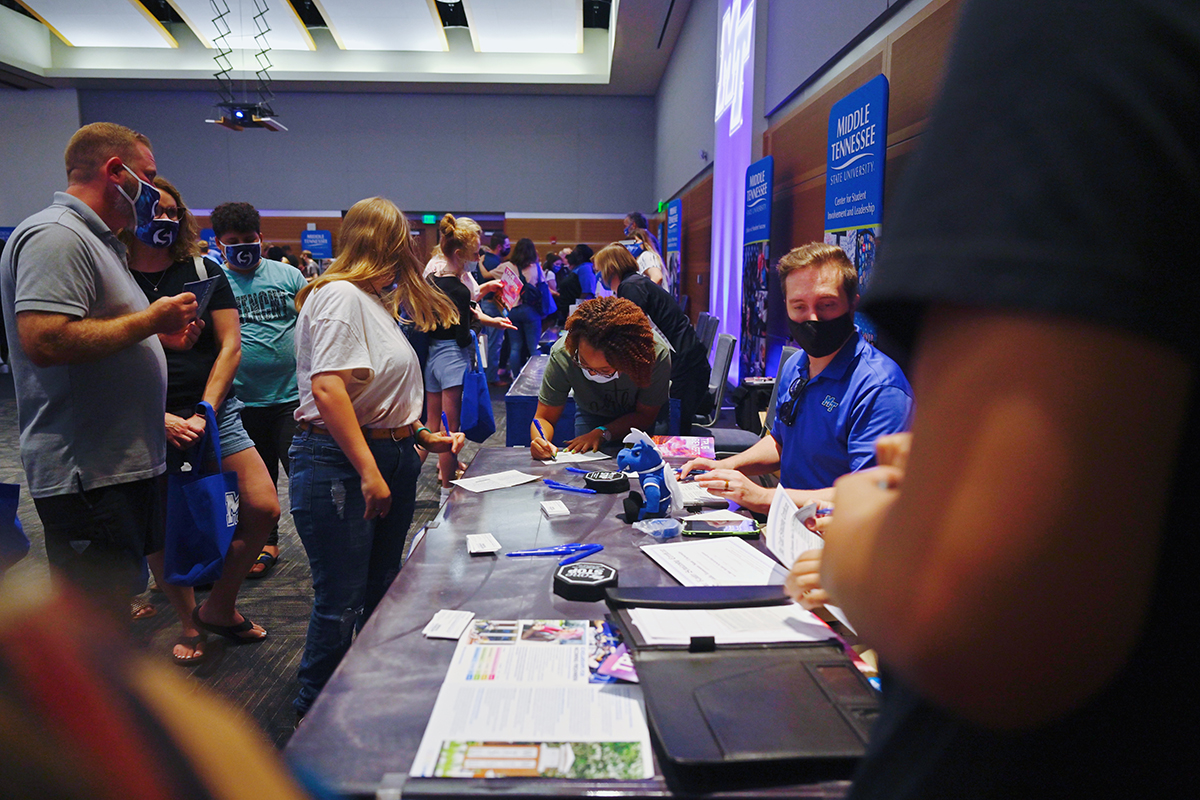