MTSU appoints Arik as Chair of..

CLARKSVILLE, Tenn. — Robert Elston, a friend and Northwest High School classmate of Kalista Ogilvie, introduced her to Middle Tennessee State University. On her own through research, Ogilvie discovered the university’s horse science and theater and arts programs.

Ogilvie and her family don’t own horses or live on a farm. However, horses and caring for them and theater and arts are passions for the 17-year-old, who has been doing dual enrollment with another university and volunteering four years in the horse barn at Girl Scout Camp Sycamore Hills near Ashland City, Tennessee. With MTSU, her dreams potentially can be realized. 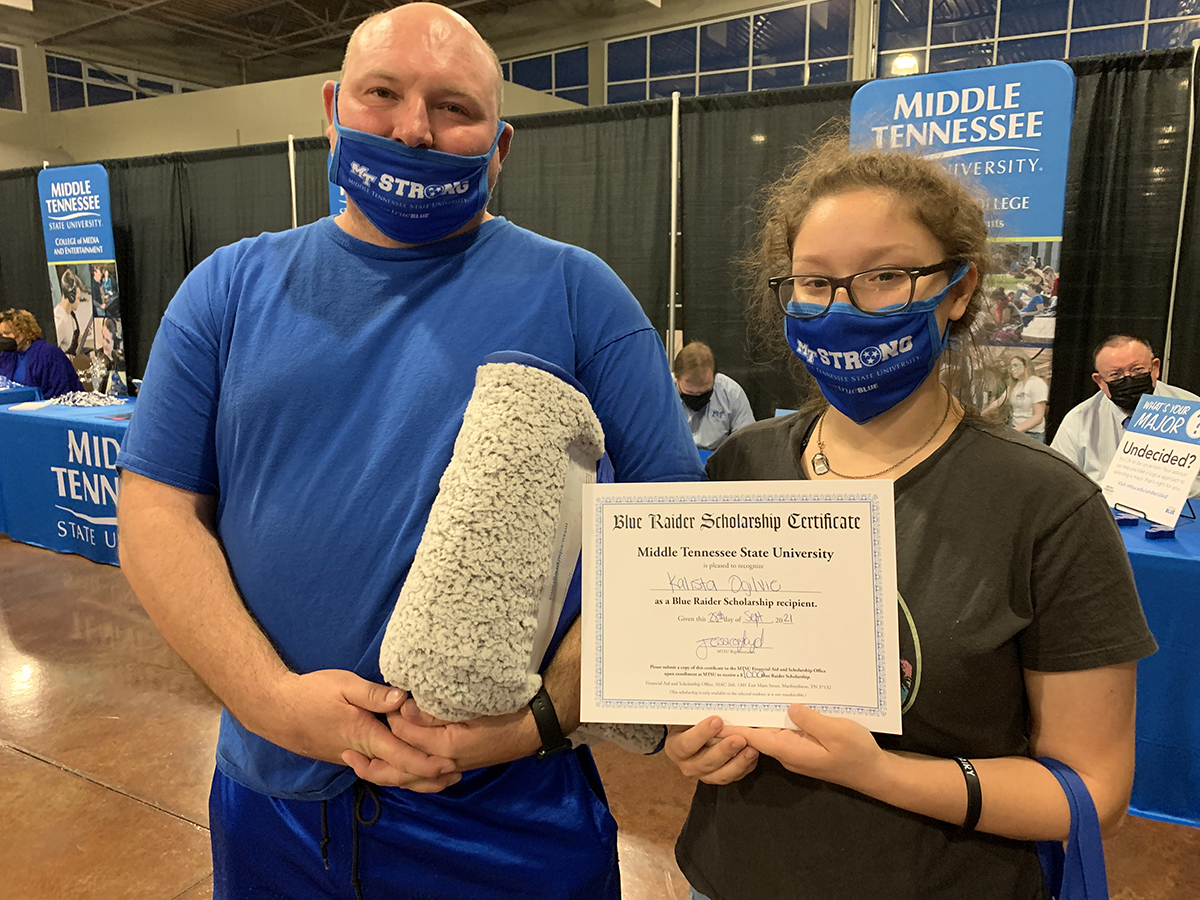 Ogilvie and Elston, who said aerospace and physics are his main MTSU interests, were among Clarksville-area students attending the MTSU True Blue Tour event at the Wilma Rudolph Event Center Tuesday, Sept. 28.

Clarksville is the fourth of 14 tour stops that include eight cities in Tennessee, plus traveling to Atlanta, Georgia, and Louisville and Lexington, Kentucky. Last week, MTSU staff and administrators visited Birmingham and Huntsville, Alabama. Masks are required as a COVID-19 protocol, Admissions officials said.

Led by President Sidney A. McPhee, Provost Mark Byrnes, deans and Deb Sells, vice president of Student Affairs, MTSU hits the road to recruit prospective high school and transfer students. The students and their families learn about MTSU’s many programs, scholarships and financial aid, housing, the Honors College and much more.

“Originally, I didn’t know about MTSU,” Ogilvie said. “Robert introduced me to MTSU. I told my mom (Denise Sims), ‘I have to go there.’” On Tuesday, she told her stepfather, Anthony Sims, that the MTSU event was taking place “and I have to be here. Nothing is stopping me.” He brought her. 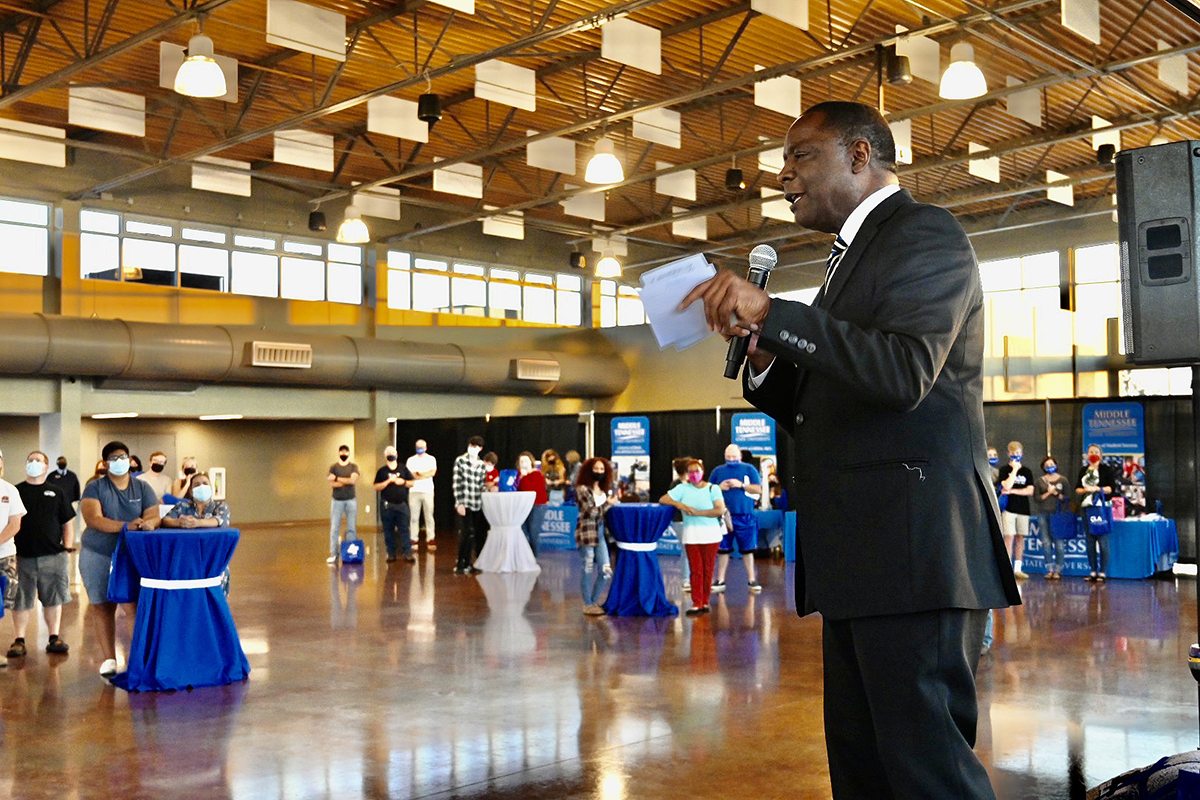 Preston Vandenbroek, 17, a Rossview High senior attending with parents Heather and Andrew Vandenbroek, has an interest in the School of Concrete and Construction Management. … Joined by mom Karissa Poe, Analiese Poe, 15, a Northwest sophomore and MTSU True Blue 100 member as a freshman, is considering biology or biochemistry. … Northeast senior Maria Nash, 17, plans to visit Saturday, Nov. 6, for the True Blue Preview and is pondering psychology in the College of Behavioral and Health Sciences. … Montgomery Central senior Jacob Gould, 17, who won a $5,000 scholarship, admitted he is “exploring my options” for his major. … Taylor Ingram, 17, a Montgomery Central senior interested in business or nursing and dual enrollment at APSU, won a $2,500 scholarship as did Nash.

Retired educator and MTSU Alumni Board member Brenda Graham, who taught for 40 years (37½ with military children at nearby Fort Campbell), spoke briefly. The alumna, a Clarksville resident and Lynchburg, Tennessee, native earned her bachelor’s degree in education in 1973 and her master’s in administrative supervision in ’76. She told the audience “MTSU is a fantastic place … and take it (considering MTSU) seriously.”

In the same vein, alum and Legends Bank President Tommy Bates (Classes of ’85 and ’92) urged the audience “to take a tour, go to a ball game and see the beautiful campus.” He met wife Debbie (’86) there. Their son, Kyle Bates (’15), an electronic media production graduate in the College of Media and Entertainment, has traveled with artists Shawn Mendes, The Chainsmokers, Little Big Town and others. 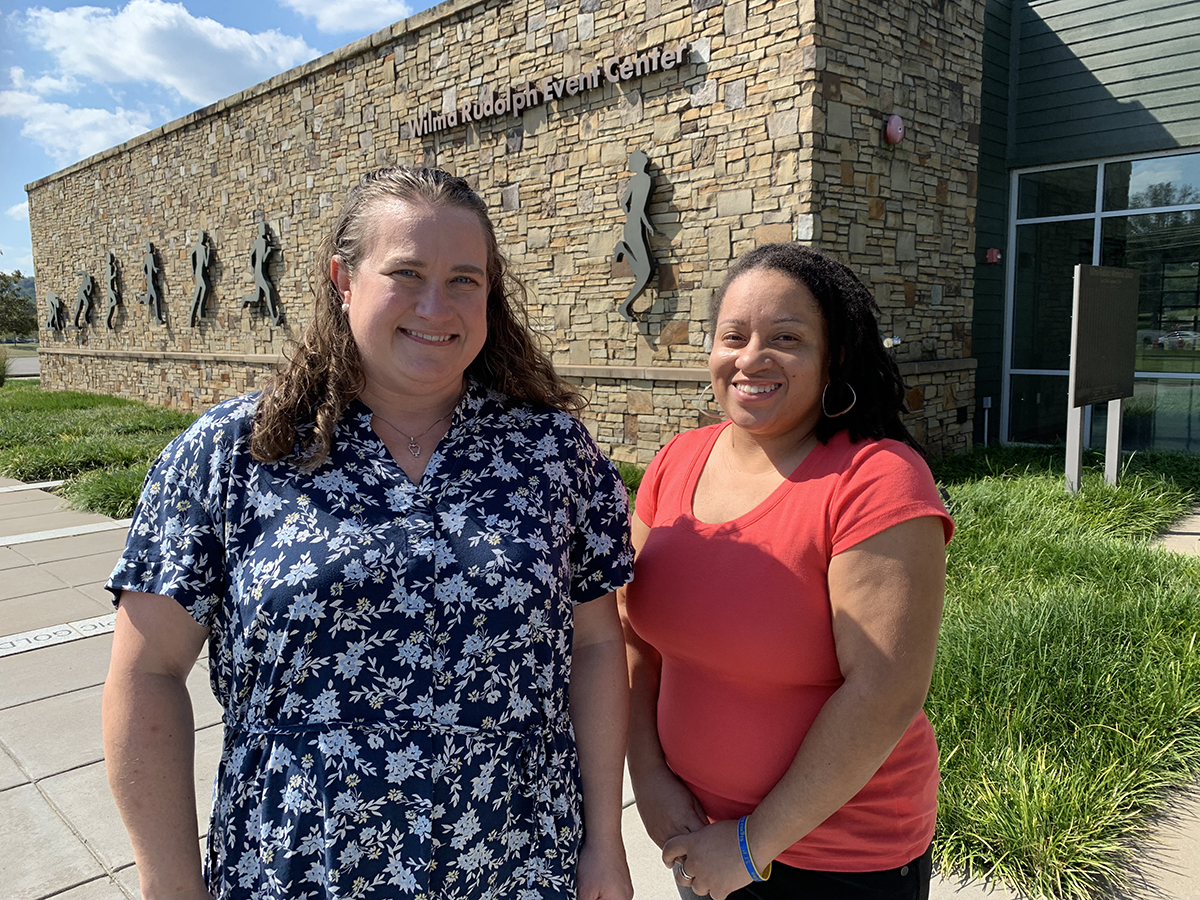 Cheyandra Rogers, left, a college and career adviser for the Tennessee Higher Education Commission’s Advise TN and based at Kenwood High School in Clarksville, Tenn., and junior/senior college and career counselor Heather Mendoza with Middle College in Clarksville shared how MTSU’s variety of programs and opportunities make a difference with their students. During the True Blue Tour luncheon Sept. 28 at the Wilma Rudolph Event Center, Mendoza learned she can bring up to 40 students to Murfreesboro for an all-expenses-paid campus visit. (MTSU photo by Randy Weiler)

Counselors can guide the way

Junior/senior college and career counselor Heather Mendoza with Middle College in Clarksville told McPhee that MTSU’s academic options offer “a great opportunity for our students and can make a difference for them during the luncheon for counselors and community college staff.

“You can get all of your questions answered, it’s a very affordable option, all of the travel (education abroad) experiences and all of the academic programs.” McPhee gave Mendoza and the other counselors $1,500 scholarships for their students.

Thanks to money available in Sells’ budget, Cheyandra Rogers, a college and career adviser for the Tennessee Higher Education Commission’s Advise TN and based at Kenwood High School, received an opportunity to bring 40 students by bus to Murfreesboro to visit campus.

“This is going to mean so much for our students. It’s pretty amazing,” said Rogers, a 2009 Kenwood graduate who added that many students come from low- and middle-income backgrounds. “To bring something like this ($1,500 scholarship and free campus tour for up to 40 students), I feel like I won the lottery.”

On deck: Franklin and Nashville 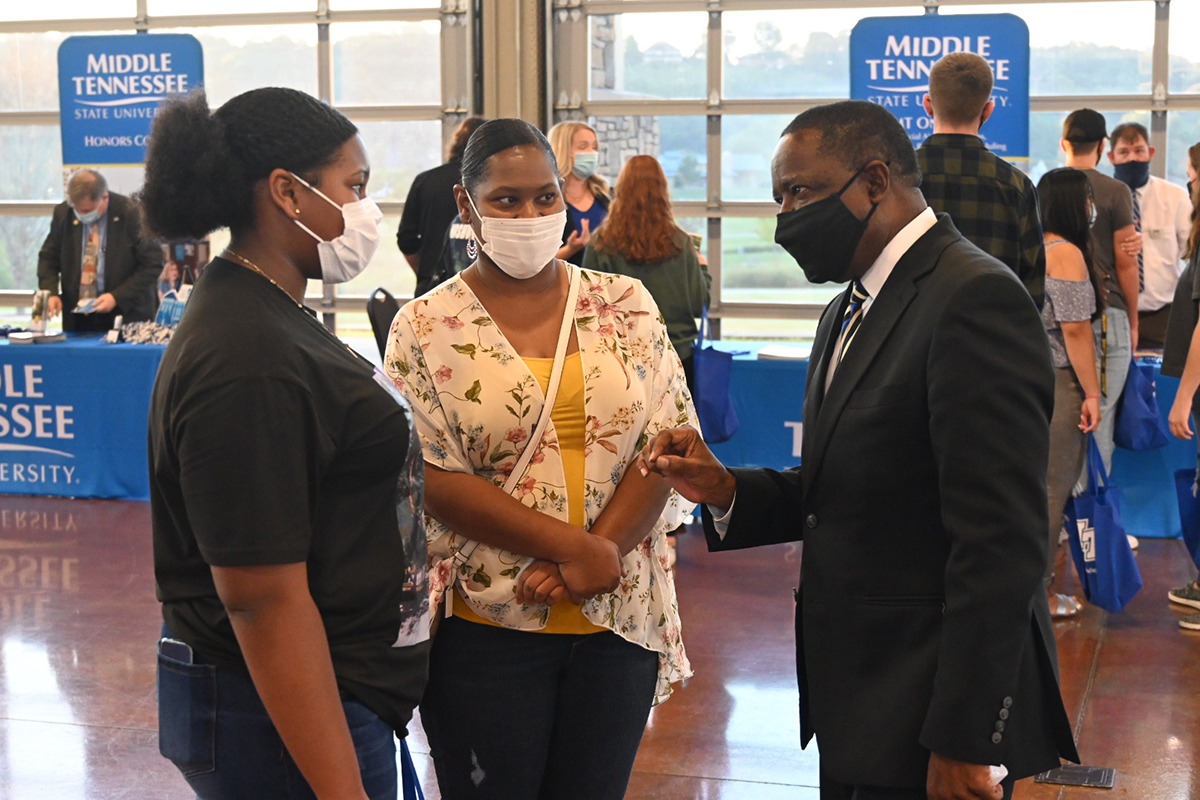 MTSU President Sidney A. McPhee, right, learns that Analiese Poe, a sophomore at Northwest High School in Clarksville, Tenn., was among the True Blue 100 as a freshman. Poe, 15, attended the True Blue Tour event with her mother, Karissa Poe, Tuesday, Sept. 28, at the Wilma Rudolph Event Center. Analiese Poe has academic interests in biology and biochemistry. (MTSU photo by Andrew Oppmann)