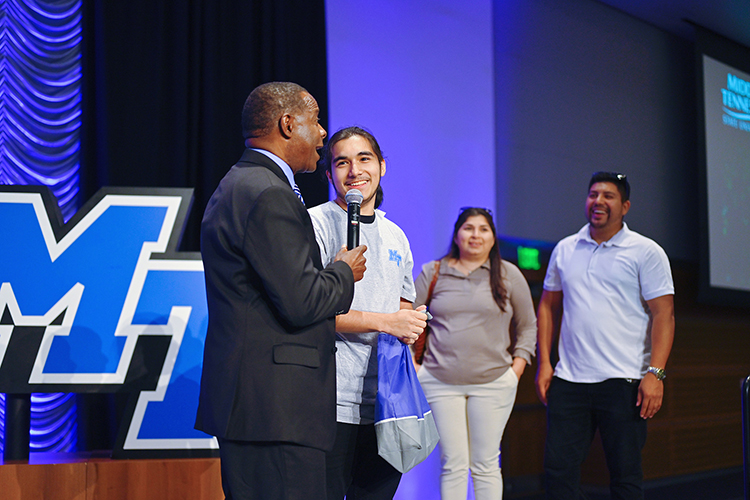 Prospective MTSU students arrived full of passion to learn about the university’s programs, scholarships and community at the kickoff of the 2022 True Blue Tour at the Student Union Building on Wednesday night.

The event — the first of 14 tour stops across the state and Alabama, Georgia and Kentucky throughout the fall semester — welcomed Murfreesboro and the wider Rutherford County community to campus to meet with academic leadership, hear from University President Sidney A. McPhee and even have the chance to win scholarships.

“We want you at MTSU!” McPhee said emphatically to the sea of prospective students and their families, capping off a speech highlighting the university’s first-rate academics, affordability and small community feel.

The tour features McPhee and Deb Sells, vice president of Students Affairs and vice provost for Enrollment and Academic Services, who lead the team that includes staff, deans and other administrators, plus representatives from more than 20 departments prepared to answer questions and provide information for guests.

Originally from Venezuela, Henry Bello, 17, a LaVergne, Tennessee, high school student and resident, was in disbelief when McPhee drew his name for a $22,000 scholarship, moving a hand to his heart. He was among several lucky prospective students in attendance whose names were drawn by McPhee for scholarships of various amounts.

“It honestly took me a few seconds to process it because I thought it was a one in a million chance,” Bello said. “I thought ‘It’s not going to be me.’… I was shocked at how God helped me get to where I am right now.”

Bello wants to pursue a degree in computer science and told McPhee he had already visited MTSU three times.

“I generally want to study programming,” he said. “(But) I want to be a lot of things. I want to be kind of like a ‘jack-of-all-trades” and believe in having many skills.”

Avery Perry, a 16-year-old Rutherford County Virtual School junior who lives in Murfreesboro, Tennessee, attended with his mom, Linda Perry, to find out about scholarship opportunities and program options for his interest in computer hardware development.

“I want to learn how to build computers,” he said.

“He’s (already) made some small modifications to his own computer at his own risk,” his mom said, “which have worked out well.”

Justin Adams, a 16-year-old senior at Blackman High School in Murfreesboro, had a chance to speak with Greg Van Patten, dean of the College of Basic and Applied Sciences.

The Adams family recently relocated from Michigan to Middle Tennessee for “better opportunities,” Justin said, adding he wants to pursue a degree in computer engineering technology.

For 16-year-old Oakland High School senior Sami Albakry, MTSU has always been a part of his life.

“Both of my parents work here (at MTSU). … They’ve been working here as long as I’ve been alive,” Albakry said.

A Murfreesboro native, Albakry is interested in pursuing a degree in business, a desire which grew when he took an MTSU dual enrollment course this summer.

“I liked it. It was macroeconomics. It kind of piqued my interest, and that’s been what I’ve been looking at for the past year.”

Taylor Letart, 17, plays soccer as a senior at Rockvale High School in Rockvale, Tennessee, and wants to follow in her mother and brother’s True Blue footsteps.

Her mother, April Letart, recently returned to her alma mater to attend graduate school, and her brother is a senior psychology major.

From observing her family’s Blue Raider experiences, Letart is especially attracted to the ability to have a flexible schedule.

“My mom managed it (school) while raising her kids. She was getting a good education with such a flexible schedule,” she said. “(And) I really want to be a neonatal nurse. I love babies.”

The night ended on a high note when McPhee drew Letart’s name for a second $22,000 scholarship, and neither mother nor daughter knew about the drawing before attending.

“I was so nervous (during the drawing,)” Taylor Letart said. “Thinking like, literally, ‘It could be anybody in the room right now.’”

Jonathan Eskobar, 16, was another Rockvale High senior and lucky scholarship winner landing $15,000 at the event.

A first-generation college student, Eskobar was accompanied by his parents, Saulramos and Maria Eskobar, and wants to further his education in part to inspire his siblings.

“I am trying to set an example for my sisters because they’re not much younger,” he said.

He has been interested in MTSU since his junior year because of its location, great reviews, scholarship opportunities and an excellent program for prospective pre-law students.

“I can take my American Bar Association exam here, so I can immediately go into law school upon graduation,” he said.

The next True Blue Tour student reception stop is in Clarksville, Tennessee, at the Wilma Rudolph Event Center on Sept. 28. To RSVP for the next event or any of the future stops, visit the “RSVP for Special Events” webpage at https://www.mtsu.edu/rsvp.