'Manufacture This': Listen to .. 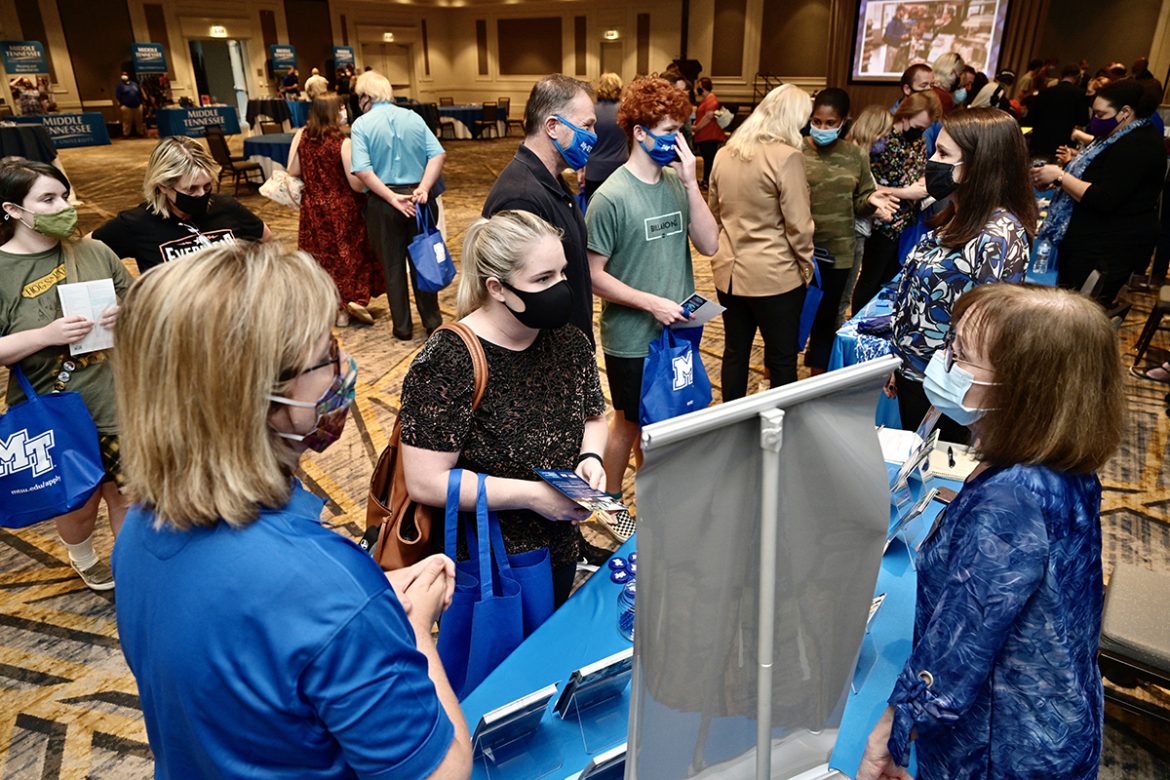 NASHVILLE and FRANKLIN, Tenn. — Cody Wilson served six years in the military, honorably leaving the U.S. Army as a specialist E-4. In January 2020, he began attending Nashville State Community College on path to earn an associate degree and then pursue business at a university.

A $5,000 scholarship Wilson received from MTSU during the annual True Blue Tour at Nashville’s Millennium Maxwell House will be a financial bonus when he pursues business administration in the Jones College of  Business. 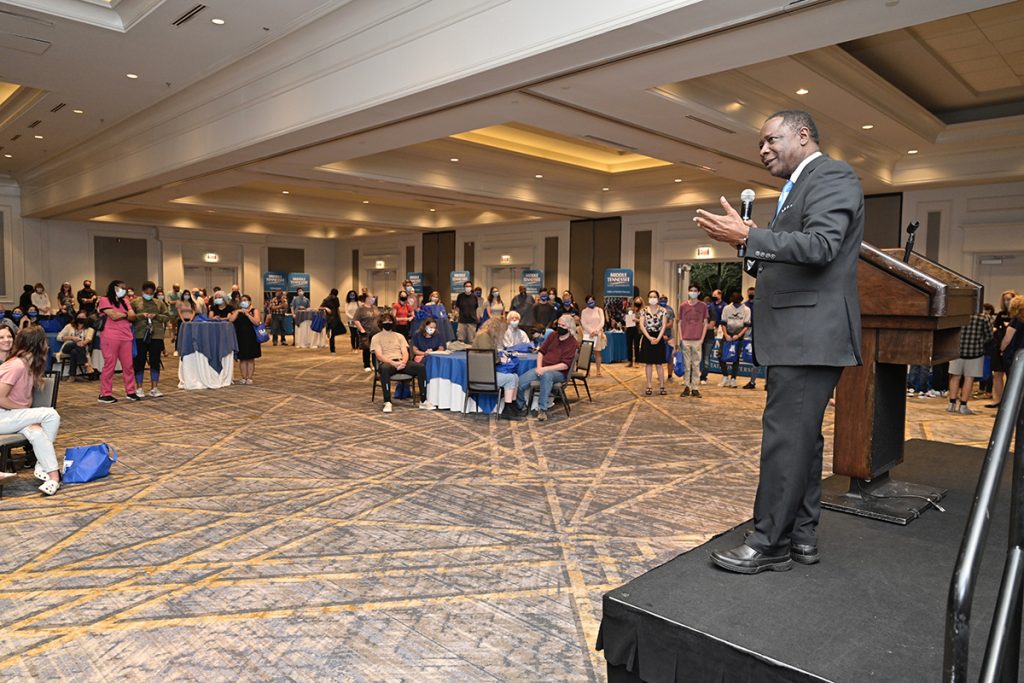 This week, MTSU visited Nashville and Franklin, recruiting prospective new and transfer students for 2022 and beyond. They were the fifth and sixth stops on the tour as the university travels across Tennessee and to five major cities out of state to share what MTSU offers in terms of academic programs, financial aid, housing and much more.

Wilson, 30, attending with girlfriend Jennifer Ruggirello, said the scholarship “means a lot. I was happy when they called my name.” He plans to enroll at MTSU in January.

University officials informed Wilson about the Charlie and Hazel Daniels Veterans and Military Family Center, a one-stop shop of resources and support for 1,100 student veterans and family members on campus. 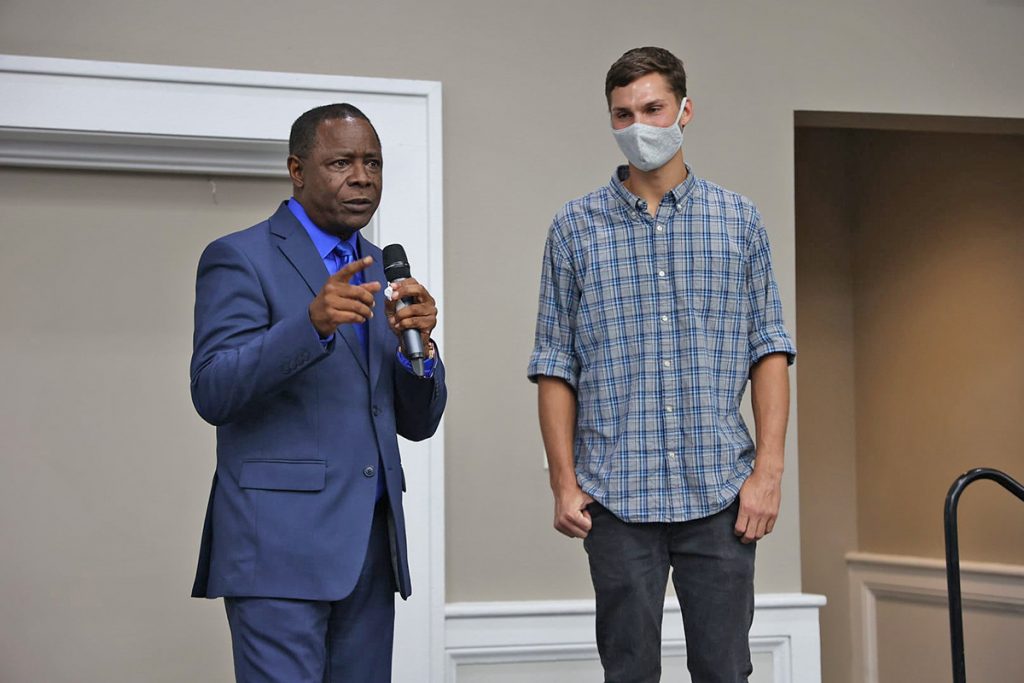 MTSU President Sidney A. McPhee, left, tells the audience attending the True Blue Tour event at the Millennium Maxwell House that U.S. Army veteran Cody Wilson will have opportunities to be assisted by the Charlie and Hazel Daniels Veterans and Military Family Center on campus. Wilson received a $5,000 scholarship and plans to study business administration in the Jones College of Business. Dozens of students and their parents attended the two-hour event. (MTSU photo by John Goodwin)

Katherine Malpas of Thompson’s Station, a sophomore at Columbia State, has a high interest in MTSU’s exercise science, food and nutrition and horse science programs.

“I’m still deciding (where to go),” said Malpas, who attended the Franklin event at the Marriott Cool Springs with her parents, Jim and Karan Malpas, and who visited campus this summer. “I love the campus and love the atmosphere.” A triplet, her sister, Sarah, and brother, Thomas, also attend Columbia State. 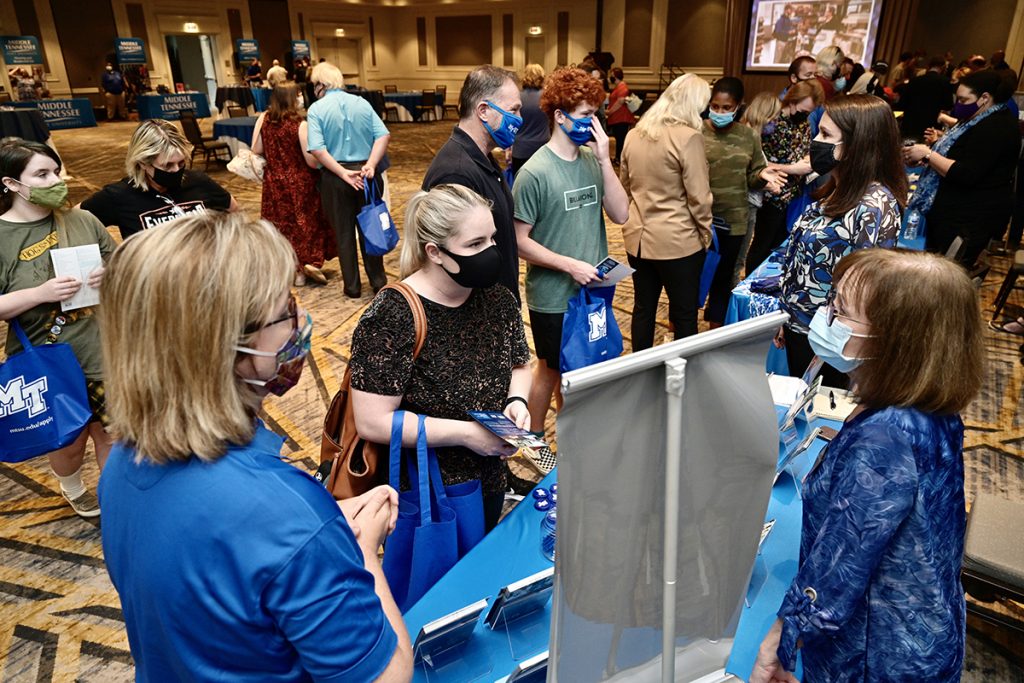 Courtney Lent, center, visits with one of MTSU’s academic colleges during the university’s True Blue Tour event recently at the Franklin Marriott Cool Springs. Lent, 32, will be returning as a student along with her stepson, Nathan Lent, 17, who will be a freshman in fall 2022, with plans to major in photography and minor in graphic design in the College of Liberal Arts. Courtney Lent plans to study psychology. She started at MTSU in 2007, but dropped out to enter the workforce. (MTSU photo by Andy Heidt)

‘One shining moment’ for college recruiter

Columbia State (Franklin campus) enrollment recruiter Stasa Bakliza, a native of Croatia now living in Bellevue, Tennessee, is also an MTSU doctoral student in history. In Franklin, he received $1,500 in scholarships from MTSU President Sidney A. McPhee — two $500 scholarships for Columbia State students and a $500 scholarship for himself when McPhee learned Bakliza is working toward his doctorate.

“It really made my day,” Bakliza said of the scholarships. “It was a wonderful public display of support — one shining moment — and MTSU left a great imprint on me by doing this.” 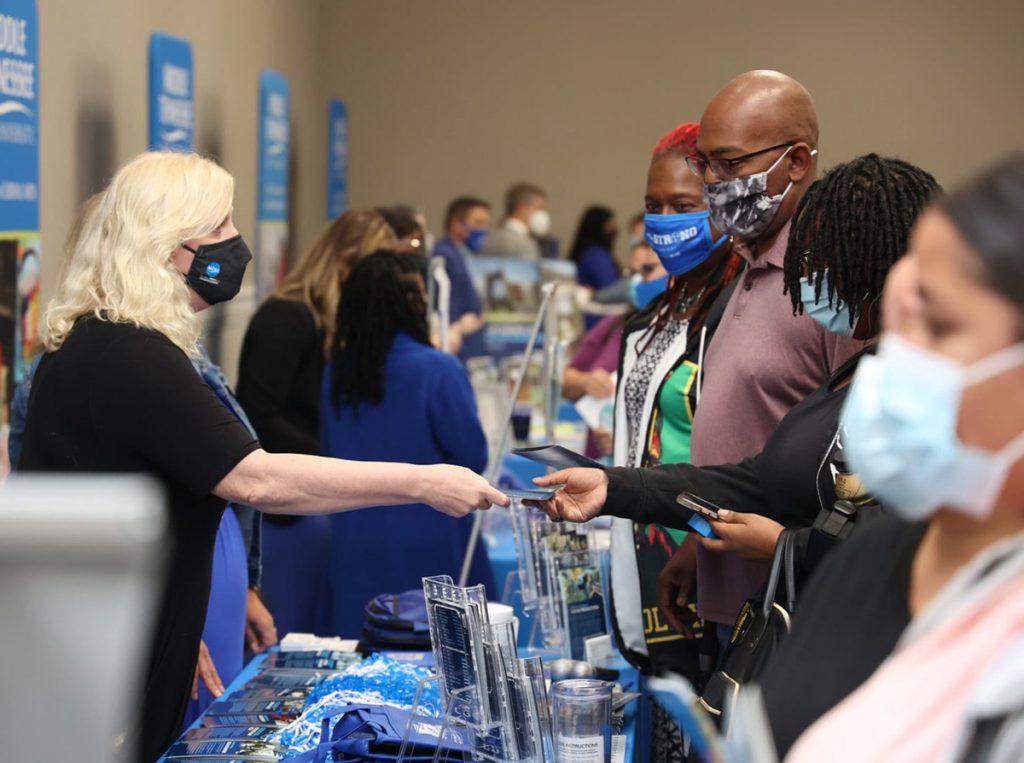 MTSU College of Media and Entertainment Dean Beverly Keel, left, hands information about one of her college’s programs to a prospective student attending the recent True Blue Tour recruiting event at the Millennium Maxwell House in Nashville. Dozens of students and their families attended the event, gathering material and getting their questions answered by MTSU staff. (MTSU photo by John Goodwin)

MTSU alumna Amy Cowell (’82) has no idea how many high school students she’s sent MTSU’s way in decades of counseling — and even helping students complete their Free Application for Federal Student Aid, or FAFSA.

Now a college and career choice counselor for Advise TN and based out of Cheatham County High School in Ashland City, Tennessee, Cowell received a $2,000 scholarship at the Nashville luncheon. With students, she “always talks about being an alumnus” of MTSU and the variety of programs the university offers. She was a psychology and sociology double major as a student.

A lucky break enabled Deron Young, 18, of Thompson’s Station to leave the Franklin event with a $7,500 scholarship. Another registered student left the building minutes before his name was announced. Young’s father, Deron, a former U.S. Marine, had quite the reaction when his son’s name was called next.

“I heard my name,” the teenager said. “It was a feeling of disbelief. My dad grabbed my hand. He was a Marine and a very reserved person. I had never seen him that excited. And, it was a very humbling moment, too. It’s a heavy burden off my plate and my family’s plate.”

The Independence High School senior has interests in aerospace and the medical field. He has a 4.0 GPA (4.5 weighted) and scored a 27 on his ACT. A member of the National Honors Society and school’s German Club, the younger Young said they waited until going home — with proof of scholarship — before sharing the news with his mother, Donna Young. 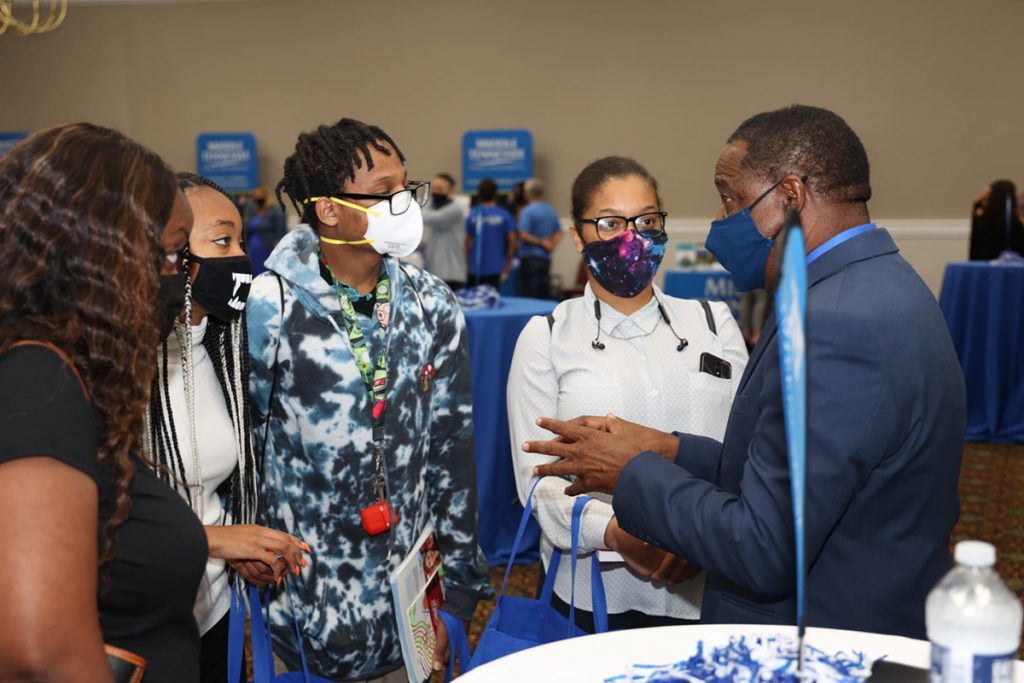 MTSU President Sidney A. McPhee, right, meets with a group of prospective students attending the True Blue Tour event recently at the Millennium Maxwell House in Nashville. The students and family members came from across the area, seeking information about the university to help them make their decision on a college choice. Numerous MTSU academic colleges and other departments answer questions and provide material they can take with them. (MTSU photo by John Goodwin)

“MTSU changed my life,” said Hibdon (Classes of 2012 and ’14), who is manager of strategic communications for the College of Liberal Arts, sharing at both the student reception and luncheon for counselors/community college staff. “I encourage you to go to MTSU. Come to Homecoming Oct. 30.” He also promoted study abroad and internships. His degrees are in history and a master’s in education (administration supervision).

Hogan (’93), who lives in Murfreesboro, said he had “a great MTSU experience that was a springboard for life.” He is director of driver services with the Tennessee Department of Safety and Homeland Security. His degree was in economics and finance from the Jones College of Business and he is in his second term on the Alumni Board.

“College life was fun,” Hogan said. For prospective students, his advice is to “set your expectations to move forward into secondary education. Have a plan and stick to it.”