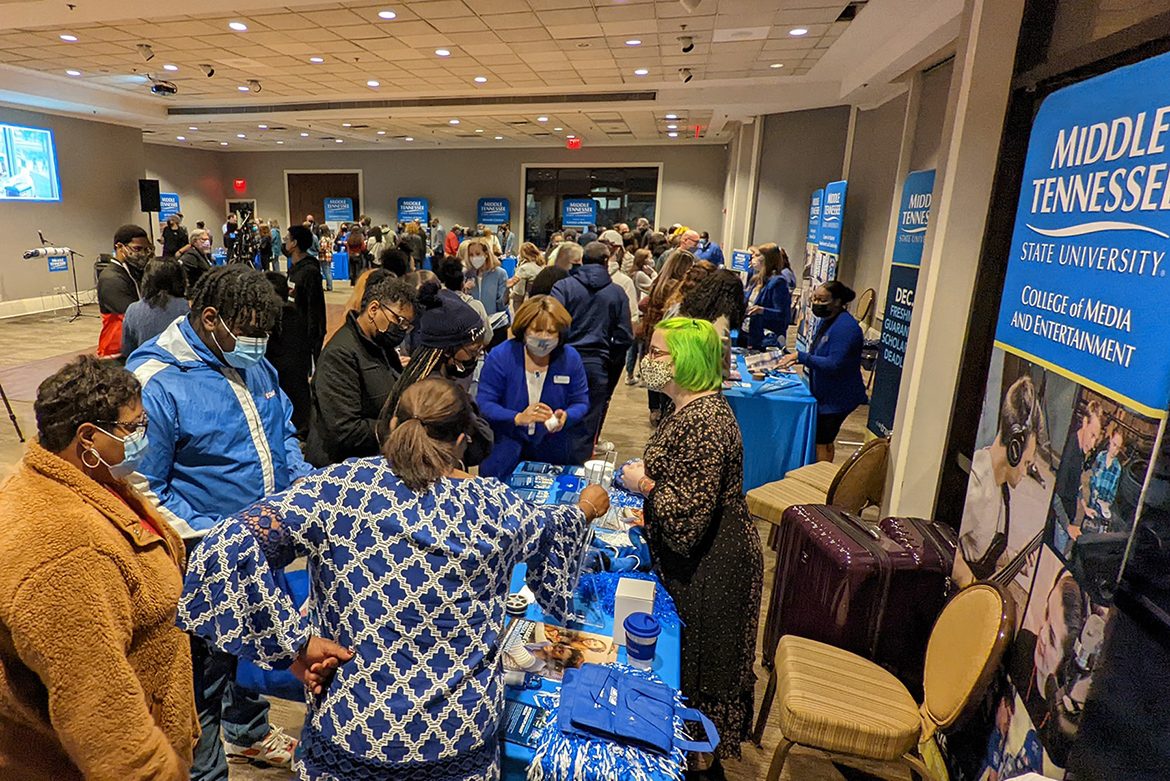 MEMPHIS and JACKSON, Tenn. — Kris Gendrich will be coming home when she enrolls at Middle Tennessee State University in August 2022, looking forward to a journey that, eventually, will lead her to a doctorate degree in research psychology.

A Murfreesboro native who attended the Discovery School and Central Magnet for middle school, Gendrich, 19, moved with her family to Arlington, Tennessee, when her father, Ken Gendrich, took an IT job with Methodist Le Bonheur Children’s Hospital in 2016 during a time when Kris experienced life-threatening health problems. 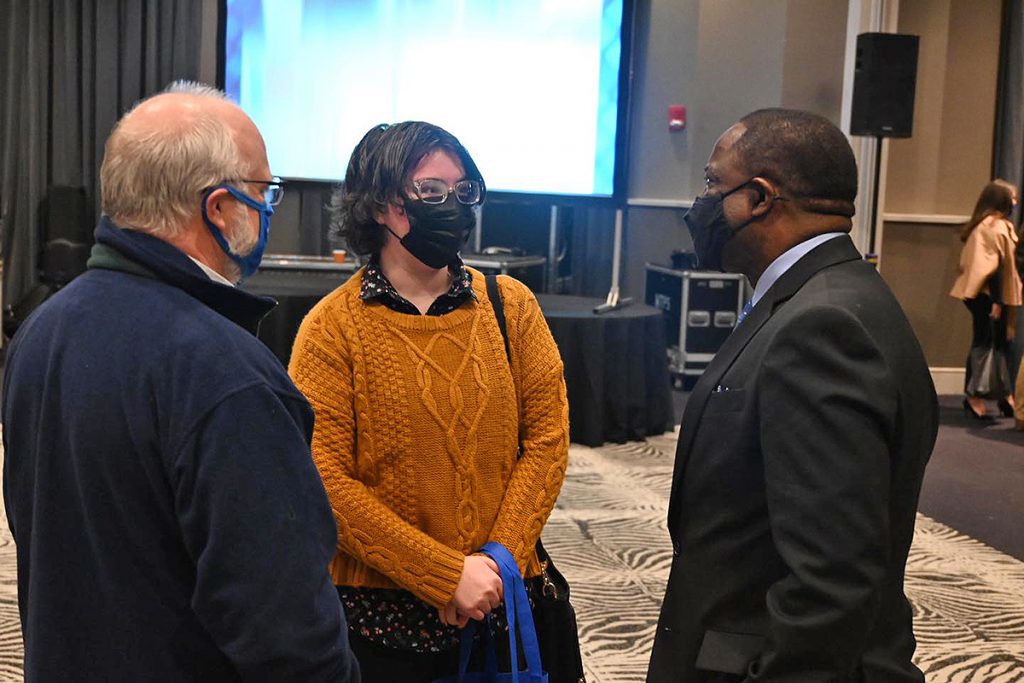 Father and daughter attended the True Blue Tour event recently at Esplande Memphis in Cordova, Tennessee, along with dozens of other Memphis-area prospects, including some from nearby Mississippi.

MTSU travels to 14 cities in four states during the fall to recruit potential freshmen and transfer students.

“It has been a journey for Kris,” said Ken Gendrich. “For five years, she battled a colon problem. They eventually removed the colon, and she’s been on a chemotherapy drug for two years.”

Kris Gendrich earned her GED. She was homeschooled, but the illness and medications constantly made her tired and she slept a lot. She scored a 32 on a practice ACT, giving her confidence to succeed in the classroom.

“I lived it, went through it. It’s just my life,” she said of her situation. As for MTSU, she said she has not applied, “but it is my No. 1 choice.”

Gendrich will be following in the footsteps of her father, who graduated in 2012 from the Master of Science in Professional Science program (healthcare informatics) and worked with the Experimental Vehicles Program; and her aunt, Susan Gendrich, an alumna with master’s and education specialist degrees, 2005 Tennessee Teacher Hall of Fame inductee and retired Cason Lane Academy principal. 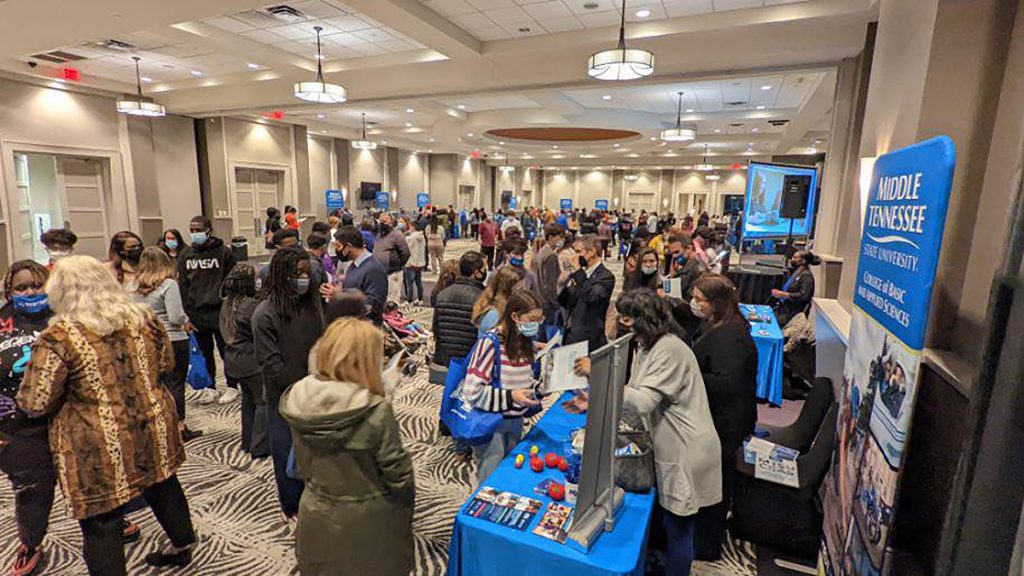 Alex Bolton, 18, of Henderson, Tennessee, loves history. His family laughs about it now, but he loves the subject so much it landed him in trouble — reading a history book during a middle school English class.

The Chester County High School senior also has overcome dyslexia, which was diagnosed in the third grade. By the eighth grade, his reading comprehension caught up — and he’s been a busy reader ever since.

At the Jackson Country Club recently, Bolton’s name was drawn by MTSU President Sidney A. McPhee for a $10,000 scholarship. He and his parents, Melissa and Dan Bolton, were elated. Earlier that evening, Alex Bolton said he had applied and been accepted for fall 2022 and he said no to visits to other campuses “because this is where I want to go.”

“This means so much,” Melissa Bolton said of the scholarship.

“I took a tour,” Alex Bolton added. “We got to the History Department and I saw how much they had to offer. This is an amazing campus. We visited five colleges in one week. Hands down, this was the best.”

He said he plans to major in history or environmental science, hoping to become a high school history teacher or a park ranger. 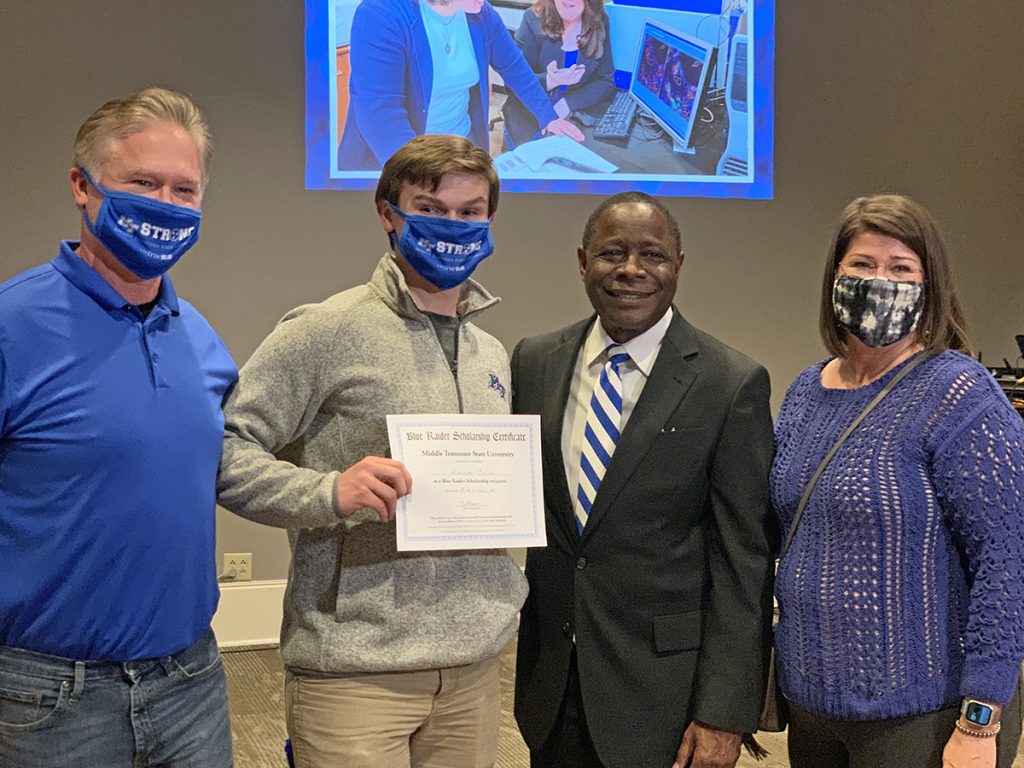 Alex Bolton, second from left, of Henderson, Tenn., holds the MTSU certificate he received after winning a $10,000 scholarship Nov. 4 at the True Blue Tour event at the Jackson Country Club in Jackson, Tenn. He is shown with his father, Patrick Bolton, left, MTSU President Sidney A. McPhee, and his mother, Melissa Bolton. Alex Bolton is a senior at Chester County High School in Henderson. He said he plans to major in history or environmental science, hoping to become a high school history teacher or be a park ranger. (MTSU photo by Randy Weiler)

“Graduating with honors allowed me to have the confidence to go to graduate school,” said Pimentel, giving a strong plug for the University Honors College. He said he got his start in higher education at MTSU, where he became assistant dean in the College of Liberal Arts. “Literally without my degrees at MTSU, I would not be where I am today.”

“The professors were fantastic. They were encouraging,” Pimentel added about his experience as an MTSU student and a friendship he formed with the late Ron Messier, professor emeritus in history, who taught Islamic history and historical archaeology from 1972-2004. Messier died Sept. 2.

Memphis attorney Brandon McNairy also shared about his extremely positive MTSU experiences, many of them in leadership roles. And, McNairy showed his True Blue giving spirit when he chimed in with an extra $500 added to a $3,000 scholarship awarded to Leshundra Triplett of Booker T. Washington High School during the Memphis luncheon.

“I loved my time at MTSU,” said McNairy, an industrial organizational psychology major who graduated in 2010. “This will help a student who wants to go there.” He was involved in Greek Life, Up ’til Dawn and was student body president … “I threw myself into MTSU. My time at MTSU helped me hone my skills.” 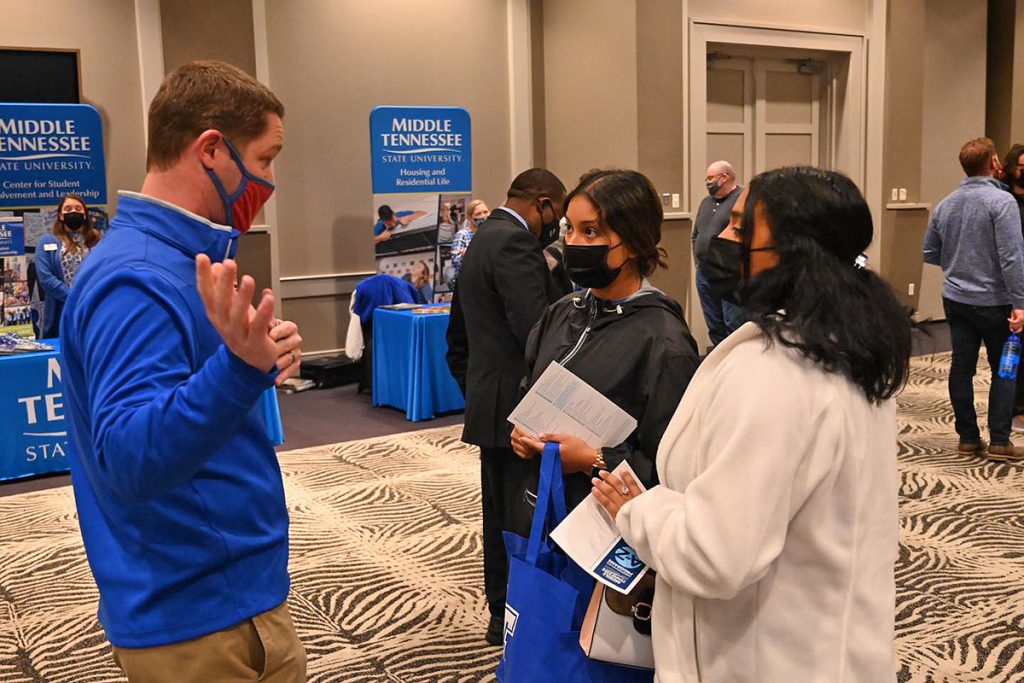 In a giving mood

Jackson and Memphis students and counselors/community college staff discovered a gold mine in the form of MTSU scholarship dollars. Combined, the president awarded $123,000 in scholarships during the West Tennessee student receptions and luncheons for counselors.

Dec. 1 is the deadline for prospective high school students to apply by and potentially receive a guaranteed scholarship if all requirements are met.

Feb. 15 is the deadline for prospective transfer students to get their paperwork processed and potentially qualify for a guaranteed transfer scholarship.

On deck: Louisville and Lexington, Ky. 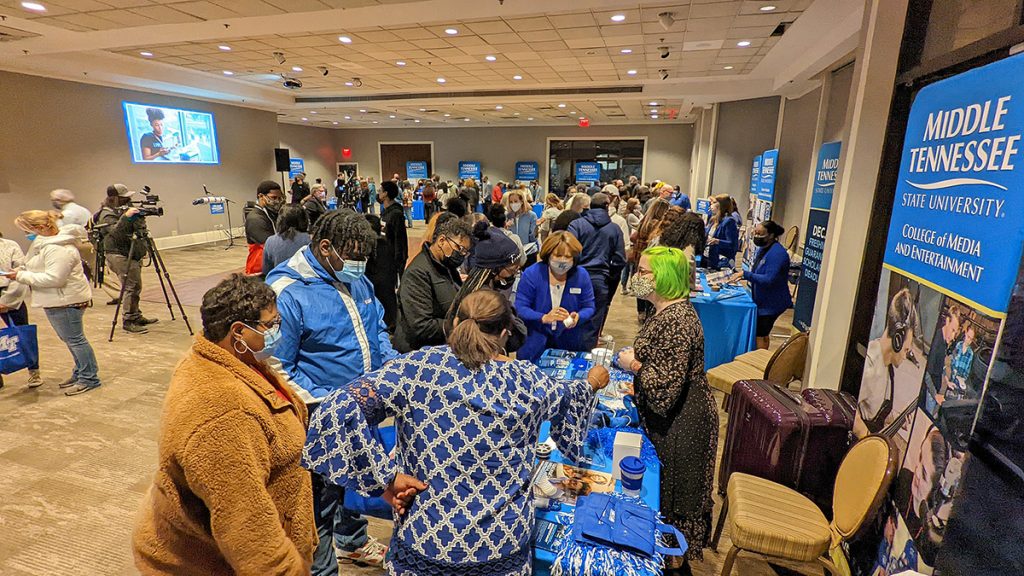 Prospective students attending the recent True Blue Tour event at the Jackson Country Club in Jackson, Tenn., meet with advisers and staff at the various MTSU tables set up with department and college information. Dozens of students and their family members from Jackson and the surrounding area attended the annual event. (MTSU photo by John Goodwin)