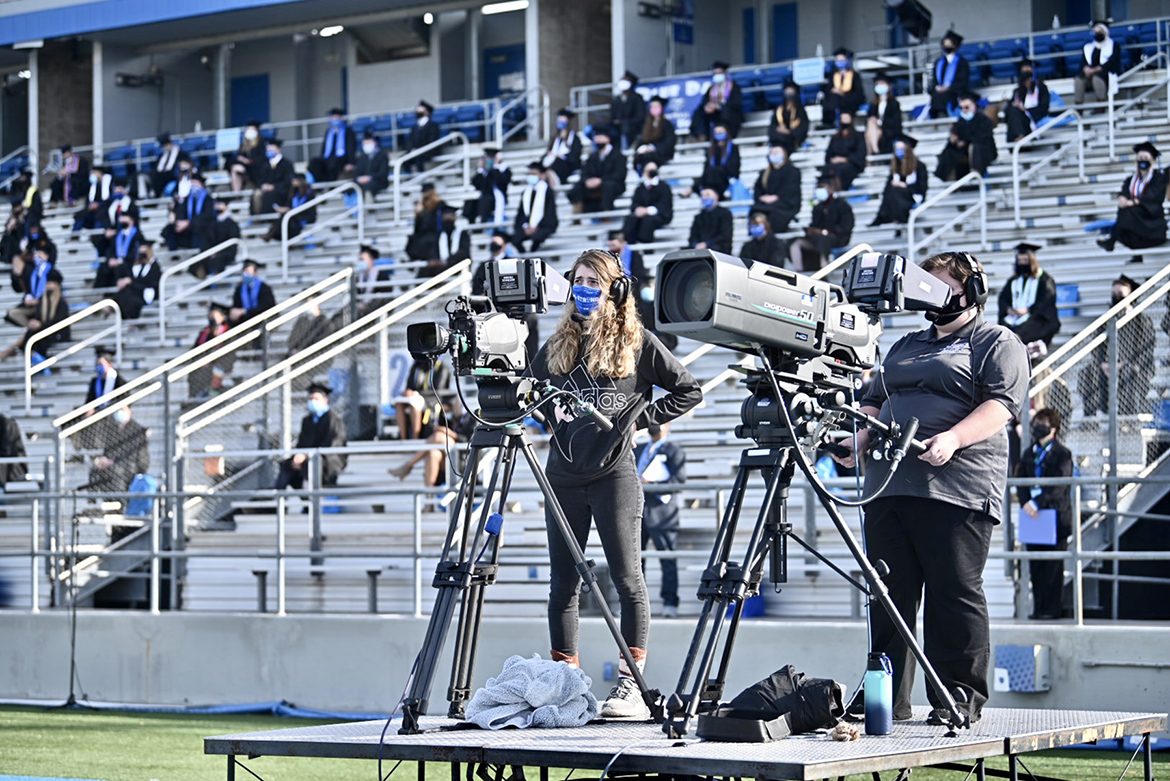 The three historic Nov. 21 ceremonies, which were held in Floyd Stadium under strict social distancing and health protocols because of the COVID-19 pandemic, honored roughly 1,700 December 2020 graduates, as well as almost 400 May and August graduates who wanted to experience an in-person celebration after their commencements for spring and summer were moved to a virtual format.

It was the first such ceremonies in Floyd Stadium since 1972. 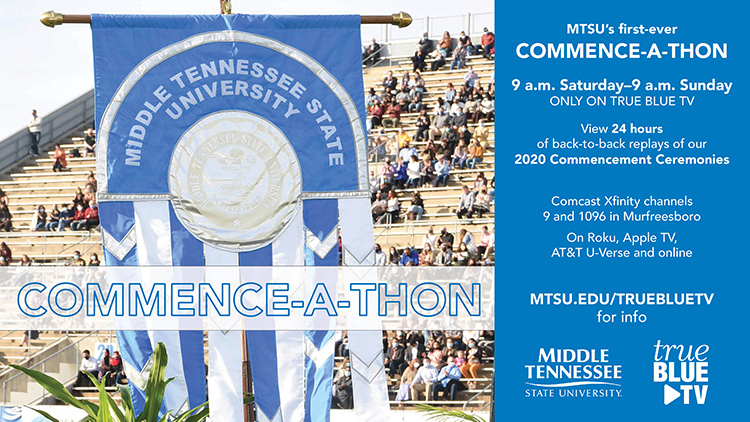 “We at True Blue TV thought this would be a fun way to further celebrate the achievements of our graduates — and a nice broadcast treat for the holiday weekend,” said Ty Whitaker, the station’s senior manager.

It also airs on channel 195 on DTC in Alexandria, Tennessee; digital channel 206 on United Communications in Chapel Hill; and as channel 99 on AT&T U-verse in Middle Tennessee. It is also available by searching for the “Education Resource Channel apps” on Roku, Apple TV and Amazon Fire TV. You can watch online at www.mtsu.edu/truebluetv. 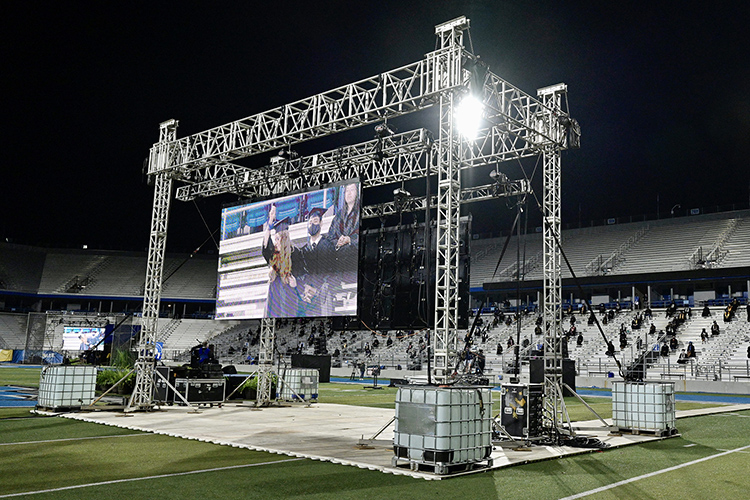 A large video screen displays one of the almost 400 graduates from May and August who chose to attend the Saturday, Nov. 21, outdoor Fall 2020 commencement ceremony at Floyd Stadium after MTSU moved its Spring and Summer 2020 commencements to a virtual format because of the COVID-19 pandemic. The three livestreamed ceremonies held Nov. 21 will re-air for 24 hours on Saturday, Nov. 28, on True Blue TV. (MTSU photo by Andy Heidt)

True Blue TV broadcasts from the Center for Educational Media, a part of the College of Education at MTSU, and operates under license from the Murfreesboro Cable Television Commission.

Students from the College of Media and Entertainment’s Department of Media Arts, as well as students working for the university’s Production Services team, produced True Blue TV’s live coverage of the Nov. 21 ceremonies. 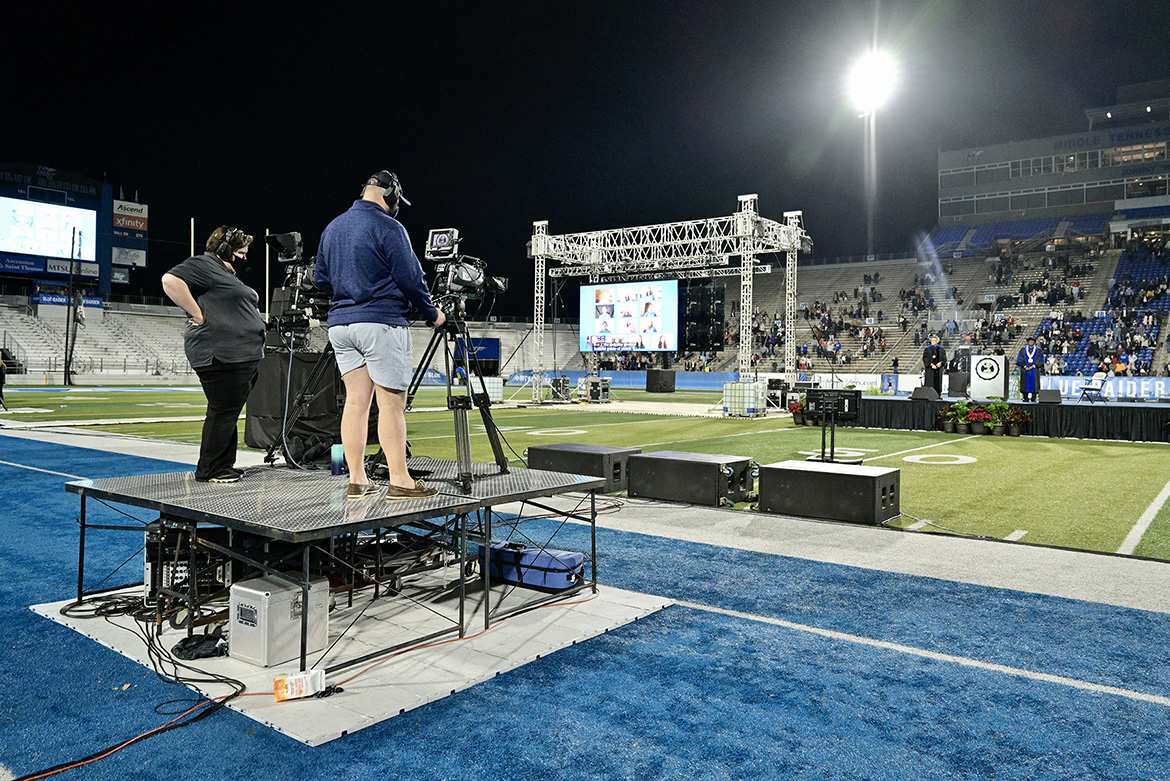 MTSU Department of Media Arts students capture the university’s fall 2020 commencement evening ceremony Saturday, Nov. 21, at Floyd Stadium as President Sidney A. McPhee, shown at right on stage, and Provost Mark Byrnes preside over the event. Students working for the MTSU Production Services team also produced the broadcast, which will re-air along with the two other ceremonies held earlier in the day, for 24 straight hours on Saturday, Nov. 28, on True Blue TV. (MTSU photo by Andy Heidt) 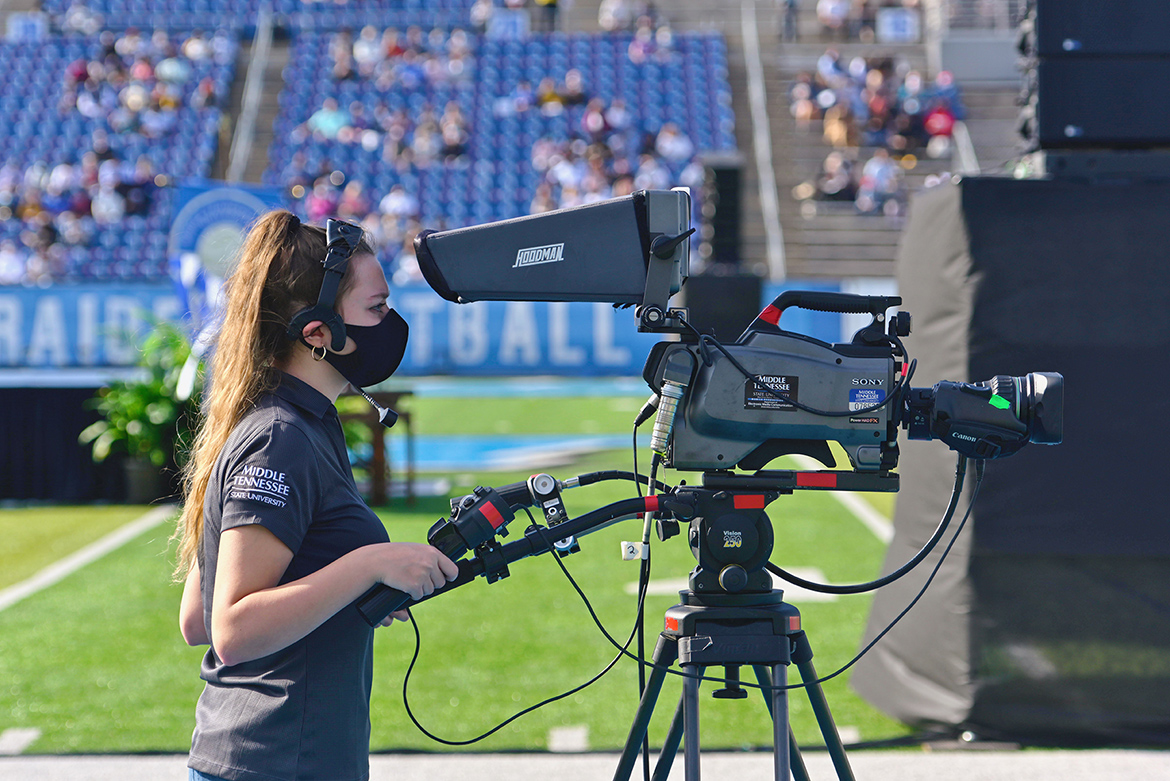 A student videographer captures live coverage of one of the three Fall 2020 commencement ceremonies held Nov. 21 at Floyd Stadium. Students from the College of Media and Entertainment’s Department of Media Arts, as well as students working for the university’s Production Services team, produced True Blue TV’s coverage. The three ceremonies will re-air for 24 hours on Saturday, Nov. 28, on True Blue TV. (MTSU photo)