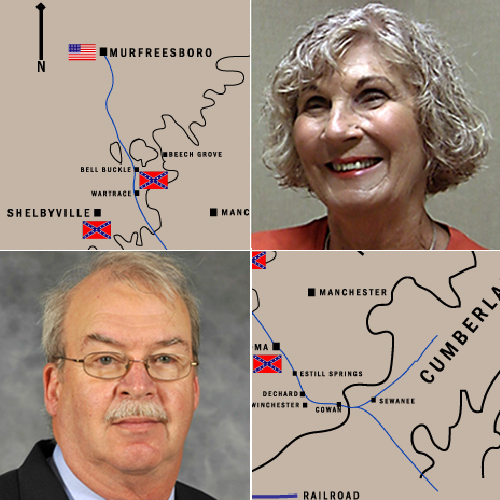 Two members of the MTSU community will lend their expertise to a daylong examination of one of the Civil War’s most heralded strategic maneuvers.

Among the speakers will be Dr. Vince Armstrong, an adjunct history professor at MTSU, and Shirley Farris Jones, a Civil War historian and retired MTSU employee.

The “Tullahoma Campaign” was a Union endeavor between June 24 and July 3, 1863, that resulted in the removal of the Confederate Army from Middle Tennessee. Maj. Gen. William Rosecrans maneuvered his Union troops around the Rebel forces of Gen. Braxton Bragg to cut them off from supply reinforcements.

You can learn more about the strategy of the Civil War’s “Tullahoma Campaign” at the MTSU Public History Program’s special “Backroads Heritage” website. Click on the campaign map above to visit.

Rebel units made their stand at Shelbyville and Bell Buckle, while the Union forces camped at Hoover’s Gap between Manchester and Murfreesboro. Bragg and his soldiers retreated first to Tullahoma, then to Decherd and Cowan and finally to Chattanooga.

Jones has been active with the Rutherford County Historical Society, the Association for the Preservation of Tennessee Antiquities, Friends of Stones River National Battlefield and the Martha Ready Morgan Chapter of the United Daughters of the Confederacy. She is the author of six books.

Other speakers include Nashville-Davidson County Historian Carole Bucy and historian and author Thomas Cartwright. Historian and documentarian David Currey will serve as moderator.

Topics to be discussed include “The Tullahoma Campaign and its Significance,” “Migration of Troops from Stones River to Chickamauga,” “Martha Ready Morgan: From Wife to Widow in 630 Days” and “Women and Spies in the Civil War.”

The Tennessee Department of Tourist Development and Tennessee’s Backroads Heritage, a nonprofit organization, are sponsoring the symposium. The registration fee is $95, which includes breakfast, lunch, an afternoon snack and a registration packet.