Students use Twitter to gauge public opinion in 1s... 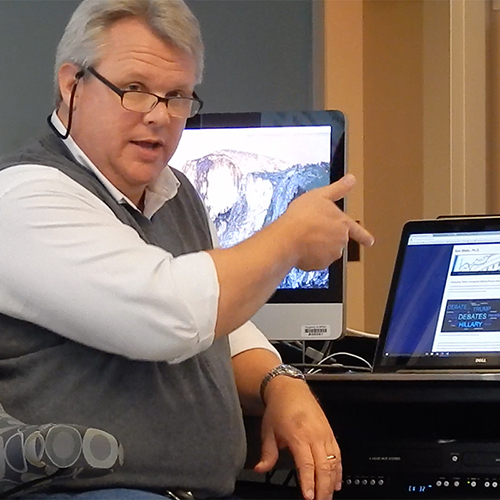 Guided by School of Journalism professor Ken Blake, director of the MTSU Office of Communication Research and the MTSU Poll, students plugged the #debates and #debate2016 Twitter hashtags into a special online tracking program Sept. 26 to compile data into spreadsheets. They wanted to see who was saying what, and where, to whom about the candidates and their comments.

MTSU journallism professor Ken Blake gestures to the informational website about his social media data collection project for the 2016 presidential election before the Sept. 26 Clinton-Trump debate. Blake, his colleagues and students are analyzing Twitter usage in real time during the election to determine who’s saying what about which candidate. (MTSU photos by News and Media Relations)

“We’ve only had in-class examples before now, “ said media and communication graduate student Troy Dixon of Nashville, “and a lot of times that’s been real data, but this is the first time we’ve tried it live.

“We’re trying to discern patterns, to see what moments in the debate generate conversation and what that conversation was, to get a feel for public opinion.”

School of Journalism lecturer Dan Eschenfelder, a former TV news director, told the students that a former colleague’s full-time job used the same sort of data they were studying.

“He studied all the information like this and sent out blasts throughout the company,” Eschenfelder said. “He could analyze it and tell each individual (news) station their pinpoint perfect times to post something or tweet it because of that data.”

MTSU students listen during the Sept. 26 Clinton-Trump debate in the Bragg Media and Entertainment Building while preparing to study Twitter usage data about the event.

Unfortunately, despite Blake and his students’ detailed research and preparation, the website they used wasn’t quite up to the task it touted and lacked the real-time tweeting information their project needed. They tried a desktop version of the program and it responded better, Blake said.

“This was kind of a warm-up for the next debate,” an enthusiastic Blake said, more than an hour after the event ended and students were beginning to leave the lab. “We’ll be trying to come up with a more reliable system for gathering our information … and get a process we can rely on for our live election night coverage (on MT10 News).

“The availability of good data related to public affairs on the web has really exploded in the last five years,” he continued, recalling his own recent analysis of severe structural issues with nearly two dozen Rutherford County bridges thanks to extensive Federal Highway Administration reports.

“Journalists who know how to use these techniques and analyze this data really have an edge. It’s also the kind of journalism our system needs right now.

“It’s very difficult to know what the facts are; everybody’s got their different takes on the facts, and data analysis can offer clear-eyed, clear-headed indications of what really is true.”

Added Hixon, “The aspect I’m most interested in is determining what shapes public opinion and finding ways to measure it. It’s not like you can pick up some magic indicator that shows you what public opinion is. Being able to analyze social media in that way is very helpful.”

MTSU School of Journalism lecturer Dan Eschenfelder listens to comments from students and colleagues after the the Sept. 26 Clinton-Trump debate in front of a list of times and notations on comments made during the TV event. Eschenfelder is helping MTSU journalism professor Ken Blake and their students analyze Twitter usage in real time during the election to determine who’s saying what about which candidate.

The experiment will continue through the presidential and vice presidential debates onto election night Nov. 8. You can learn more about the project at http://drkblake.com/analyzingtwitter.

You can see how data journalism lays the foundation for news stories by reading Blake’s bridge safety report, complete with interactive map, at http://thedatareporter.com/rutherfords-bad-bridges-2015.