March 14 is deadline for cours..

A criminal appeals court judge said Thursday, Feb. 18, that the answer to America’s problems lies not with politicians but with people who commit to do little things every day to greatly improve their society.

“I honestly think the answers come from people who are here today, the people that you are honoring and celebrating today,” McMullen said.

McMullen acknowledged that, despite the efforts of “unsung heroes” like the luncheon’s community-minded honorees, society seems to be fighting some of the same battles over and over, including “the fact the United States Supreme Court has now reversed certain pivotal portions of the Voting Rights Act and now could possibly revisit landmark cases that affect affirmative action.”

McMullen encouraged the audience to appreciate that our country’s differences make it stronger and reminded them that all people must work together for the common good.

An MTSU tradition since 1996, the Unity Luncheon celebrates unsung community heroes age 60 or older who have lived in the Middle Tennessee area for 25 years or more and who have made outstanding contributions to their society in education, community service, black arts, sports or as advocates of civility. 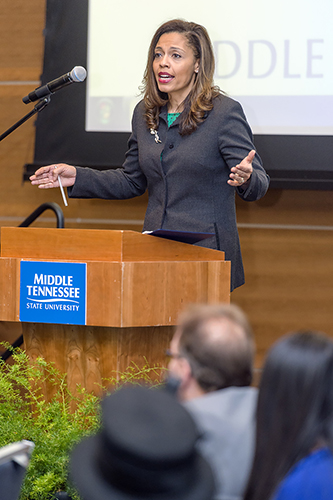 Judge Camille R. McMullen of the Tennessee Court of Criminal Appeals addresses the audience at the 2016 MTSU Unity Luncheon Feb. 18 in the Student Union Ballroom. (MTSU photo by J. Intintoli)

This year’s honorees were:

• Ray Fite, a delegate to district association ministries and state convention who also performs many other duties for Cherry Grove Missionary Baptist Church in Murfreesboro.

• Joe Herbert, Rutherford County educator and administrator for more than 40 years and an advocate for education.

• The Rev. Robert D. James, pastor of St. John United Methodist Church in Murfreesboro, former assistant principal at Murfreesboro’s Riverdale High School and a three-time NFL Pro Bowler as a Buffalo Bills defensive back from 1969 to 1974.

• The Rev. H. Bruce Maxwell, pastor of Lake Providence Missionary Baptist Church in Nashville for 40 years and a member of Belmont University’s board of trustees.

• Russell D. Merriweather, a volunteer for AARP in the Nashville area and 2010 recipient of Tennessee’s AARP Andrus Award for Community Service.

• Albert Nelson, minister of Sand Hill Church of Christ in La Vergne, Tennessee, a member of Friends of Bradley Academy and a mentor to fifth- and sixth-grade boys through a Delta Sigma Theta program.

• Florine Ratliff, an MTSU alumna and teacher for 30 years at Mitchell-Neilson Elementary School in Murfreesboro.

Gaines, who retired in 2015, served the city for 35 years. He was the department’s first African-American inspector, shift commander and deputy chief. 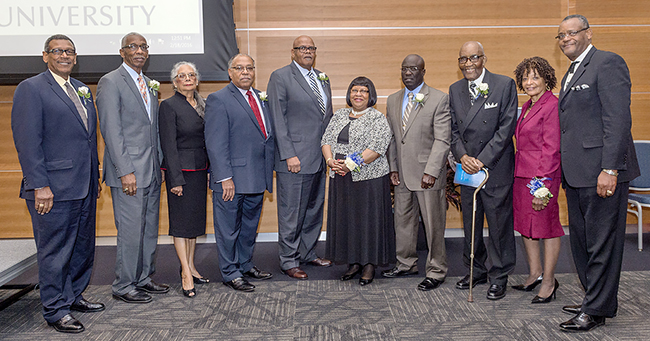 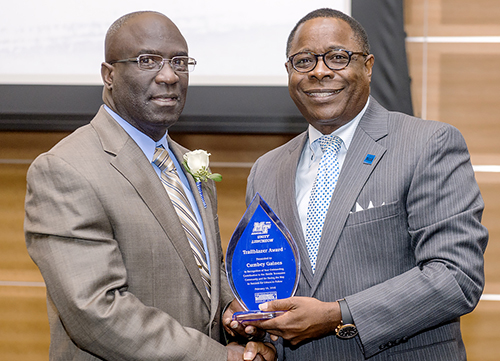 Former Murfreesboro Fire and Rescue Department Chief Cumbey Gaines, left, accepts the 2016 Unity Luncheon’s Trailblazer Award from MTSU President Sidney A. McPhee during the Feb. 18 luncehon in the Student Union Ballroom. Gaines, who retired in 2015, served the city for 35 years and was the department’s first African-American inspector, shift commander and deputy chief. 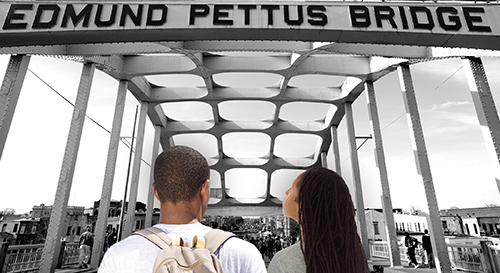 Click on the illustration for a link to MTSU’s complete 2016 Black History Month event calendar.